Precious metals and the junior miners are testing multi-year lows, while the large cap equities and US dollar are hitting multi-year highs.  Things couldn't be worse for junior mining investors who have been in this sector for decades, yet it couldn't be better for GST subscribers who have seen some of our featured companies make exponential gains.

Many have left the sector or are paralyzed by disbelief of the loss of years of gains.  Over six hundred mining companies are on the verge of bankruptcy and even former market darlings such as Allied Nevada are going by the wayside.  Many of the gains from the previous bull markets have been completely wiped out.  Look at the downfall of major firms that in the past highly leveraged in this sector.

Only the strong survive in this market and only the intelligent investor can win.  In a junior bear market, 99 out of 100 stocks fail.  Finding those select few that outperform the indices and even better are ten-baggers requires a lot of research and constant evaluation.  Junior mining remains one of the few places where if you do your homework you can make unbelievable returns.  It only takes one ten bagger to make up for several small losses.

Now at these bear market lows many of these assets are trading at ridiculously low valuations the opposite of where they were back in 2010 and 2011.  This is the best time to find the ten-baggers at bear market lows.

This may be the worst time for the junior gold sector which is also the best time to buy the high quality junior miners which can outperform the (GDXJ) Junior Gold Mining ETF.  For instance, in July of 2014 I found Red Eagle Mining (RD.V or RDEMF) a company with a great high grade gold asset in Colombia.  I believed that Red Eagle would get its permit after doing my homework despite the market's concern that no modern mine had yet been permitted.

Red Eagle Mining (RD.V or RDEMF) just reported this week that the final license has been granted for construction and mining at their San Ramon Gold Mine near Medellin, Colombia.

For close to nine months I have been highlighting this story which recently made the Top 50 TSX Venture companies in 2014.  It has one of the best economics in the junior gold sector yet was completely ignored as it was located in Colombia which at the time did not yet permit a modern mine. 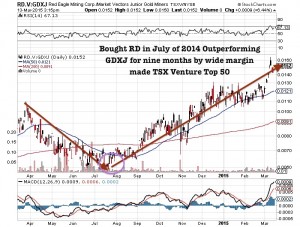 I decided to take a trip down there last summer and research the situation myself.  I came back impressed.  I saw the Environmental Impact Assessment included the support of two Colombian Universities and Tetra Tech.  I met with the local permitting team in Santa Rosa who was straightforward, competent and transparent. 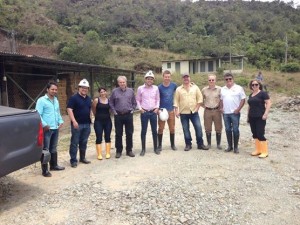 This permit is a major milestone for Red Eagle who has been working on this for over three years and I expect a major rerating higher as they begin construction and complete the project financing which was contingent on receiving this permit.  Commercial production is set to begin in 2016.

As I stated in this update when the stock was trading around $.20, “With less than a $14 million market cap Red Eagle may represent a deeply discounted bargain which could possibly triple in value in the near term. Production could begin in 2016 and dividends could come quickly as cash costs lead the industry below $600 an ounce with a high IRR of 52%.”

The current market cap of Red Eagle is around $25 million.  The stock could double from here to reach half of NAV which would make a fundamental target of around $.60 which could be a near term partial profit area as it could take time to absorb some of the overhead resistance at that price level. 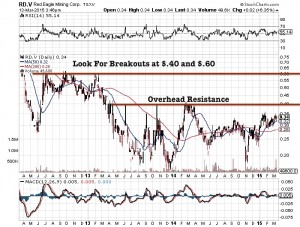 For those that could be concerned about why the stock did not move after the news release one should remember that there is overhead resistance at $.40 and $.60 where one should expect to see selling from old time investors who bought higher and want to recoup losses at break even prices.  I believe as the project is financed and as the gold market recovers that Red Eagle could test and breakout of all time highs past $.60.  At that point there should no longer be any selling pressure from the left hand side of the chart as it moves closer to production and cash flow in 2016.  It could eventually be $1+ stock in 18 months if the gold market bottoms.

Disclosure: I own Red Eagle and they are a website sponsor. Conflicts on interests apply as I would benefit if the share price goes higher.