Returning To A Gold Standard: Why Gold and Silver are Beginning This Historic Breakout

Owning gold (GLD) and silver (SLV) goes back to the times of the Bible.  Gold and silver was used in religious rituals since the beginning of civilization.

Exactly 2020 years ago from today, during the times of Alexander the Great, Egypt took the Jews to court demanding restitution and using the Bible as proof that the gold and silver was rightfully the Egyptians.

Responding to the Egyptian claim, The Jewish defense team brought proof in the Bible that 600,000 Jews were enslaved for generations in Egypt and asked the court to calculate how much they are owed in hourly wages as a reparation and come to a fair decision.

The Egyptians dropped the case and didn't respond.

Even in the Bible we see how important it was for the Jews to possess gold and silver despite going into an inhabitable desert.  There are hundreds of references to the use of gold and silver in the Jewish Tabernacle and Temple.  This should be a lesson in our times to increase our own exposure to real value and money as defined by the Torah or Bible.

Remember during WWI there were more than 50 countries on a gold standard where currency could be exchanged for gold.  Then in 1971 the US ruled no countries could back their currencies with gold.

However, there are some astute countries over the past several years continuing to increase their percentage of gold bullion in their central reserves.  Individuals should use corrections in precious metals as accumulation periods.

For years I have been highlighting precious metals as a store of value and high quality gold explorers and developers with the potential to leverage those gains, despite them being completely out of favor.  Seeing a historic irrational correction in gold and silver, exacerbated by manipulation from several banks, I continued to highlight the virtues of patience and fortitude.  I also tried to teach the virtue of ignoring the news and the mass media whose attempt is to make you off balanced and misdirecting you to sell your precious metals so you can buy into inflated sectors on the verge of their own crash like Bre X, Enron, Counrtywide and Bernie Madoff. 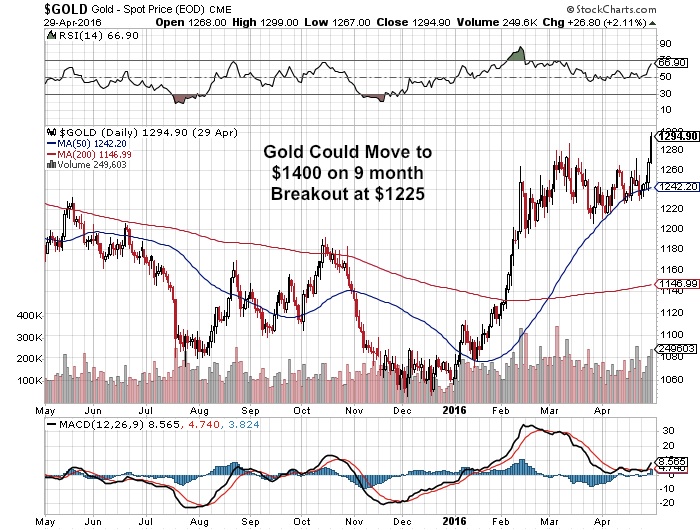 I continue to believe that we have just started a new uptrend in gold, silver and the miners.  Silver could even outperform gold by a large margin.  I am comfortable owning gold, silver and high quality junior miners as the global fiat currencies in my opinion are going to zero.  History proves that all fiat currencies come and go but gold and silver since the times of the Bible continue to hold its value. 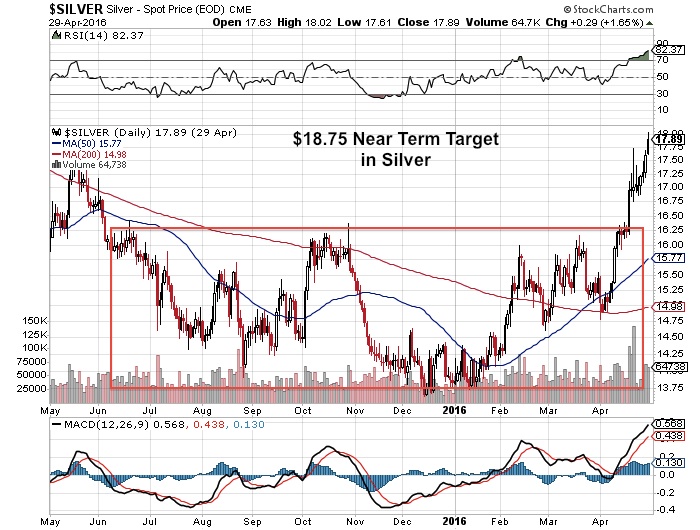 The trillion dollar bailout of government banks and quantitative easing is a horrible travesty to the American people and may have dire consequences.  These bailouts and currency devaluations could send gold soaring to new all time nominal highs way past the peak we hit in 1980. Eventually society will return to some sort of a gold standard but at that time the US Dollar may have lost a large part of its value.

Caution is warranted short term as the price is now trading way above recent moving averages and indicators are way overbought.  However, during early stages of a bull market overbought readings tend to last a long time so we will watch.

The past forty five year experiment of dropping a gold standard may come back to haunt the world as hyperinflation may be inevitable over the next few decades.  Gold and silver is still cheap despite hitting new 52 week highs.  Remember it hit a high of around $1900 back in 2011.  Gold (GLD), Silver (SLV) and the Miners (GDX) just now beginning to breakout of classic cup and handle patterns it could surpass those highs in 2016.  Eventually leading to a move $2800 or possibly higher.  Stay posted.

The junior gold miners may be going to surge even more in percentage terms.

1)This junior gold miner closed on a $10.8 Million equity financing from new institutional and corporate shareholders and this will hopefully take them all the way through the Feasibility Study on a high grade, underground gold silver mine in the Golden Triangle in British Columbia.

2)This high grade gold developer in Ontario is raising $2 million CAD from Haywood that should take them through Feasibility.  It could be rerated as they are high grade and advanced gold asset in Canada with great location and infrastructure.  I suspect a major or mid-tier should think to partner here as well in 2016.

3)This Nevada junior gold miner on the Cortez Trend just got two major votes of confidence with investments from a Mid Tier Producer and a well respected Gold Fund based out of NYC.  They could be onto something significant as they now have the funding to do some major gold exploration.

Disclosure: I own these three junior miners and they are all website sponsors.  I participated in several Private Placements and plan to participate in future ones.  They are all website sponsors and I have positions so I do have a conflict of interest and would benefit if share prices increases.  This means you must do your own due diligence.  I may buy or sell for many reasons without notifying my readers. Consult with a registered financial advisor which I am not.