Over three years ago on April 28, 2011 at a time when investors were piling with two fists into gold and silver etf's I wrote in this popular article published on Seeking Alpha, "The virtues of gold (NYSEARCA:GLD) and silver (NYSEARCA:SLV) are being addressed far and wide. My readers know the steady drumbeat of praise that is reaching a crescendo for the white metal scares the hell out of me.  A parabolic rise has formed in silver and gold... Please note that at these times of extreme optimism volatile pullbacks become more prevalent. Parabolic rises must be approached with caution."  At that time all over the mainstream media huge gold predictions of $5000 were forecasted as Central Banks became net buyers of gold for the first time in many years.

The Chinese and Russians were some of the largest acquirers of physical gold.  Also large hedge funds some managed by industry giants such as Paulson, Soros, Rogers and Einhorn began buying ETF's and junior miners.  This led to a parabolic and overbought move in precious metals, which I cautioned my readers about in the referenced article above.  It should be noted a few days after this article was published silver topped at $50 and gold rolled over a few months later at $1900. 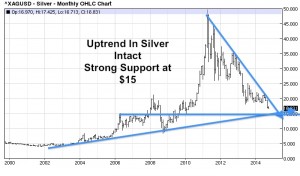 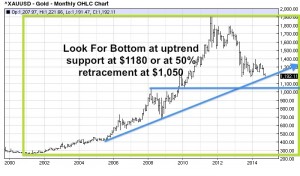 It is evident that both precious metals are in a long term secular uptrend, yet the mainstream is completely cold on gold and silver, the exact opposite of what was happening in 2011.  Now we hear the steady drumbeat of the shorts who say deflation is here to stay with low interest rates.  They say stick to financial assets like the dollar and large caps which brings music to my contrarian ears.  Low interest rates and low inflation do not last forever.  They fuel asset bubbles which burst.

The best investments are found with real assets in neglected sectors such as the junior miners which are trading at historic discount valuations.  The junior mining sector has grown completely out of favor which gives me excitement in continuing my search for the best real assets in the world when there is not much competition.

The junior gold mining sector is completely ignored by the retail public, which makes contrarian investors who accumulate real assets content as they can find the best deals at big discounts.  Now the same momentum funds that were piling into gold and silver in 2011, have been buying real estate, the dollar and S&P500 ignoring our sector.

For the past three years the US economy has had low interest rates with supposedly low inflation.  How long can that last when governments all over the world are using the printing press like never seen before?  The financial markets are 100's of trillions of monopoly money not backed by anything.  Remember all the gold ever mined is under $7 trillion.  The US government alone has a $17 trillion debt.

I will continue to search all over the Earth for the best real assets to hedge against inflation and decline of paper currencies.  The worst way to hedge against inflation is by buying inflated assets.  Right now, the S&P500 and dollar are historically overpriced, while real mineral properties can be bought for virtually pennies of a penny on the dollar.  Despite record demand for gold and silver coin sales, the price continues to drop because of the strong dollar providing deeper value for acquirers of the most reliable form of money known to man.

On another note, the dollar is very strong right now moving parabolically, but that could be a trap.  There are many potential black swans to change this trend of rate hikes.  Ebola, Jihad Terrorism, Ukraine, Iraq and now China crackdown on Hong Kong Protestors could spiral foreign exchange and commodity markets out of control.  Gold and silver is the best financial hedge against war, uncertainty and instability.  It may be time now if you are sitting in cash to diversify into physical gold and silver and the highest quality junior miners which have top properties, strong treasuries and experienced management teams.

Check out these high quality situations making great progress and holding up during this liquidity crisis.

1)These two juniors with some of the best undeveloped US assets have tripled in 2014 despite one of the toughest markets in junior mining history.  They are two of the best performers in the resource sector in 2014.

2)This small junior miner is hitting great high grade gold results in Nevada and has attracted two major NYSE producers as significant shareholders.  This high quality discovery is far outpacing the market this year as it is up 160+% while the GDXJ is flat.  It was just announced that Hecla added to its position in the junior miner.

3)I expect the shares of this junior miner to lead when the sector turns as there are very few advanced high grade economic projects with a mill in a well known stable jurisdiction of Val d'Or, Quebec. Don’t forget Osisko received top dollar from the majors Agnico and Yamana and that was much lower grade. I wouldn’t be surprised after this mill acquisition if they are the next takeout target in Quebec as the major need high grade, low capex projects to replace higher cost marginal production.

4)This junior miner is possibly weeks away from receiving its final permit to begin mining operations in Colombia. This could be huge for the entire Colombian mining industry as it could be the first permitted modern gold mine.  They received the Mine Plan Approval and are just waiting for the last environmental license.  The feasibility study showed that at $1300 gold the internal rate of return is 52%. This mine may have one of the best economic profiles in the junior industry.   Once the permit question is resolved I expect a large mid-tier to buy it out.  Even a gold correction shouldn't hurt this junior as there all in sustaining cash costs are low at $758 an ounce.

Disclosure: I own all these companies and they are all website sponsors.