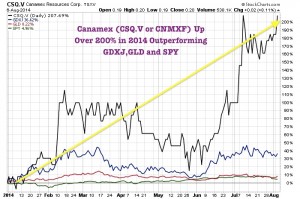 However, one of the junior gold miners that I predicted would be a major winner back in December of 2013, Canamex Resources (CSQ.V or CNMXF) has far outpaced the mining and overall market indices by a wide margin.  Canamex is up over 200% in 2014.

To see why Canamex is a winner and major outperformer please review all of my reports on Canamex by clicking here...

Watch for the GDXJ to make a cup and handle breakout at $46. Also Canamex is once again on the verge of a major breakout at $.20.  Three weeks ago I sent out a report with this chart to my premium subscribers.

The entire sector may be bottoming but stick to the winners who are outperforming in 2014 like Canamex.  Despite gold being up only 8% in 2014 real high grade discoveries near surface in Nevada like Canamex are being recognized by the market.

In the 2014 drilling season Canamex appears to be finding more of the high grade.  They were recently halted due to exceptional results from hole B-1425 which hit over 44 meters of close to 7 gpt gold.

Listen to my recent interview with Canamex CEO Greg Hahn by clicking here...

Mr. Hahn is a Professional Geologist and Geological Engineer, who has over 35 years of extensive experience in exploration and mine development. Mr. Hahn has held senior level management postions with several public mining companies, where during his career, he has used his expertise to take projects from mine development through to production, these include; permitting, engineering, construction and operations for Constellation Copper Corporation, construction and operations for two open pit heap leach gold and silver mines with Coca Mines Inc, exploration for investment opportunities in Latin America for St. Mary Minerals Inc., as well as, exploration and pre-development for Noranda Inc. Additionally, Mr. Hahn has been instrumentally involved in financing and mergers for Metalline Mining Company, which resulted in significant market cap increase and Marathon PGM Corp, which sold in 2010 for $170 million. Mr. Hahn holds a B.A. in Earth Sciences and an M.S. in Geology and Geological Engineering.

Disclosure: Author is a shareholder and Canamex is a website sponsor.  Beware of any conflict of interests and make sure to do your own due diligence.