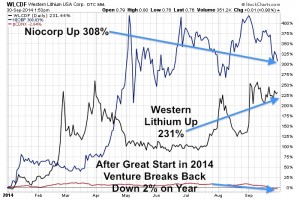 After a great start in 2014, the TSX Venture which is the index largely comprised of junior miners has headed into negative territory in 2014 down 2% in 2014.  Don't be surprised to see the US multinational corporations face headwinds from dollar strength.  Already the Homebuilder ETF (XHB) is already rolling over and breaking below the 200 day moving average as US real estate becomes more expensive for overseas investors.  The financials could be the next one to correct. The rising dollar is putting pressure on commodities priced in dollars.  Gold and silver is struggling in new low territory.  However, some US focused mining assets critical for domestic manufacturing and industry could actually be an area of strength.

Despite the major dollar rally and selloff in commodity related mining stocks, two of our featured companies have done exceptionally well this year up 308% and 231% in 2014.

1)Niocorp (NB.V or NIOBF) is up 308% on the year as they advance the highest grade undeveloped niobium mine in North America.  Niobium is critical to make steel lighter and stronger.  They just announced a metallurgical update which demonstrated a 98& recovery of the niobium at the bench scale along with the critical metallurgical flowsheet.  A flowsheet is a prerequisite for the pilot plant that will need to be built in order to publish a bankable feasibility study.    “The metallurgical program has advanced quickly since April, and has delivered high metallurgical recoveries across the process steps that have been tested to date” stated Mark A. Smith, CEO of NioCorp.  “We look forward to moving quickly through the balance of the metallurgical test program as we continue to de-risk the project through increased technical knowledge of this world-class deposit.”  Niocorp is forming a consolidation since May and may breakout of a symmetrical triangle at $.80.  They are currently raising $16.5 million in which senior management is putting in $2.5 million.  I expect that the closing of this financing could be a major catalyst to take Niocorp to a $1.15 target. 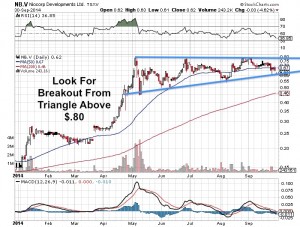 2)Western Lithium (WLC.TO or WLCDF) is up 231% on the year on the major advancement of Tesla and Panasonic to develop a major $5 billion battery manufacturing center near Western Lithium's Kings Valley Lithium Deposit in northern Nevada.  Western Lithium is advancing its lithium deposit at the same time the company may be able to generate near term cash flow by selling organoclays from the property that is needed in fracking.  Today, Western Lithium announced a distribution agreement to sell the products in five US states, Texas, Oklahoma, Arkansas, Louisiana and New Mexico.  This is a major advancement for Western Lithium to find a well known distributor to sell the product to drillers.  Production is imminent and could startup as early as November.

Disclosure: I, Jeb Handwerger, own both Niocorp and Western Lithium and they are both website sponsors.