1) Lithium Ion Battery Market is growing rapidly over the next 5-7 years.

4)Pay attention to Western Lithium (WLC.TO or WLCDF) who is developing a lithium carbonate pilot plant in Reno, Nevada and could be a major U.S. lithium supplier in the coming years.

For years I alerted you ahead of the herd about the potential growth in the lithium-ion battery market needed for electric vehicles, grid storage and mobile electronics.  I was way ahead of my time highlighting lithium and graphite miners as they are both critical materials for lithium-ion batteries.    I have remained bullish and have been waiting for a significant catalyst to turn this sector. 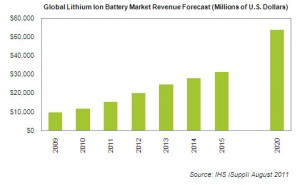 The recent news that electric car maker Tesla (TSLA) is planning to construct the biggest lithium-ion battery plant right here in the USA may be validating our long term buy and hold investment thesis in this once ignored sector.  Tesla has announced that they are planning to produce an affordable electric car for the US market within three years.

This is a huge catalyst for the North American lithium and graphite miners who will be able to supply companies like Tesla who is planning to build the biggest lithium-ion battery factory in the World right here in the Western USA.  Battery manufacturing could be a major area of economic growth over the coming decades.

Similar to the internal combustion engine, lithium-ion batteries could revolutionize transportation over the coming decades and reduce the world's carbon emissions.  Tesla has a market cap of $31 billion and may now be on the lookout for some of our lithium and graphite juniors in North America that we have been writing about for many years that are still trading for pennies on the dollar.

Most lithium comes from either Chile/Argentina (71%) or Australia (26%).  Mostly all of the Australian Lithium goes to China.  Keep a close eye on Western Lithium (WLC.TO) which I have commented on for many years as the potential domestic supplier to the USA of lithium molecules. 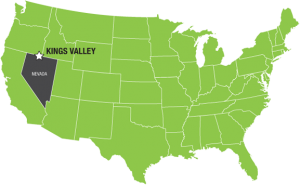 The Wall St. Journal said a source believes that Tesla may choose Reno, Nevada to build a $5 billion battery plant producing half a million electric cars annually.  Japanese partners may also be considered.

According to the Wall St. Journal, a source familiar with the discussions  says Tesla is considering Reno which is also home for Western Lithium.  The article states…"Reno is home to a startup lithium mining-and-production operation owned by Western Lithium USA Corp. The miner is developing a pilot plant to create lithium carbonate, a key ingredient in making lithium-ion batteries."

Western Lithium's Kings Valley asset in NW Nevada could be a major lithium supplier for Tesla's battery factory.  Demand for these batteries is expected to double in the next five years. 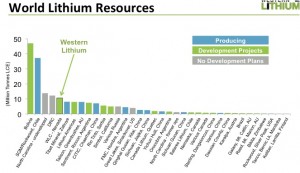 For years I believed Western Lithium's assets could play a critical role in battery technological innovations.  Fortunately for new investors, the lithium sector may just be beginning its breakout move and be recognized as a critical clean energy material.

In addition to lithium, Western Lithium can produce hectorite clay used in deep directional drilling for oil and gas in shale and deep waters.  Demand for this sort of drilling for unconventional oil and targets are rising.

Western Lithium is currently constructing a clay facility production plant that should be commissioned this summer and provide cash flow to develop their lithium assets.  Western Lithium currently has around $8 million of cash, no corporate debt and is 25% owned by Orion Mine Finance and management. 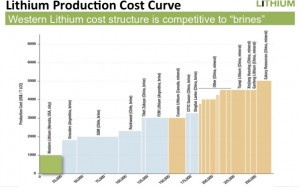 The Kings Valley Asset is 100% owned by Western Lithium and the company is continuing to prove that it can be competitive with the current producers.  This world class lithium asset is located in the mining friendly, supportive and stable jurisdiction of Nevada.

It could be one of the major suppliers to battery factories such as the $5 billion plant Tesla is building.  Recently, Western Lithium received a $1.5 million payment from its largest shareholder towards building a Lithium Demonstration Plant in Germany expected to be operational by the end of 2014.

The company received a USA patent for its process which separates lithium and potassium from clays.  Western Lithium has a prefeasibility study which forecasts lower costs against current and potential producers.

Western Lithium recently announced that the BLM has approved the Final Environmental Assessment.  This means Western Lithium can operate the Hectorite clay Mine.  Western Lithium CEO Jay Chmelauskas stated in the recent PR that, “We are beginning clay mining operations in 2014 to support our strategy of initially selling Hectatone™ organoclay products in the near term to the growing oilfield industry...Ultimately, we plan to increase our activities at Kings Valley and extract lithium from our hectorite clay in the future, in order to become a strategic USA based lithium supplier for new battery manufacturing that is anticipated due to increased lithium demand expected from electrified vehicles and grid storage." 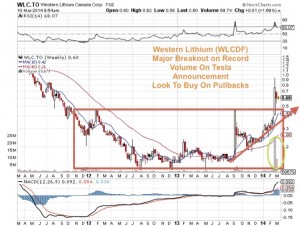 With renewed interest in electric vehicles and lithium ion batteries, Western Lithium could continue its upward breakout on record volume.  Look for a breakout into new highs for Western Lithium as renewed interest comes into this high growth sector.  This year may be a major year with the Lithium demonstration plant operational by year end and the Organoclay Plant producing hectorite by the summer.  Stay tuned to my premium service as I plan to release an interview with the CEO shortly.

Disclosure: I am long  WLCDF and WLC is a sponsor.