Is Trump Sparking a Revival in US Lithium Sector?

It just may be that in the next twenty years the internal combustion engine will become obsolete.  Countries and car makers around the world are planning to possibly ban fossil fuels over the coming decades.

More electric vehicles were sold in 2017 than any prior year.  Demand keeps soaring which puts electric vehicle battery makers under pressure to secure long term supplies of lithium, used in the battery.

For many years I predicted that the lithium stocks would lead the market and end the bear market in junior miners as gains could be outsized.  In fact, that came to fruition as the past three years have seen a huge move in junior lithium companies especially the producers and advanced developers.

However, many investors are ignoring the recent move in the nation's capital by President Trump to reduce our reliance on imported lithium which more than half comes from South America.  A US domestic lithium supply is becoming a top interest for lawmakers and energy companies.  I believe we should continue to witness increasing agreements between end user battery makes and junior lithium companies especially in the USA.  Notice the chart below the US is nowhere to be found for lithium production despite having significant resources.  That could change under Trump as we may see a revival in US lithium production. The TSX Venture appears to be on the verge of another leg higher and I believe some of our lithium players may take a leadership role in the USA such as Standard Lithium $SLL.V $STLHF which is run by Robert Mintak one of the only CEO's who signed a deal with Tesla when he ran Pure Energy into the number one company on the Venture.

He has learned a lot since then and is now focused on Standard which may be advancing lithium tactfully.  Robert has been looking at lithium brine projects that can get into production rapidly and partnered with active chemical producers such as National Chloride in California.  These existing operations could reduce permitting timelines and cut costs as there is already infrastructure in place.  A lithium resource is expected in the first half of this year from this California property.

Even more exciting is the news that was announced today where they signed a deal with Tetra Tech to acquire the lithium rights to 33k acres of brines in the Smackover Formation in Arkansas.

Standard Lithium’s Chief Executive Officer, Mr. Robert Mintak commented, “In our search for opportunities of significance, this is one that could really move the needle.  We believe the Smackover may be one of the lithium industry’s most promising regions to develop, given the potential resource size and large-scale brine-handling infrastructure in the region.  This agreement highlights our excellent working relationship with TETRA, and signing this deal allows Standard Lithium access to the last available large lease package in the key brine production zone of the Smackover.”

President and Chief Operating Officer, Dr. Andy Robinson also commented, “the Company chose the Smackover Formation as a key development target, precisely because it combines a very large resource potential, with well-studied and documented geology and hydrogeology, along with a permitting regime that has a long history of approving operations that remove, process and re-inject massive volumes of brine.  Combined with a wealth of existing infrastructure in the project area (power, rail, gas, water, trained workforce, cheap reagents etc.), this makes Standard’s new opportunity in Southern Arkansas the perfect location to locate a modern lithium brine processing operation.  Due to the wealth of already-available data from our new project area, we can start the process of compiling a maiden resource estimate for this large lease package extremely quickly, with a minimum of additional intrusive investigation.”

Standard Lithium appears to be finally breaking out after consolidating for 8 weeks as the company announces this deal in the Smackover with Tetra Tech.  I first highlighted this company in the summer before it made its first move higher from $1 to reach a high at $2.80. 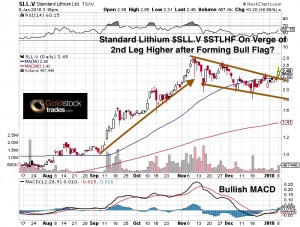 Since then it has made a healthy consolidation for 8 weeks around the 50 Day Moving Average.  It may be on the verge of a second leg higher if investors catch on to what management believes is one of the most exciting lithium brine opportunities in the United States and possibly the world.

Get more information on Standard Lithium by visiting their website at http://standardlithium.com and contacting them at

In addition to Standard Lithium, make sure to watch the recent interview with Dajin Resources $DJI.V $DJIFF COO Cathie Hickson in London where she states that Teels Marsh in Nevada and Salinas Grandes in Argentina has the potential to be “one of the best lithium resources” around. Dajin $DJI.V $DJIFF appears to be on the verge of another breakout as investors have waited a long time for them to finally start drilling and getting results.  It should be an exciting first half for both Dajin and Standard.

Finally, reports in the media state Elon Musk is in Chile looking at potential suppliers after the recent election.  I expect Bearing's $BRZ.V $BRGRF extremely high grade advanced lithium brine in the Maricunga to be high on that list.

Disclosure: I own securities in these companies.  They are website sponsors which means I have a conflict of interest and am biased as I would benefit if the share prices goes up in value. Please do your own due diligence as I am not a financial advisor. This contains forward looking statements which may not come to fruition as mining is risky and investors can lose all their money. I may buy or sell shares at any time without notice. This is based on public information and management conversations but there may be inaccuracies or errors so make sure you do your own due diligence. This should be considered an advertisement and not financial advice.