Lithium Continued To Excite Investors in 2015, Will Stock Market Crash Bring Back Interest to Junior Mining? 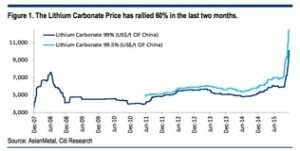 Over the past year I have studied the content of my blog and would like to report which are my top articles and videos in terms of unique page views in 2015.

Clearly, my top content in terms of interest from readers in 2015 was the lithium sector where we are continuing to see demand outstrip supply.  It was one of the only commodities rising in price while the sector was wiped out by a strong dollar.  The August correction in the stock market brought back retail interest over the summer.  I expect as tax loss selling ends today to begin to see a rally in the new year.  This rally is called the January Effect where beaten down sectors bounce as fund managers look to re-position in the new year.

1)My article from June entitled, "Where Is Tesla Going To Get The Lithium and Graphite for The “Gigafactory”? got the highest amount of pageviews in 2015. In the article I poised the question, "So where does the real opportunity lie?  The real question is where will the raw material needed for these Tesla batteries come from?" I highlighted Western Lithium (WLC.TO or WLCDF) in that article and eventually featured two new lithium stocks Pure Energy (PE.V) and Dajin (DJI.V) over the summer of 2015 which made great progress.

2)The earlier March 2015 article entitled, "Battery Market Is Powering Up Demand For This Lithium Asset In Nevada" received the second highest amount of views.  In the article I wrote, "The Wall St. Journal said a source believes that Tesla may choose Reno, Nevada to build a $5 billion battery plant producing half a million electric cars annually.  Japanese partners may also be considered."

3)In April I wrote an article entitled, "Six Junior Gold Miners Ready To Outperform".   I highlighted a few gold companies that I believed were on the verge of bottoming.  As we are well aware gold continued to languish and disappoint for most of 2015, however  these situations should continued to be watched in 2016.

4) In August we had a correction in the stock market which brought some attention back to the junior gold miners (GDXJ) as The Fed pushed off raising interest rates.  I wrote an article entitled, "Post Stock Market Crash, Will Investors Look To Junior Gold Miners as a Hedge?"  In the article I wrote, "The areas that may provide the greatest protection are the ones that have already been beaten down and trading near liquidation values.  The mining and metals sector may be one of the most undervalued sectors of all time and may see limited downside.  Unlimited debt can only boost an economy for so long.  Eventually, these bubbles burst as we may be currently witnessing as the Dow showed its biggest one day decline ever."

5)In early 2015 I wrote an article entitled, "Junior Gold Miners Breaking Out Higher Despite Gold Correction" and highlighted Integra Gold (ICG.V or ICGQF) which was one of the better performing gold stocks in 2015 as they eventually received a major investment from NYSE Producer Eldorado Gold (EGO).

4)Red Eagle (RD.V or RDEMF): One of the Highest Economic Undeveloped Gold Mines in The World

6)Western Lithium (WLC.TO or WLCDF) Could Be Major U.S. Supplier of Lithium

7)Carlisle Gold (CGJ.TO or CGJCF) Owns One Of the Highest Grade-Open Pit Gold Mines in Canada

During this past month of December I would like to highlight a few video interviews that have some of the highest traffic with my readers which I believe happens to be some of the smartest mining investors in the business.

Disclosure: I own shares, warrants and/or options.  All these companies were prior and/or current website sponsors. Please be aware that mineral exploration is very risky.  Make sure to read the risk factors on public filings.  Do your own due diligence as I have a conflict of interest as I would benefit if share price goes higher.  This is not investment advice.