Current convulsions in the global markets is coming as no surprise to my readers.  I was greatly concerned of the overvaluations in the US equity markets (SPY) despite warning signs from the commodity prices that have hit record lows indicating not all is well with the world economy.  Gains in US equities (DIA) have been focused on only a handful of momentum growth stocks.  A lot of these momentum hedge funds get stopped out on any decline.  They may need to look for areas to protect profits from the past five year bull market.  The downside could be significant as there have not been any meaningful corrections in many years.  I would not be surprised of another 20-40% on the downside for the overvalued large caps. 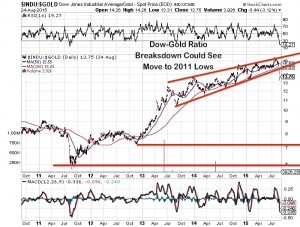 Despite equity markets hitting new highs many of the sectors were already in decline.  This historic crash over the past week has been fueled by one of the most overbought markets that I can remember since the dot com bust.  After the dot com bust investors sought out value in the deeply discounted commodity sector and junior miners (GDXJ).  I expect history may not repeat but it should mimic.  After the dot com bust, junior mining was the place to be.

As the junior miners bottom I expect the upward volatility to be at least equal and opposite to the recent five year decline originating with the deleveraging of the credit crisis.  Stocks have been outperforming commodities over the past five years reaching divergences not seen since the dot com bubble.  Something was bound to turn and it may have been China's entry into massive currency devaluation, which will handcuff the Fed from raising interest rates. 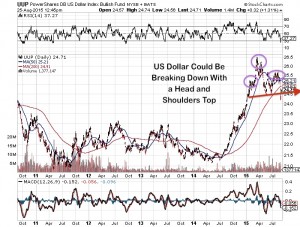 The US dollar (UUP) looks like it has broken down from a head and shoulders top.  Investors may begin factoring in QE4 the exact opposite of interest rate increases to protect from a massive deleveraging.  The sectors hardest hit will be the ones most overvalued with high PE's, debt and no earning.

The areas that may provide the greatest protection are the ones that have already been beaten down and trading near liquidation values.  The mining and metals sector may be one of the most undervalued sectors of all time and may see limited downside.  Unlimited debt can only boost an economy for so long.  Eventually, these bubbles burst as we may be currently witnessing as the Dow showed its biggest one day decline ever.

Don't be surprised to see some attempts to revive this market, however such volatility as we have witnessed usually takes a long time to digest.   For years now it looks as Central Banks solved the world's problems, now we may see the reality that it was propped up by easy money.  These current currency wars could be followed by trade and commodity conflicts where governments look to take control of strategic assets.  Global markets are being rocked by currency devaluations which could lead to soaring interest rates and a US bond market (TLT) crash.

Capital preservation is critical in times like this and once again we look for the ultimate safe havens in metals and mining trading at record discount valuations.  Real assets backed by wealth in the earth may be the place to be as overbought markets fueled by easy money go bust.  Learn from the history of civilization where gold has always maintained its value as currencies crumble.  Be careful of gold backed etf's such as GLD and SLV.  I believe in looking for the best junior mining assets controlled in safe jurisdictions by reliable management teams.  This is the area where we can once again see ten fold gains.

Here are some of my current holdings who are also featured companies which I believe are leading the pack.

We may be entering a time period which once again favors gold and silver junior miners over large cap stocks.  These links above may be a good starting point to listen to these stories and begin further due diligence.

Disclosure: I own all these stocks and they are all website sponsors.  Please do your own due diligence.