The Junior Gold Miners (GDXJ) are once again taking center stage as the go to place to be in 2016.  As I write this the Dow is down close to 400 points again on high volume and the Nasdaq Tech bubble appears to have burst as capital is fleeing equities in search of safe havens in precious metals especially the GDXJ which is seeing a huge influx of capital.  The Junior gold Miners ETF $GDXJ is breaking above the critical 200 day moving average and a 9 month downtrend. 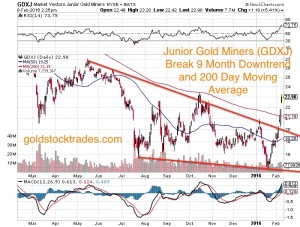 The VIX is soaring.  This is exactly the situation I have been warning my readers for months.

I wrote an article back in December entitled, "Post Stock Market Crash, Will Investors Look To Junior Gold Miners as a Hedge?"

In the article I stated, "As the junior miners bottom I expect the upward volatility to be at least equal and opposite to the recent five year decline originating with the deleveraging of the credit crisis.  Stocks have been outperforming commodities over the past five years reaching divergences not seen since the dot com bubble.  Something was bound to turn and it may have been China’s entry into massive currency devaluation, which will handcuff the Fed from raising interest rates."

Now six months later the major equities are breaking support while gold which was sold off into year end 2015 begins a massive rebound above the 200 Day Moving Average Line.  It appears year end 2015 was extreme negative capitulation as even many gold bugs went short.

Now we could be in the early stages of a massive bull market in junior equities off of a historic low breaking above the 200 day moving average.  Meanwhile the US dollar has failed to break through early 2015 highs and is heading lower breaking below the 200 day moving average.  Declining equities combines with a falling dollar is super bullish for precious metals and commodities.

Huge amounts of institutional capital may be flowing into the major gold miners such as Barrick, Newmont, Kinross and Agnico Eagle which have all seen big moves off of December lows.  There is an increasing probability that we saw the bottom at the end of 2015.  Major investments have taken place recently in the junior sector specifically in uranium (URA), Gold (GLD) and Lithium (LIT).  Fission (FCUUF), Gold Standard Ventures (GSV), Orocobre (ORL) and Oban (OBM) have all recently raised large amounts of capital.  This could be just the beginning as other high quality situations may find the critical cash needed to advance mineral projects.

Attention should be paid to this low capex and high grade gold mine in Ontario which I believe could be one of the best takeout targets in 2016.  Huge M&A Activity should be expected in Canada in 2016 as the market in gold mining turns.  Remember Probe Mines was bought out by Goldcorp (GG), Carlisle Gold (CGJ.TO) was acquired by NYSE Producer Alamos Gold (AGI) and Integra Gold (ICG.V) saw a major investment from NYSE Producer Eldorado Gold (EGO). These were three of our favorites.  In addition, New Gold (NGD), Goldcorp (GG) and Kirkland Lake (KGI) have all made recent acquisitions in Ontario for nice premiums.

One of the top undeveloped projects in Ontario with the highest grades and the lowest capital and operating costs may be this 35 million market cap junior gold miner at the advanced permitting and engineering stage.  This company is a large shareholding of mine and a website sponsor so I would benefit if the share price rises in value.

I recently discussed the breakout in precious metals and how to pick the winning junior miners with Palisade Radio's Collin Kettell.

Talking points from this interview: