The 2 Junior Gold Miners Breaking Out Higher Despite Gold Correction

Only two weeks ago I published two reports on two junior gold miners on the verge of huge breakouts and bullish reversals.  Despite the gold price consolidating over the past few weeks after a breathtaking January, these two miners are making great breakouts on huge volume on major fundamental and technical advancements.

I expect gold to continue to find support as it retraces its January jump around the 50 DMA and 50% retracement of the move around $1230-$1220 before making its next leg higher where we could see a jump to the $1400 level.

Meanwhile, as gold finds support, Pershing Gold (PGLC) a company which I highlighted in late January right here, is making a huge breakout on record volume as it releases another round of some of the highest grade results being hit in Nevada.

Pershing's Relief Canyon Processing Facility and Mine is becoming one of the hottest gold development projects in Nevada.  Now with these high grade drill results of 76.8 and 87.9 gpt, investors are no longer assuming this is a low grade 1 gpt mine like it was in the 1980's.

Pershing is being rerated as they plan to announce an updated resource which includes the higher grade 2014-15 drilling.  After the new resource is published, Pershing will pursue an independent Preliminary Economic Assessment to be published on the Relief Canyon Project. 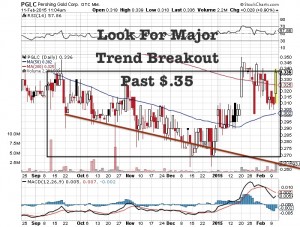 Pershing (PGLC) appears to be making a major trend change as it finds support at the 200 day moving average on huge buying accumulation.  Pershing is trading record volume on the news, which can be found by clicking here.  It could make another breakout at $.35 which would be new six month highs.

Another junior gold miner I wrote about in late January just announced an updated resource which showed a major increase of the resource into the indicated category.  Integra Gold (ICG.V or ICGQF) owns 100% of the Lamaque South Gold Project in Val-d'Or, Quebec and is currently drilling 50k meters with six diamond drills.

It may be one of the most active juniors in the entire sector.  Integra is making a bullish golden crossover of the 50 and 200 day moving average and could hit new six month highs past $.30 as investors see the significant increase in resource at the highest grade target.

Integra is a unique junior as they own 100% of a project which has a low cap-ex and high grade returns.  Management has experience operating gold mines in Val D'or and advancing this project into production.

It appears that the technical team has shown wider zones at depth in the Triangle Zone increasing the overall grade and size of the resource.  What is significant about this is that historically the most productive and profitable ore in the neighboring mines were in the lower zones.

This year Integra will be extending a number of holes at depths below 900m with up to eight core rigs drilling.  I believe the majors are beginning to recognize the growth potential of this high grade gold project in mining friendly Quebex. 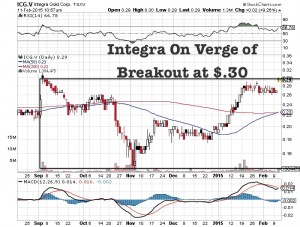 Integra is making a bullish golden crossover of the 50 and 200 day and may be on the verge of breaking six month highs made in September of 2014.
See Integra's full news release on the resource update by clicking here...

Disclosure: I own Integra and Pershing and they are both website sponsors.  Be aware of any conflict of interest as I would benefit if the share price increases.  I am not a financial advisor.  Please do you own due diligence.