Gold and silver are possibly just starting the next leg of a move higher that may eventually move into record high territory.  It is my opinion that $1900 gold and $50 silver will eventually be broken over the next 12-18 months as other markets such as equites, real estate, fiat currencies and treasuries deflate in value.  The junior miners could move to the upside with greater leverage than bullion from these discounted levels as the majors search for replaceable reserves in the form of acquisitions.

Open your eyes to the recent takeovers and large premiums paid in Mexico, Ontario and Quebec of Osisko, Probe, Rainy River, Cayden and Paramount by producers such as Yamana, Agnico Eagle, Coeur, Goldcorp and New Gold.  This may be just the beginning of large premiums paid for quality gold mining assets in stable mining jurisdictions.  (I forecasted Paramount and Probe as takeout targets in this interview from December of 2013) 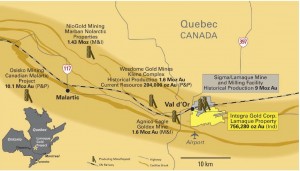 Watch Integra Gold who will be very active in 2015.  In late 2014, I highlighted Integra Gold at lows due to tax loss selling and margin calls.  I stated it was my next favorite takeout target in Quebec.

Integra Gold’s (ICG.V or ICGQF) Lamaque South Gold Project and Milling Complex is located east of Val d’Or, Quebec along the Abitibi Greenstone Belt where one can find the top gold mining majors with some of the most stable and profitable mines in the world.  Integra has possibly one of the highest grade and most advanced projects in this highly desirable area.  I believe its a takeout target for a major like Yamana, Agnico Eagle or Goldcorp all of whom are active in the area.

Keep a close eye on Intergra Gold (ICG.V or ICGQF) which appears to be breaking out of a 10 month consolidation.  I expect that Integra will breakout and challenge old highs at $.40 sooner rather than later.

They just announced an impressive PEA on its Lamaque Project next to Val D’Or, Quebec with a base case pre tax IRR of 77%.  The production timeline and capital requirements were reduced thanks to the recent mill acquisition.  I believe it may be one of the most advanced and economic assets in Quebec still in control of a junior. 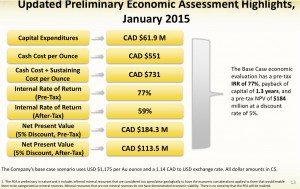 Integra also released news about their 2015 drill program which will include 50k meters of drilling.  Up to seven drill rigs will be running during the January to April timeframe which will be Integra's most aggressive exploration campaign targeting anomalies that have never been tested.

See the full news release on the 2015 drill program by clicking on the following link:

See my latest interview with CEO Steve de Jong by clicking on the following link:

Disclosure: Jeb Handwerger is a shareholder of Integra Gold and the company is a sponsor of his website.  Be aware of any conflict of interests as he would benefit if Integra moves higher in value.  Please do your own due diligence by reviewing all filings.