The junior gold miners appear to be bottoming and outperforming in January as I expected.  Watch $29.50 to be cleared for a new three month high.  This could end the lower high pattern or downtrend.  Already for weeks I highlighted the positive momentum in the junior gold miners despite the new low in December.  This divergence usually signals an interim bottom and turning point.

Despite oil and copper collapsing along with equities, precious metals and mining stocks appear to be bottoming.  Right now, gold as a safe haven may be where the action is greatest.  The US dollar may peak as investors realize that the US economy is still far from recovered.  The oil and copper collapse is giving a loud shout to investors that the global economy is nowhere near recovery and looks more like the 2008 Financial Armageddon.  One of the few things that can maintain its purchasing power in this sort of market is gold.

Smart investors should be defensive with inverse S&P500 etf's such as Proshares Short S&P 500 (SH) or a short financial fund (SEF) and go long gold (GLD) and junior gold miners (GDXJ) in this sort of chaotic environment.  The banks are sitting on major energy losses, while the S&P500 is made up of energy stocks and companies who profit off of emerging economies.  It is way overbought and we could witness a powerful crash in equities that mirror the oil crash. 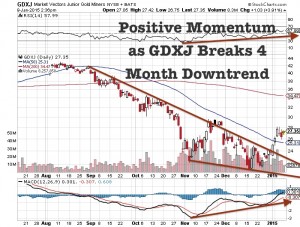 I believe mining assets with real potential could come back into favor.  I am accumulating hoping that within the next decade we could see a major run higher in this sector.  Eventually, the trillions of debt will be paid back with devalued US dollars.    Rising interest rates and inflation could pick up in 2015 especially in the US benefitting our beaten down wealth in the earth sector.

Real gold mining assets in stable jurisdictions will go up in value.  I especially like the junior gold miners especially the explorers now.  Governments can print another trillion dollars by pressing a button at the printing press.  This can’t be done in the gold exploration business.  It takes years and a lot of divine blessing to find a million ounces of gold.   Investors may now be able to believe this as the junior gold mining sector has started 2015 on a positive note closing above the 50 day moving average for the first time in four or five months. 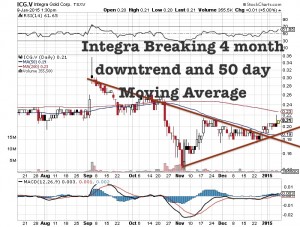 Keep a close eye on Integra Gold’s (ICG.V or ICGQF) Lamaque South Gold Project and Milling Complex located east of Val d’Or, Quebec.  Along the Abitibi Greenstone Belt one can find the top gold mining majors with some of the most stable and profitable mines in the world.  Integra has possibly one of the highest grade and most advanced projects in this highly desirable area.  I believe its a takeout target for a major like Yamana, Agnico Eagle or Goldcorp who recently tried bidding for fellow Abitibi miner Osisko.

Integra recently released news from a drill program at their Fortune and Plug Zone. "The drill results announced at the Fortune Zone continue to improve our confidence in the Company's geological model, while the drill results from the exploration program at No. 5 Plug demonstrate the ability for Integra to further grow the resource base and continue to discover new deposits on the property," noted Integra Gold President and CEO Stephen de Jong. "The No. 5 Plug in particular is within a few hundred meters of the proposed underground infrastructure for the Parallel zone in our existing mine plan meaning any potential resources we are able to define should be relatively simple to access."

See my latest interview with CEO Steve de Jong by clicking on the following link: 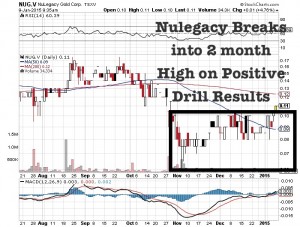 In addition to Integra, our little Nulegacy Gold(NUG.V or NULGF) is partnering with the behemoth Barrick on the extension of Goldrush in the Cortez Trend.  Little Nulegacy is run by one of the most experienced explorers in the business Dr. Steininger who discovered the first major discovery on the Cortez Trend back in 1989 with Royal Gold.  Nulegacy just reported the remaining four core holes of the seven drilled during the fall 2014 exploration program.  An additional four RC holes are still being processed.  "Most of the core holes contain significant intervals of greater than 1.0 gram of gold/tonne", comments Dr. Roger Steininger NuLegacy's COO, "with individual samples as high as 9.74 grams of gold/tonne indicating that the Iceberg deposit contains higher gold grades yet to be drilled. Based on the assay result comparisons from the seven core holes drilled, we conclude that the overall grade of the Iceberg gold deposit's 90 to 110 million tonnes exploration target, which was originally reported (Sept 5, 2013) as 0.7 to 1.0 gram of gold/tonne based entirely on reverse circulation holes, is likely better than 0.9 to 1.1 grams of gold/tonnei ."  See the full news release by clicking on the following link: http://nulegacygold.com/s/News.asp?ReportID=690207&_Type=News&_Title=NuLegacy-Reports-Remaining-Core-Hole-Assays

See my recent interview with Nulegacy CEO James Anderson by clicking on the following link: 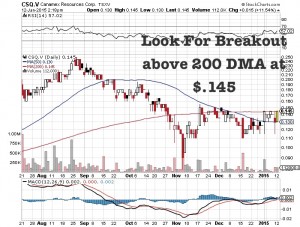 You can be sure that smart junior gold mining investors are looking to pick up Canamex (CSQ.V or CNMXF) at a discount to the recent private placement price at $.21 which mostly was bought by Hecla and Insiders.  I am getting excited as I believe Canamex can break through the 200 day moving average to the upside shortly at $.145 before moving to new highs.  It deserves to be rerated higher when the resource is published as it has produced some of the best results in Nevada over the past couple of years.  Four and five gram material over large intercepts near surface has gotten some NYSE producers such as Gold Resource Corp and Hecla excited.  This could be valued similar to some of its peers with an updated 43-101 resource.  Currently, it is trading at about a quarter of the value of its peers because it doesn't yet have a 43-101 maiden resource yet.  That should change over the next few months as Canamex publishes a maiden resource.  The stock could be rerated a t that point with possibly a double or triple.  I consider the stock a buy below the recent placement price at $.21 which Hecla and Insiders took down.  Some smart major may be waiting for that report to make a offer.

Canamex (CSQ.V or CNMXF) recently provided shareholders with a review of the Company’s accomplishments, progress in 2014 and its corporate plans for 2015.  See the full news release by clicking on the following link:

See my recent interview with new Canamex CEO Mark Billings by clicking on the following link:

Disclosure: I own all three companies and Integra and Canamex are current website sponsors.