Why Trump Will Be Good For Precious Metals and Junior Miners

Gold and silver could once again be ready to rally possibly starting in days or in the beginning of 2017.  Investors have been selling  precious metals in fear of rising rates and choosing to chase after gains in the stock market or hold a rising US dollar.  This strong US dollar in relation to other collapsing currencies has made it very difficult for miners and explorers over the past few years. The dollar is hitting a 15 year high making it very hard and expensive for our mining and manufacturing sector.  That could change quickly under Trump as he has already committed to taking on other nations who have been devaluing their currencies to gain a competitive edge with trade. 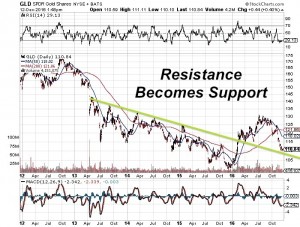 The junior mining sector has been in a bear market due to this rising dollar and QE Taper since 2011 while other nations have been devaluing their currencies.  The bear market in precious metals and junior miners appeared to end in the beginning of 2016 but was smacked down as the rise of Trump in the US  has even pushed stocks and the US dollar even higher.  Meanwhile precious metals and the miners remain dirt cheap testing major support.

The precious metals are very oversold and ripe for a reversal.  I believe Trump will support inflation and infrastructure and should run into even further deficits.  I believe the Euro is slowly disintegrating.  China, India and Russia are crashing their currencies to support their economy through exports.  The Middle East Sunni Shiite War is worse than ever.  All this uncertainty leads me to want to hold gold and silver not fiat currencies.

The QE taper and fear of rising rates has caused gold to correct in US dollar terms meanwhile its soaring in terms of Yen, Euro and Yuan.  However many are concerned Central Banks worldwide are secretly suppressing gold and silver prices manipulating prices lower.  Remember it suits the Central Banks to keep the price low as they are some of the largest buyers during this pullback.  They don't want the average Joe to pull their cash burning a hole in their pocket in favor of gold and silver coins.

The victory of Trump for US President caused a huge selloff in precious metals and miners as investors focused on the banks as interest rates soared.  There was a huge risk on rally as investors bought stocks and dumped bonds and precious metals.  However, that first reaction may be a knee-jerk one and cause a blow off move in stocks and the dollar.  Precious metals and mining may even grow greater in favor under President Trump.  Trump wants inflation and supports mining and manufacturing which has been almost destroyed over the past eight years by regulations.

I like this new gold producer in Papua New Guinea. The management team includes some of the top mine builders and financiers in the metals business who are well known for building value for shareholders.

They bought a great project from Barrick Gold at what could be the bottom of the market. It is an exceptionally high grade resource at over 10 g/t where over $40 million was put into exploration drilling by prior operators. Barrick put millions of dollars into this project which includes underground mine development, housing, a tailings pond, paved access roads...etc.

This new gold producer is fast tracking production to reach around 50k ounces annually. These profits can then be used to fund discovery of neighboring ore bodies on the huge property.   The company just announced high grade results from the first exploration holes drilled at a nearby target along with copper and silver.  This is when things could really get exciting as they prove to the market the high grade upside potential.

It also could be time to buy some cheap high grade silver miners especially in the Yukon.  Between 1921 and 1988, the Keno Hill Silver District in the Yukon was a world-class silver producer, with more than 217 million ounces of silver produced at average grades of 44 oz/t silver, 6.7% lead and 4% zinc. These historical production grades would rank Keno Hill in the top 3% by grade of today's global silver producers.

This silver producer is exploring in Keno Hill and just made a new high grade discovery within 1 km of a historic 90 million ounce silver mine. I believe silver could continue outperforming gold to the upside and this Canadian silver district which is much higher grade could get a premium as it does not present as much political uncertainty as Mexico or Bolivia.

Keno Hill has been mined for many years so there is existing infrastructure such as power and highway.  Another new silver explorer in Keno Hill believe there are more discoveries to be made and has become the second largest land owner in the district.  They have four historic producing mines with some of the highest grade historic production in the district.  They have a first class exploration team taking historical information and using modern techniques to develop drill targets to hopefully make another new high grade and large silver discovery in the district.

Disclosure: I own shares in linked companies. Owning securities and receiving compensation is a conflict of interest as I could personally benefit from a price/volume increase. Please do your own due diligence as this is not financial advice!

See my full disclosure and current list of featured companies by clicking on the following link:

Investing in junior mining stocks and precious metals is very risky and could result in losing money. Buyer
Beware!

Section 17(b) provides that:

“It shall be unlawful for any person, by the use of any means or instruments of transportation or communication in interstate commerce or by the use of the mails, to publish, give publicity to, or circulate any notice, circular, advertisement, newspaper, article, letter, investment service, or communication, which, though not purporting to offer a security for sale, describes such security for a consideration received or to be received, directly or indirectly, from an issuer, underwriter, or dealer, without fully disclosing the receipt, whether past or prospective, of such consideration and the amount thereof.”

I am biased towards my sponsors (Featured Companies) and get paid in either cash or securities for an advertising sponsorship.
I own shares in all sponsored companies.