Why The Smartest and Richest Minds Are Buying Mines

Gold may look to base at 2012 lows at $1550.  Whenever gold has moved below the 200 day moving average it has proved to be a buying opportunity in this 12 year uptrend, which I believe is firmly intact due to the underlying fundamentals.  Record sovereign debt, negative real rates and continued currency wars could all be catalysts for the next price spike.

Remember billionaire traders such as Soros always seem to cut their stakes when gold hits a bottom and tends to buy when it is overbought.  I would use these bearish media articles as a contrary signal.  Remember the filings are for the previous quarter and is like looking in a rear view mirror.  Many times a few weeks later one sees these same traders come right back into the market and buy. 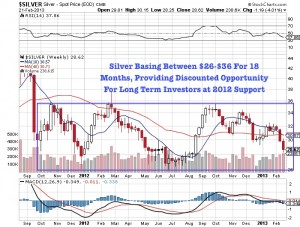 Some investors are concerned about the death cross in gold where the 50 day crosses below the 200 day moving average.  We have witnessed in the past that these death crosses often turn into golden crosses after all the weak hands are shaken out.

This recent decline was exacerbated by fund redemptions and margin calls.  However, I also observe large hedge funds making bullish bets on the juniors such as SAC Capital.  SAC Capital with over $20 billion under  Stephen Cohen's management placed a $240 million dollar bet on the miners.

In addition, John Paulson, hedge fund manager and one of the smartest minds in the business continues to be bullish on the undervalued gold miners and especially one of our long term GST recommendations.  Do not forget the world's richest man, Carlos Slim made a $750 million bet to buy a Mexican gold miner.  Similar to Paulson and Slim, I also believe we are headed into a period of gut-wrenching inflation where the U.S. dollar could move into new lows and gold could continue soaring into new highs.  Investors must position themselves ahead of the herd as once the masses catch on to a potential hyper-inflation, the rally can move parabolically to the upside.

As I have written for several weeks, gold is basing at the $1550 area along its 2 year low.  We are moving closer to the pinnacle of the rectangle base which means that there could be a breakout possibly before the 2nd Quarter of 2013. 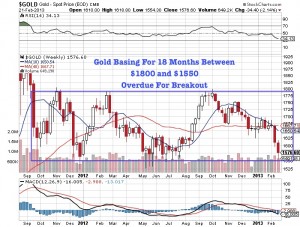 Gold hit a major oversold position at the end of December and is due for a rally past the breakout point at $1800.  A technical target of $2250 is possibly in reach to be hit in the second half of this year.  Gold is building a powerful 18 month base indicating a healthy minimal correction of less than 20%.  Healthy corrections could be anywhere from 20-30%.

Despite this powerful base gold is building and the minimal correction, many investors have been shaken out and impatient seeking out greener pastures in the toxic housing and financial sector, which is being manipulated by the Banks.

I have always advised patience and may have investment horizons longer than the average investor.  I follow the long term cycles and trends, which still indicates by both technical and fundamental analysis that precious metals and wealth in the earth are in a secular bull market.

All these quantitative easing moves around the world to boost housing and financials could have major long term consequences on our banking and foreign exchange system.  Precious metals will continue to climb as the expansion of the monetary base continues to reach record levels.

Short term, the real estate and banking sectors may get a boost and inflation may be tempered.  Historically, capital will flow to quality hedges against inflation which is precious metals, commodities and the undervalued miners.

These undervalued sectors have been forming long multi-year bases and may be on the verge of a potential breakout.  Attempts at boosting toxic sectors while keeping the lid on inflation may be working temporarily.  However, the general equity markets are reaching record heights while our sectors are testing multi-year lows.  This is a record divergence from the historical mean.  Whenever divergences occur be prepared for a move back to the long term average.  This means the miners could outpace equities.

Do not follow the herd and become impatient.  As the miners test 2012 lows look at cheap value quality situations and be ready for a rebound. 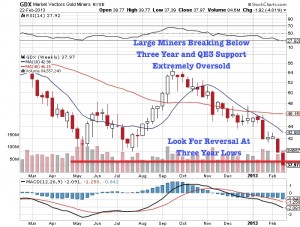 The Gold Bugs Index which tracks the largest miners has broken into new three year lows and is at a record oversold position.  I expect the miners to possibly bounce off of these levels leaving no more sellers.  Observe the positive momentum even though the price is breaking 2012 lows.  This may indicate a bullish reversal in the near term.

Despite the soaring Dow which is breaking 14k, demand for gold bullion is soaring in China and hitting record levels.  Many are expecting China to overtake India as the largest consumer of gold.  Short term investors are being shaken out of the precious metals space chasing overbought equities, while the long term investors, Central Banks and billionaires continue to accumulate.

Recently billionaire John Paulson recommended to Anglogold Ashanti to split into two companies.  Anglogold takes his recommendation seriously as he is one of the largest shareholders of the gold mining giant with a 7.4% stake.

One company would be focused on South African production which is under pressure from rising labor tensions and the threat of nationalization.  The other company would be focussed on exploration growth in other potentially more mining friendly jurisdictions.    Anglogold is suffering with labor disputes at its South African mines and dealing with major geopolitical risk in Mali.  Paulson may have a shrewd strategy to divest from Africa and look to grow in more stable jurisdictions.

Anglogold should take a closer look to increase their position in International Tower Hill Mines (THM or ITH.TO) which stands out as a truly world class gold deposit with over 20 million ounces of gold.  Between Paulson and Anglogold they own over 20% of International Tower Hill Mines.  In addition, the respected Tocqueville Gold Fund managed by famous fund manager John Hathaway owns over 17%.  Tower Hill shareholders are positioned alongside the smartest investors in the precious metals industry. 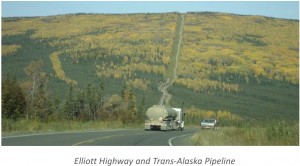 What do these investment giants find so compelling in Tower Hill Mines?  This company controls one of the largest undeveloped gold resources in the entire world and should provide great leverage to a rising gold bullion price. 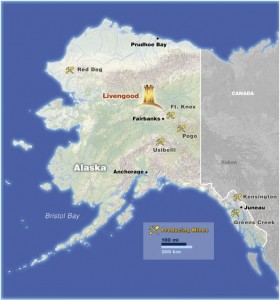 Tower Hill feels that there is still potential exploration upside and that their Livengood Project could be one of the largest producing gold mines in North America.  The project is located about 70 miles northwest of Fairbanks, Alaska, one of the most favorable jurisdictions in the entire world.

This area of Alaska has a history of mining and the land use has been designated for mining.  There are other mines in the district including Kinross's world class Fort Knox Mine which has been a success. This means that there is an available highly skilled labor force nearby.

International Tower Hill Mines controls 100% of a world class gold deposit located in an exceptional mining district.  The company is working on the bankable feasibility study (BFS) due mid year 2013.  This may be a true value driver as it will provide third party verification of the economic viability of the project. 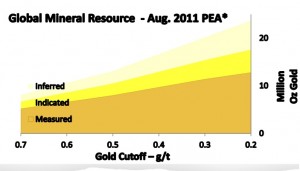 This BFS may attract majors who are looking to invest in geopolitically safe mining jurisdictions with reasonable economics with the potential to produce at least 500k ounces of gold annually.  The rising threats of resource nationalism and labor violence is making the big miners reconsider prior risky moves and look for growth only in stable areas.  Tower Hill Mines is studying different scenarios to increase cash flow and the internal rate of return for the project. 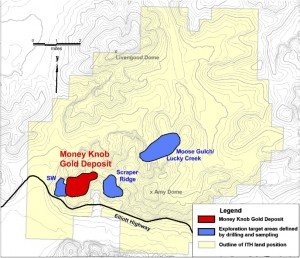 The strength of the management and technical team is remarkable.  Tower Hill has the know how and a proven track record of Alaska success to possibly bring Livengood into production.  Some of the management team has worked on permitting and construction of some of the largest mines in Alaska. 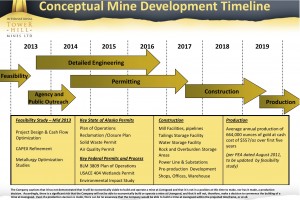 The company is very well positioned both financially with great shareholders and technically with a proven track record of Alaska success to build the next major gold mine in North America.  Remember with Tower Hill, one is investing alongside some of the smartest minds in the business.  New investors have the advantage of buying below the purchase price of the institutions as the stock tests multi-year lows.

Despite having a very difficult two years, I believe that 2013 could be a turnaround year as they come closer to publishing a bankable feasibility study.  Just be aware that a major could gobble them up beforehand.  Look for 2 year downtrend to be broken to the upside. 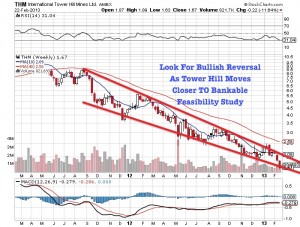 Disclosure: Author owns THM and THM is a sponsor of my free website and newsletter.