This past week I have had to cut back on my publishing due to my travels to the Precious Metals Summit where I had back to back meetings with some of the top fund managers, investors and over 30 of the highest quality junior miners.  I was able to get updates in person of current and past holdings as well as potential new first class opportunities with huge catalysts ahead. 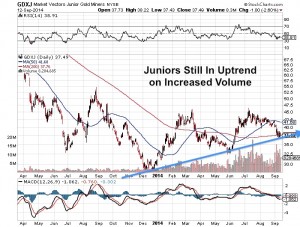 There is no doubt about it we are in the midst of a major low in gold and silver after one of the longest bear markets since Bre X.  Gold and silver are testing lows at $1200 gold and $18.50 silver.    It has been extremely painful bear market with many of these junior miners which were trading at $10 are now worth $.10.

However, the major funds and miners were well represented in Denver meeting with the juniors and have not given up.  Merger and acquisitions are increasing with the recent deals of Osisko, Cayden and Brigus.  Remember the producers are under pressure as they have to cut back on high cost production and are looking for lower cash cost resources in the junior mining sector.

That may be why Agnico Eagle paid over $205 million for Cayden's early stage high grade gold discovery.  Recent valuations of M&A transactions gives us a benchmark in analyzing future investment opportunities.  Remember Cayden was very early stage and did not have a resource.  They just had exceptional drill results.  That is why I do not ignore early stage explorers trading at less than 1/10th of Cayden's valuation.

Keep a close eye on high grade explorers such as Barisan Gold (BG.V) and Canamex Resources (CSQ.V).  They have minuscule market caps but huge high grade drill results.  I would speak to management of both companies and read both Barisan's and Canamex's recent news releases which are extremely impressive.

I will be carefully digesting some of those ideas I gathered in Denver both on the markets and the miners and share the findings with my premium subscribers over the next few days and weeks.  I will give you some leads from some dynamic companies I met with at the conference gaining significant traction in the marketplace despite weak gold and silver prices.

1)Red Eagle (RD.V or RDEMF), a junior gold miner in Colombia just announced a Definitive Feasibility Study which shows very low cash costs, capex and some of the highest margins in the junior industry.  It is beginning to breakout past $.30 and gain recognition by the investing public.  A final permit could be coming in the near term which could prove to the world that this could be the next major producer in Colombia generating free cash flow quickly to shareholders. 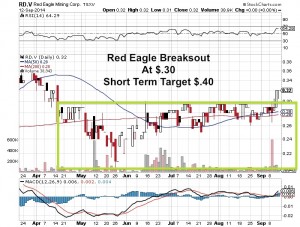 2)Integra (ICG.V or ICGQF) a junior gold miner in Quebec is getting serious about production as they just acquired a major mill in Val d'Or for $7.5 million in cash and shares.  This is one of the few juniors with financing, a high grade asset and a mill in the major mining district of Val D'or.  This acquistion considerably derisks the asset.  Look for further drilling success to boost recognition for this exciting high grade story progressing towards production in a gold district which just saw the major Osisko buyout by Yamana and Agnico Eagle. 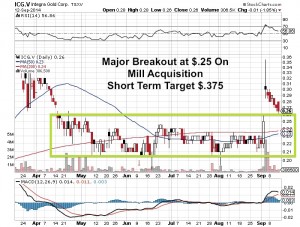 3)Wellgreen (WG.V or WGPLF), a junior platinum miner in the Yukon announced a resource and metallurgy update which is a major development.  It makes me quite excited for the upcoming updated Preliminary Economic Assessment set to be released in the 4th Quarter. This is one of the only advanced Platinum and Palladium deposits in North America which could eventually rival Stillwater. Unlike gold and silver, palladium and platinum are outperforming.  One could buy Stillwater, a North American PGM Producer with a market cap of $2 billion or they can look at this junior trading with a market cap under $60 million.  I have time and am looking for outsized gains and leverage in what may be the next Stillwater.

The time to buy and research the highest quality assets are during these sell-offs when the gold and silver charts get aborted and as support is violated.  A break into new lows may set off a margin call where the price could move down rapidly.  At that time some of these companies should be bought and not sold into the panic.  Capitulation and when the sentiment is extremely negative  is when the best buys can be found.  Look for major capital to come into these situations after the weak hands are shaken out.

Investors expectations about the US recovery may be overblown. The US dollar is strong now because Europe is very weak now as they are in a major conflict with Russia over Ukraine.  The US Dollar is being bought as a purported safe haven temporarily as investors expect the ending of QE.

Capital should eventually transfer from overbought equity and bond markets into commodities and precious metals.  This has not been seen yet and I may be a little early, but history is on my side that hyper-inflations follow deflations.  Better early than seconds too late.

Most of the investors and companies at this conference were the high quality survivors during the bear market that are still able to raise capital despite gold correcting more than 30% over the past couple of years.  These winners tend to be the biggest winners in the coming bull market.  These discounted valuations in the juniors have not been seen in the history of the junior markets.

The smart funds, major miners and high net worth individuals attended as the strategy may be finding the best stories that will not only survive but come out stronger after the final low in precious metals is formed.

The precious metals are in the longest bear market since Bre X.  The US dollar and S&P500 are irrationally overbought.  Gold and silver may once again test the 3 year lows at $1200 gold and may break that support causing a panic sell-off which ends in capitulation.

A flush out could be coming to mark the extreme bottom and turning point in the precious metals bear market.  This is the best time to have a roster of  high quality juniors with strong treasuries, excellent assets, management with track records and clean share structures.

Don't panic as this is when some of the smart contrarian money will buy these real assets for even more pennies on the dollar then what they are trading at now.  Look at 2009 after the credit crisis when so many people walked away from their homes only to try to buy back in at much higher levels. Don't get sucked into the US Equity and Dollar euphoria as investors forget about the risks of all the printing of this money.  Don't sell out your junior miners for pennies on the dollar at possibly the worst time.

Remember this is the longest bear market in the juniors since the Post Bre X 1997-2001 debacle.  The sentiment may be at the point of extreme capitulation causing a panic sell-off.  That is why the smart money may be ready to pounce on capitulation into the highest quality juniors.  The extreme negativity when there are only sellers usually marks the bear market bottom.

Disclosure: I am long juniors mentioned in this article and they are website sponsors so conflicts of interest apply.