Why Is This Junior Gold Developer in Quebec Outperforming GDXJ By Such a Wide Margin in 2015?

Investors are chasing stocks higher on margin, while commodities and precious metal investments are being ignored and trading at fractions of their true value.  We must learn from history about the negative correlation between commodities and stocks.  When one market rises the other usually falls.

Over the past four years we have seen a huge rise in the general equity markets while most of the junior gold miners have been forgotten. These bear markets in natural resources when financing dries up and mines are closed fuels the next bull market as the supply dries up.  The larger and more severe the decline, the greater the subsequent rise.  Exploration budgets for metals and energy have been cut drastically over the past few years.  Where will the new mines come from once demand picks up?

There have been very few successful discoveries like Integra Gold (ICG.V or ICGQF) has made at their Sigma-Lamaque Deposit in Val D’or, Quebec.  They continue to attract major capital and appear to be one of the most active and best performing junior gold developers in the industry as they are developing a high grade asset which could be economic even with declining gold prices. Look at the outperformance of Integra Gold  compared to the Junior Gold Mining ETF (GDXJ). 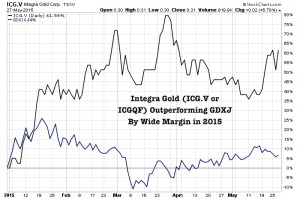 They recently released exploration discovery news that may be quite pivotal for this project as a takeout target.  See the news release by clicking here.  Integra intersected the thickest interval ever reported from the high grade Triangle Zone.  The geological modeling has confirmed multiple structures accounting for additional mineralization.  In addition, new zones were discovered below the resource estimate boundary.  This deposit appears to be growing in size and increasing grade, its open laterally and at depth.

In addition, Integra just announced a critical permit necessary for the beginning of underground development work at the Triangle Zone needed to complete a bulk sample.  Quebec is one of the top mining jurisdictions in the world when it comes to permitting and this approval represents the beginning of the next major phase of underground exploration.  What is crucial to note from the Press Release is all of the permitting work that was completed and what is expected as Integra moves closer to eventual production. 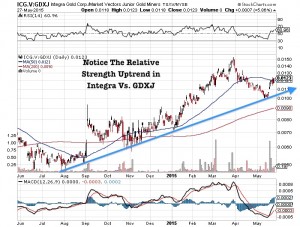 With the recent acquisitions in Canada of Osisko, Probe and Mega, I expect Integra could be a potential target and should continue to outperform the Junior Gold Miner ETF (GDXJ).  Notice the relative strength uptrend in the chart above.  That trend should continue as Integra makes great progress on the development of the Sigma-Lamaque Mine and Mill.

Integra has been in a strong uptrend since November of 2014.  Increasing accumulation in 2015 combined with the recent high volume MACD Reversal could lead to the next breakout at $.35. 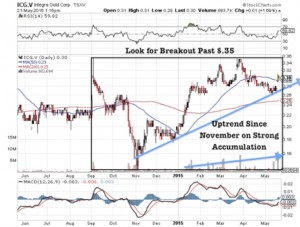 See my latest interview with Integra's Chairman George Salamis below.

Disclosure: I own shares and warrants in Integra.  They are a website sponsor.  Do your own due diligence as I am not a financial advisor.