Goldstocktrades.com Picks #1 Stock on TSX Venture For Two Years In a Row

The markets especially the small cap arena and specifically the niche junior resource area is not for the faint of hearts.  Learn from the Home Run King Babe Ruth.  If you fear striking out, you can't hit the home runs.  Despite a historic bear market where fear and negativity was pervasive I was not held back.  I continued to publish stories and although I struck out a few times I hit some amazing grand slams over the past two years facing the nastiest curve balls, fast balls, change ups and bean balls. 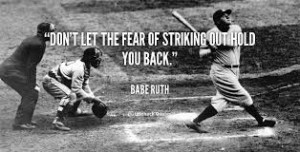 In this small cap arena its easy to find people who talk a big game but an investor should ask do you have examples of winners.  I have been blessed to pick some of the top performers during one of the worst bear markets in resources ever.

It is with great honor and privilege to announce that I have been blessed to find the top junior mining performers for the past two years.  It is in gratitude to you my subscribers who are incredibly intelligent and some of the most astute readers in the entire mining sector.

1)In 2014 Western Lithium (WLC.TO or WLCDF) was the #1 ranked stock on the Best 50 OTCQX in 2015.  I have been a long term believer in this story for a couple of years highlighting this story throughout 2014 when Tesla came into Nevada.  They have now two of the best lithium assets in the world in Argentina and Nevada.  Look at this interview with the former CEO back in April of 2014.

2)Three years ago at PDAC I spoke at the newsletter writer seminar and highlighted an obscure Niobium deposit in Nebraska which was laughed at by the crowd.  It later became the number one stock on the TSX Venture in 2014 Niocorp (NB.TO or NIOBF), which I first recommended when it was still known as Quantum Rare Earth Developments.  They are developing a world class Niobium mine in Nebraska.  Listen to my interview with CEO back in April 2014 before they made their major move and gained so much interest from the world.

3)Today Pure Energy Minerals (PE.V or HMGLF) was just announced as the top performer in 2015.  I first highlighted it back in July before they made their major move and announced an off take supply agreement with Tesla (TSLA).  The stock was up 167% on the year.  They are working on a Pre Economic Assessment on their Nevada Clayton Valley Brine Project which is right now the most advanced lithium brine deposit in Nevada.  See my recent interview with Pure Energy's CEO Robert Mintak.

4)The only junior gold mining stock that made it onto the entire OTCQX 50 and ranked #6 in the entire market in 2015 was Integra Gold (ICG.V or ICGQF) which I featured in 2015 as my best junior gold stock.  They are developing a high grade underground gold deposit in Val D'or, Quebec and recently received a strategic investment from the major gold producer Eldorado Gold (EGO).  See my interview with Integra's Chairman George Salamis from March of 2015.

I am so excited to see a return of interest to the mining sector.  In the coming bull market even the lower quality names will rise.  However, its the bear markets where the real winners and true analysts are discovered.  I am very honored to be able to have highlighted and invested in these top performers sharing these stories with you.

Disclosure: I own positions in all these companies. Pure Energy and Western Lithium are current sponsors.  Niocorp and Integra are prior sponsors.   Be aware of conflict of interest and I am not a financial advisor.  Small cap stocks are risky and require your own due diligence.  Always consult a registered financial advisor.