In a recent article I wrote, "Gold and silver could gap higher by the end of 2014 and the top notch juniors could skyrocket."  I expected a breakout at $1205.  It appears gold may be breaking that downtrend today. 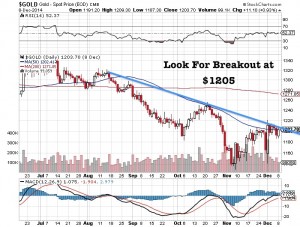 For a couple of years metals were knocked out of favor and now oil is on its knees with a major three month deflationary selloff that came out of nowhere.  This black swan may be due to increasing tensions between the West and East.

Japan and Europe are turning on the printing presses to prevent deflation causing investors to flock to US dollars and the S&P500.  Don't be so quick to chase them into the overbought markets.

The Fed needs to see more inflation and a cheaper dollar before raising rates.  Once investors wake up and realize The Fed can't tighten in this environment, the dollar parabolic rise will pop.  Once the dollar rally fizzles out investors should once again return to the beaten down junior gold and silver sector which is testing 2008 Credit Crisis All Time Lows.

Remember we are in tax loss selling season and the time to buy discounted junior resource stocks is over the next 3 weeks.  Since we are at such a low base the January effect could be quite powerful.

Cash is now king as other nations are following Europe and Japan beginning a major fiat currency war. The Russian Ruble is crashing and now the Russian economy is entering a major recession possible depression. What we are seeing with increasing tensions between the West and Russia and China and Japan are trade wars.

History shows that these policies lead to economic crashes which the metals and oil may be forecasting. These deflations could be followed by hyperinflations as governments resort to currency devaluations through quantitative easing.

Consumers in the US may be excited to see gas prices under $2 and their inflated retirement accounts, however these low prices could cause a ripple effect throughout the entire global economy.

We could be on the verge of the next major worldwide banking crisis especially in resource rich countries such as Russia, Canada and Australia. Major banks have been loaning out billions to oil and gas producers for production, construction and exploration. If we do not see a quick v shaped recovery expect the global unemployment rate to once again spike as well.

The US may be forced once again to resort to Quantitative Easing in 2015 to prevent this runaway US dollar price spike. Its the Fed policy to promote inflation and a stable dollar. A strong dollar moving parabolically higher could be a major challenge to US banks sitting on bad real estate and energy loans.

This could cause banks to stop lending and begin a massive deleveraging similar to 2008. Remember don't fight the Fed who want asset prices to remain moving higher. They will try all attempts to prevent a runaway US dollar through competitive devaluation. 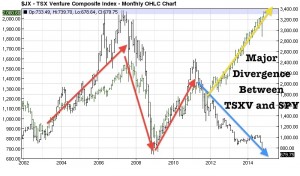 Notice the Canadian Venture is now testing 2008 lows while the S&P500 has broken way above pre Credit Crisis 2007 Highs.  Since 2011, we have seen a decoupling between the S&P500 and the TSX Venture.  For the past decade the two indices moved together.  This changed in 2011 when the US began to slow down QE while the rest of the world accelerated it.  This may have caused a historic decoupling not seen since the Dot Com Bubble in the late 90's.  If the Venture returned to previous 2007 levels and comparable ratios to the S&P500 then the TSX Venture could be trading at multiples of its current valuation.

Learn from market history and don't be a fool chasing the latest fads and promos.  Do not believe this time is different and that this historic decoupling between the S&P500 and the TSX Venture will last forever.  Remember that everything is cyclical.  Markets revert back to the historic mean.  This means that now may be the time to continue building positions in selecting high quality and experienced junior mining companies trading at historic lows.  Be careful of buying US large caps at extremely high premiums right now or shorting junior miners or precious metals.  It may be time to start taking profits in the large caps and accumulate high quality and well financed juniors. This is not a time to panic and sell your junior miners for pennies on the dollar. You could mistakenly sell your shares right before a major discovery.

I expect investors to look back at this time in amazement to see what sort of bargains one could buy. For instance, investors were market selling Corvus (CORVF) for no good reason other than panic in this recent correction and now missed out on their biggest discovery at North Bullfrog yet. Corvus just hit 36 meters at 17 g/t gold and this is just the first release of a series of drill results. This new zone is 5 to 15 times the grade of the system overall and significantly expands the value of this project.

Corvus CEO Jeff Pontius said, "Hole NB-14-400 is the best high-grade broad intercept drilled to date on the North Bullfrog Project and has now clearly outlined our large Gap Area "Shoot Target". With only 3 of 18 completed holes reported in the ongoing Phase 2 drill program, the initial results are encouraging and continue to showcase the expansion potential as we unlock the high-grade shoot zones of the Yellowjacket Deposit."

See the full news release today by clicking on the following link: http://www.corvusgold.com/news/index.php?&content_id=223

See my latest interview with Corvus CEO Jeff Pontius by clicking on the following link: https://www.youtube.com/watch?v=QxXUSv67CS8

Disclosure: I own Corvus and the company is a website sponsor.  Be aware that I would benefit if the share price rises.  Do your own due diligence.