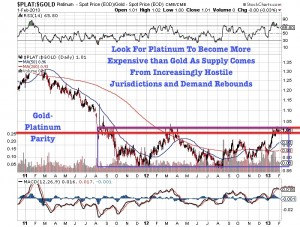 Platinum is breaking out compared to gold as South Africa which supplied three quarters of world production continues to struggle with labor issues and possible nationalization.

The world's largest producer of platinum, Anglo American Platinum (AMS), reported a major loss for 2012 and warned of a potential supply shortfall as labor protests and nationalization fears continue to increase.

South Africa has become increasingly volatile and demand for platinum is picking up due to increased sales for new automobiles.  A supply shortfall in platinum and potential price spike could happen in 2013 as a major deficit in PGM's could be developing.

Last fall during the beginning of the South African mining strikes I penned a bulletin on why platinum is providing investors a rare buying opportunity not seen in more than 25 years.

I also forecasted that platinum's discount to gold will not last long as we were in the beginning of a major rebound in the Far East and a risk on rally in housing and financial stocks.

Platinum underperformed gold in 2011 and 2012 as a safe haven.  A slowing economy and deflationary forces in Europe and the U.S. back then favored the yellow metal as a risk off investment vehicle.

However, that trend may be changing quickly as investors may be realizing that the Central Banks have used massive monetary weapons to fight deflation and that we are starting an inflationary cycle evidenced in the rebound in the most toxic sectors which the government has been bailing out since 2008.

The platinum to gold ratio is making a significant breakout as platinum's price moves above the price of gold.  Investors who listened to our bullish report on platinum a few months ago realize that platinum's discount to gold was extremely unusual.

It happened before in 2008 and then back at the end of the year in 1996.  Each time this represented a great buying opportunity as platinum supply is extremely tight and historically averages double the price of gold.

Of course in 2011 and 2012, the debt crisis in Europe and the U.S. led to a major safe haven rally where gold outperformed platinum and silver.  I wrote a few months ago as soon as the strikes hit South Africa that we may be near the bottom. 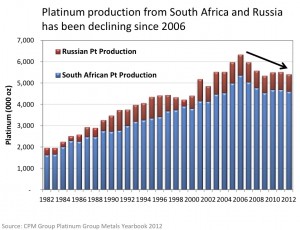 Remember over 90% of world platinum supply comes from Zimbabwe, Russia and South Africa.  These are not mining friendly jurisdictions.

This pressure on supply from Africa combined with a robust recovery in China manufacturing may be the factor for the outperformance of platinum.

Remember the cost of mining platinum in South Africa is marginally profitable at these prices as the costs are quite expensive as South Africa has the deepest and most dangerous mines in the world.

The fundamentals for platinum appear to be stronger than that of other monetary metals as there is great potential for lower mine supply from South Africa in 2013.

The price of platinum may be turning higher.   Do not be surprised for major miners to cut back on platinum investments in South Africa and look for additional supply in North America.

Enter center stage, Prophecy Platinum (NKL.V or PNIKF) who has a new top notch executive management team with a proven track record of success.  The company is trading at multi year lows around a $1.

This team wants to take forward this undervalued and unique world class, undeveloped platinum project which could potentially supply North America for years.

There are not many projects of this scale outside South Africa and Zimbabwe. Prophecy's Wellgreen Deposit with more 7 million ounces of gold, platinum and palladium, 2 billion lbs of copper and 2 billion lbs of nickel could be an attractive opportunity for investors.

Prophecy Platinum conducted a major drill program in 2012 to test extensions of the deposit during a year when many juniors in the Yukon were dormant.

The company just released very good drill results that demonstrated wide intervals of impressive mineralization.   Most of the zones remain open at depth and along trend.

The geological team is getting ready for a new drill program to advance this project later this year.  It should be an active year for Prophecy Platinum in 2013 as they advance their flagship Wellgreen Project which could be one of the largest platinum and palladium producing properties in North America.

One must remember that Prophecy Platinum's Wellgreen could also produce nickel and copper whose revenues could drive down the cash costs for the platinum and palladium. 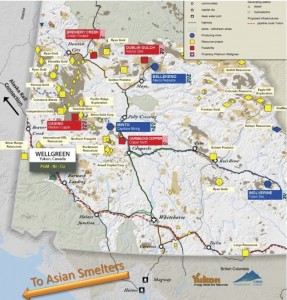 Wellgreen was a former producing mine so the permitting should be expedited.  Additionally, Wellgreen is in the mining friendly Yukon just 15 kilometers from the Alaska Highway which leads to nearby seaports.

Listen to my recent interview with Greg Johnson, the new CEO of Prophecy Platinum.  Greg was co-founder of Novagold, with over 25 years of mining experience and has been involved in raising over $650 million for junior miners.

With this new management team I expect an exciting year for Prophecy Platinum which may be nearing a multi-year bottom. 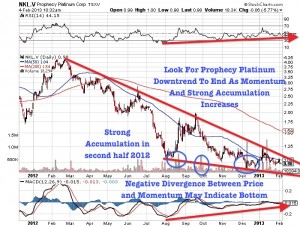 Look for two year downtrend to be broken to the upside as the negative divergence between price and momentum may be indicating a potential reversal of trend.

Disclosure: Prophecy Platinum is a sponsor of my free website.  Please see my disclaimer and full list of sponsor companies by clicking here...