The trend towards resource nationalism is taking a major toll on the potential supply of platinum.  Simultaneously, auto sales are rebounding to levels not seen since before the credit crisis in early 2008.

Despite global supply concerns, increase of resource nationalism and rising industrial and automobile demand, platinum is still undervalued compared to gold and are far below pre credit crisis highs.  This may be a short term phenomenon and over the long term PGM's may provide a great buying opportunity and outperform gold. 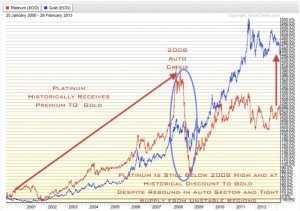 Over 90% of platinum supply originates from South Africa, Zimbabwe and Russia. Zimbabwe has recently nationalized the assets of Zimplats.  This could have a major impact on potential supply and may increase interest for advance platinum assets in geopolitically stable mining jurisdictions. 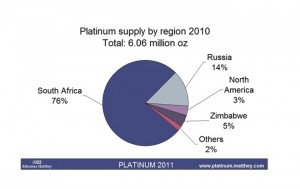 Right now, platinum may be undervalued to gold as it is 30 times more scarce and has averaged historically to be at least double the price of gold.  Likewise, many of the platinum junior equities are deeply undervalued even compared to the bargain basement junior gold miners.

This undervaluation may be due to the fact that currently the PGM market is much smaller than gold and lacks major institutional coverage.  This may change as major investors and large platinum miners look to diversify into more stable areas such as the U.S. and Canada.  Over the long term these development stage companies could be rerated as more funds enter the arena and as the public becomes more aware of the potential supply shortfall.  Since high quality platinum projects are rare, once institutional and retail money comes into this sector it could cause a valuation jump in these assets. 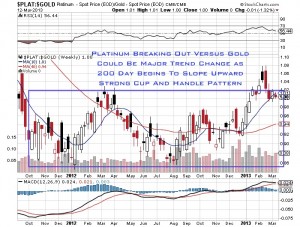 We may be witnessing the genesis of that move as the platinum price breaks out versus gold and as the 200 day begins to slope upward for the first time in several years. Recently, we have seen increased financial interest in the PGM space with one platinum miner raising over $180 million.  This miner soared after the financing.  Many expect more institutions to invest capital into this space after seeing this recent success.

One company which has a proven management team that has raised hundreds of millions of dollars is Prophecy Platinum (NKL.V or PNIKF) that controls the world class Wellgreen Deposit in the mining friendly Yukon.  Surprisingly, it is still trading at multi-year lows as the many investors are completely unaware of this undervalued situation. 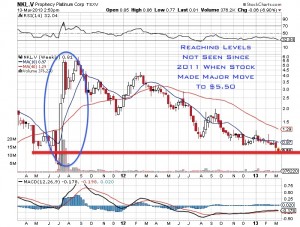 This Wellgreen deposit has recently shown some impressive exploration success.  The team is focussed on understanding the recent drill results and are developing a model to publish an updated resource.  The market has completely ignored that some of those drill results showed wide mineralization.

Some of the best holes ever drilled came in this last round and will be followed up later this year beginning in June and should continue through the Fall.  Prophecy Platinum already has a PEA which shows impressive economics and may draw the attention of major players looking for a quality platinum project in a stable jurisdiction.

Prophecy Platinum just announced a project update which stated, "With our new, experienced senior management team in place, 2013 should be a transformational year for Prophecy Platinum...With the scarcity of large PGM projects outside of southern Africa and Russia we believe that the scale of Prophecy Platinum's projected North American PGM production will become of interest to potential investors in the sector...We look forward to reporting on the exciting developments ahead for the Company and its projects as we remain focused on delivering increased shareholder value."

Watch my recent interview with CEO Greg Johnson from Prophecy Platinum below...

In the interview, we discuss the current market environment and why Prophecy Platinum may be poised to continue to make major progress both on the geological and financial front.

Disclosure: Prophecy Platinum is a sponsor on my free website and newsletter.