Focus on Stable Platinum and Palladium Miners in N. America 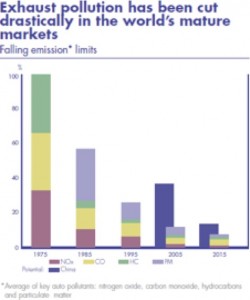 As we can see that China is the major area of growth for PGM’s as they are now the leading consumer of vehicles and they have no supply of these crucial elements. Platinum and palladium demand has been growing 4-5% annually. Global vehicle production rates are at record levels and climbing. The main industrial demand is catalytic converters which is vital for emerging economies which is driving this vehicle growth. North America already uses catalytic converters but emerging economies are implementing clean air standards for the first time. China has even a larger market in vehicles then the U.S., which means the demand for PGM’s could even rise faster. 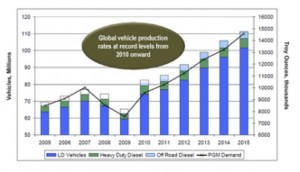 Most PGM's especially platinum come from South Africa where these mines require large labor forces operating underground. Mines are high cost and reach incredible depths which are not fit for humans. 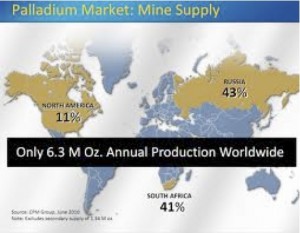 Labor prices are soaring and these mines may not be mechanized due to the costly risks.
Salary increases and strikes are making it quite challenging for the producers to remain viable. According to some studies the majority of the current platinum mines are uneconomic based on current prices due to rising labor and energy costs. If we witness more strikes even the economically viable miners may turn off supply. Don’t think Zimbabwe another PGM rich country is any better. This is a country completely unstable. They just announced that miners must now give majority ownership to the country.

Due to the resource nationalism in South Africa and Zimbabwe, smart investors will look for great assets in politically stable jurisdictions. For months I have alerted you to build a position in platinum and palladium and was even more bullish on PGM’s then gold and silver. This is when platinum was cheaper than gold. Now platinum is more than $200 higher than gold. 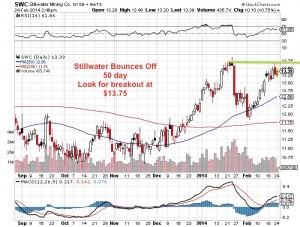 The big bellwether which I recommended for months Stillwater Mining (SWC) is just breaking out. The market may be anticipating better than expected full year 2014 financial guidance out of the only U.S. producer of PGM’s. On the equity side I would only recommend PGM producers in stable jurisdictions such as Stillwater and Wellgreen. Ivanhoe (IVN), Platinum Group Metals (PLG) and the other large South African producers should be avoided.

Stillwater may gain investment interest and benefit from this rebound in PGM’s. Unfortunately, the company is revamping itself after the prior management made a stupid move to buy a copper-gold deposit in Argentina. I believe they may write that mine off and buy Wellgreen Platinum (WG.V or WGPLF) in the Yukon. The deficit in mine production combined with a greater degree of investment interest could put M&A mode back into the PGM complex. We just witnessed Goldcorp and Osisko. 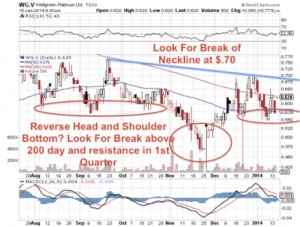 I sent the above chart to my premium subscribers back in January.  The stock has made a nice breakout move.  Could Wellgreen Platinum be the next major PGM winner? Look at this breakout as a clue. 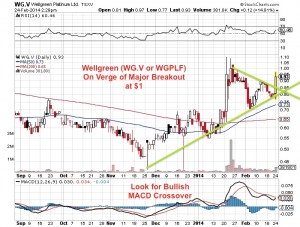 The level of interest in this company should increase in 2014 as the company went through a transition in 2013. Wellgreen Platinum (WG.V or WGPLF) has done a complete restructuring with a new top notch management team, stronger shareholder base and a name change. This could help the company attract larger institutions looking to gain exposure to the platinum and palladium market with a higher quality junior miner.

There are very few high quality junior PGM developers focussed in North America in a political supportive jurisdiction and with reasonable infrastructure. The company’s experienced technical team is developing a new model which hit one of the best drill holes ever intercepted on the property in late 2013.
Management believes there is a higher grade zone on the Far East Zone that they are currently following and exploring. Some of these advancements will be incorporated into an updated Preliminary Economic Assessment set to be released in the second quarter of this year.

This PEA is focusing on the higher grade zones and less costly open pit capability. This company could gain some major attention or be bought out as they get closer to the release of this study and as the PGM market heats up.

I recently interviewed Wellgreen’s (WG.V or WGPLF) CEO Greg Johnson about recent developments both from a corporate and technical perspective which can be seen below.

Greg Johnson is well known in the mining industry as he co-founded Novagold and is financially competent as he raised around $650 million in his career. The new management team and shareholder base gives me confidence that Wellgreen could be a major story in 2014 as the PGM market rebounds.

Further information about the Company and its projects can be found at www.wellgreenplatinum.com or call +1.888.715.7528 (Toll Free)

Disclosure: Author owns WG and company is a website sponsor.