We are seeing some healthy profit taking in precious metals after making an explosive breakout over the summer.  Investment demand after QE3 is increasing as investors seek alternatives to fiat currencies which are being devalued by Central Banks all over the world.

We may see consolidation and volatility in the markets until after the U.S. Presidential Election, when most investors realize that not much will change.  All over the world governments are looking to boost unhealthy economies and this will continue regardless of who is in office.

Major infrastructure projects will probably be announced after the election both in the U.S. and China to boost employment. Additional means to boost the velocity of money and encourage risk on investments will be promoted by punishing hoarders of cash and treasuries.

In addition, we have serious supply concerns as the majors delay large mines and South Africa one of the largest producers of gold, platinum and palladium is facing the worst and most violent labor crisis in decades.  This will not end quickly and may continue to plague the South African mining industry.  This will not only put pressure on the supply of gold, but could cause platinum to spike as more than 80% of the world's supply originates from this questionable jurisdiction.

A Recent CBSMarketwatch interview where I was quoted stated:

“Platinum is still 20% below pre-credit-crisis highs, while gold and silver are approximately 80% higher,” he said. “This deviation from historical means will not last forever....Meanwhile, gold output in South Africa is a worry too. As of mid-October, strikes among Africa’s largest gold producers have cut the nation’s gold production by half, according to Bloomberg."

Read the full article on CBS Marketwatch by clicking here... 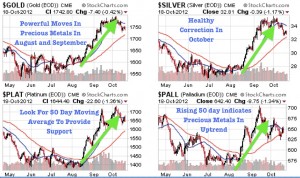 We stated for many years that investing in South Africa may be a risky proposal and it was no longer a mining friendly jurisdiction.   Over the summer we initiated coverage on two North American platinum and palladium as we believed the tumultuous situation in South Africa with violence  would escalate and platinum/palladium prices would breakout.  Since the strike gold jumped from $1600 to $1800 and platinum jumped from around $1400 to $1700.

Since that time the Marikana Miners walked off the job to protest low wages and poor working conditions.  Over 36 strikers were killed.  This was the most violent clash with police since the early 60's.

The strikes have spread all across South Africa.  Many major gold and platinum companies were already dealing with lower production and higher costs.  This turmoil is already putting more pressure on the supply side of platinum and increasing demands coming from the growth of the auto industry in emerging nations.

Platinum producers such as Lonmin who owns Marikana have had to deal with a low platinum prices and rising labor costs as platinum is $100 below the price of gold.  Before the credit crisis platinum was more than double the price of gold.  Since that time, the South African strikes are continuing to be a major thorn in the side of the South African miners such as Anglogold Ashanti, Gold Fields, Harmony, Impala and many more.

The workers have refused pay raises and it does not appear that the strikes will be ending anytime soon.  Do not forget that working conditions in South Africa are much more challenging than other regions as miners descend to much greater depths underground where ventilation is a major concern.

Remember in 2007, over 3000 workers were trapped underground.  This led to some mines being shut down including one of the nations largest gold mines.  South Africa used to represent over one third of gold production in the early nineties, now it is probably close to a tenth.

This implies that new discoveries around the World will need to make up for this decline. In addition to supply pressure on gold, South Africa is the third largest exporter of coal.  But the real concern right now is platinum. Remember South Africa supplies about 80% of platinum to the world.

Platinum supply is only a tenth of gold and a hundredth of silver.  Platinum is not only a monetary metal, but it has a strong connection to the automobile and jewelry industry which is showing increased demand especially from emerging nations.

General Motors sold more cars and trucks in China this past year than in the United States for the first time ever in its 100+ year history.  This signifies the fundamental shift in demand coming from the rising middle class in China.  This rise in demand will need increasing supplies of platinum and palladium which is used in the catalytic converters to reduce noxious air emissions.

The reduced supply from South Africa combined with increased investment demand for platinum coming from the emerging economies could spur the platinum price to far outpace gold.

It's time for our readers to pay attention to platinum as it begins to receive more notice from the mainstream media.  Platinum is still twenty percent below pre credit crisis highs while gold and silver is approximately 80% higher.  This deviation from historical means will not last forever.

Gold and silver have gained investor's attention as a store of wealth, while platinum has been significantly overlooked and undervalued.  The public is still viewing platinum as an industrial metal disregarding the fact that platinum has a history of being used as a store of value for over 300 years.  Many still do not realize that platinum is 30 times rarer than gold, yet currently it is trading more than a $100 cheaper than gold.

During good economic times platinum has been usually double the price of gold.  Before the credit crisis, platinum reached a high of $2252 when gold was below $1000 an ounce.   Despite current pricing, demand especially from emerging nations has far outstripped supply for many years.  Now that South Africa which controls more than 75% of world platinum supply is in danger, the rarest precious metal may soar outpacing gold.

We believe very strongly in diversifying across the metals universe to reduce volatility.  Portfolios should include not just gold, but silver, platinum, uranium, rare earths, copper and other critical metals needed for emerging, modern industrial nations. We may see gut wrenching inflation due to historic monetary accommodations.

In such an environment where we transition from deflation to inflation, platinum may outperform.  This may be the beginning of the outperformance of platinum over gold. Platinum's inflation adjusted high is around $3000.  It is trading now below $1650.  Given the global currency debasement, platinum could double from these levels to just keep pace with gold and silver.  The reason platinum is not the flavor of the day is that it is not yet as liquid as gold and silver.

Major hedge funds and large banks have not participated yet.  Once they enter the arena…watch out for an explosive move.  Now it is time to Look For Platinum Projects In Mining Friendly Jurisdictions.  The implications of the South African supply crisis will accelerate investments in politically stable platinum projects.

This week we highlighted one junior that is trading near 52 week lows and has complete control of one of the largest undeveloped platinum discoveries in the world.  The company is probably on the radar of some of the large platinum producers as a takeout target.

Recently the company published a Preliminary Economic Assessment (PEA) and the big boys may realize this company is trading at a fraction of its Net Present Value.  The lower costs and risks in mining friendly North America may entice some of the larger platinum producers dealing with declining mines and increasing risks.