Why Platinum and Palladium Should Continue To Outperform

There are real supply concerns for Platinum Group Metals (PGM's) as laborers continue to protest for higher pay in South Africa.  Laborers may demand a large pay increase while the South African producers are unable to stay profitable.  There is increasing speculation that PGM's could soar higher.

Investors could use this pullback in the metals to add to platinum and palladium at the price levels it was before the violent labor protests which killed over 44 miners.  South African labor issues combined with increasing auto demand from emerging economies could lead to a supply shortfall and a major price increase in platinum.

Some large producers such as Anglo American may close some mines.  Platinum and palladium are extremely undervalued as most miners can't be profitable at current price levels.  South African companies are struggling to survive with high cost production and rising labor costs.  Investors should look at advanced undeveloped projects in mining friendly jurisdictions.

For several months, I have written to my readers that platinum and palladium may outperform gold and silver.  Now other big investors are catching onto this theme first brought to you right here.

Over the past year, palladium is the only metal that has gained ground in an uptrend and platinum has held 52 week lows while gold, silver, and copper have hit new lows.  The reason behind this outperformance in Platinum Group Metals (PGM) during a weak metal market should be addressed. 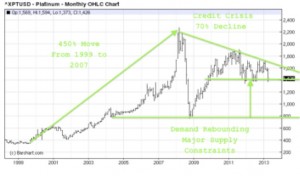 Platinum and palladium have recently outperformed gold and silver after underperforming relative to gold since the credit crisis as the auto industry collapsed and was bailed out by Washington.  Weak demand and volatility in the auto sector caused the industrial side of the PGM market to be in surplus.

However, since that time automobile manufacturers have rebounded significantly.  Demand for automobiles especially from emerging nations such as China are surpassing that of the United States.  These countries dealing with significant air pollution need platinum and palladium for catalytic converters to decrease noxious emissions.

At the same time, labor disputes are putting constraints on supply from South Africa.  Platinum and palladium is unprofitable to mine there as the country has some of the most deepest, dangerous and high cost mines in the world.

Russia becomes the next big player for PGM’s and their stockpiles have been rapidly dwindling.

With the increase in demand for platinum and palladium worldwide and the constraints on supply from South Africa and Russia, I expect to see these metals continue to significantly outperform as they did before the credit crisis in 2008. 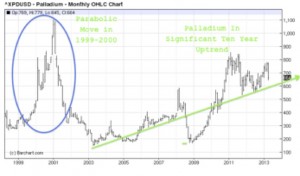 This pullback in the metals complex may give an opportunity for investors to diversify into platinum and palladium, which have both a practical use as a monetary hedge against inflation and as a critical industrial component for clean automobiles.  In addition to automobiles, PGM’s are used in cell phones, jewelry and computers.

Supply for Platinum group metals may be at an all time low, while increasing demand for clean automobiles, investors and consumers will need addition platinum and palladium projects in stable mining jurisdictions.  Recycling can not fill the supply gap. 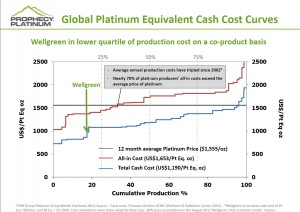 Prophecy's exposure to platinum and palladium which could be in a supply deficit this year is a big advantage in a tough resource market.  There are very few companies with top notch undeveloped projects.

Prophecy's Wellgreen Deposit could be a major answer to fill North American demand for additional secure supplies from new mines in stable jurisdictions.  The increase in demand for platinum and palladium can not be filled through recycling alone.

Prophecy Platinum's Wellgreen Deposit is already a major deposit with a published Preliminary Economic Assessment yet has room to potentially grow.  The company is working to develop some very exciting exploration targets, which they will be looking to drill later this summer. 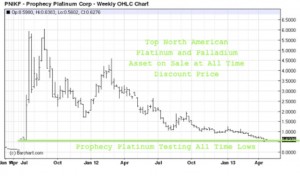 Despite the progress that has been made on the project and the long term uptrend in PGM prices, Prophecy Platinum can be bought at all time lows below $.70.  Savvy long term investors could see major gains as the investment community realizes that additional supply is needed in this market.

Listen to my recent interview with Greg Johnson, CEO of Prophecy Platinum.  We discuss the exploration upside at Wellgreen, why the company could be attracting investment interest in this tough environment and the potential of Wellgreen to supply not only platinum, but palladium too.

Greg has over 25 years of experience, raising over $650 million in project financing.  Greg co-founded NovaGold where he led a team that grew the company from a market cap below $50 million to over $2 billion.  Greg began his career at Placer Dome which is now Barrick.  In addition, to being a top notch mining executive, Greg is also an astute observer of the marketplace.

Disclosure: Author owns Prophecy Platinum and the company is a sponsor.