Gold and silver are good investments to hedge against the coming hyper-inflation but a couple of weeks ago we told our readers that platinum may soar more.  See article by clicking here. 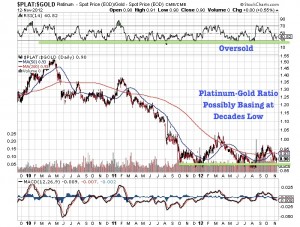 Platinum is thirty times rarer than gold, yet it is trading at a discount right now.  However, this historic bargain situation may not last long as the current supply is under pressure from rising costs in South Africa as the easy nearer to surface metal has already been mined.  Demand for platinum is soaring, not only as a precious metal but in industry as it is used in cars, high tech, medicine and jewelry. 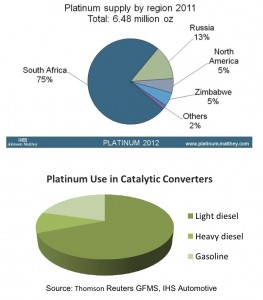 We like gold and silver here as we believe the prices are headed higher, but are even more excited by platinum, which we believe could outperform.

The recent labor turmoil and violence in South Africa which boosted the platinum price may be just the beginning of a major price spike.  South Africa supplies over 75% of the world's platinum and they may be running out as the mines are getting more dangerous and costs are escalating rapidly.  The precious metal is more difficult to extract and mine than gold and silver.

Annual platinum production is less than ten percent of annual gold production.  Platinum over the last thirty years has traded at an average 30% premium to the price of gold.  Now the price of platinum has deviated from the mean as it trades at a discount to gold.  This is a rare and historic anomaly, which will not last forever.

We believe the trend in precious metals will continue higher with possibly platinum outperforming as the price returns to historic premiums in comparison to gold. When Russia curbed its palladium export in 2000, prices spiked from $150 to over a $1000 an ounce.  Russia, Zimbabwe and South Africa control over 90% of global platinum supply and these are not exactly the most stable jurisdictions.  A price spike could occur again, which could benefit some of the undeveloped mining projects in North America.

One of these unique world class discoveries in North America is Prophecy Platinum's (NKL.V or PNIKF) Wellgreen Deposit which recently announced a Preliminary Economic Assessment showing robust economics of a $2.4 billion NPV.  The company has signed an exploration agreement with the First Nations and recently released a positive metallurgical studies. 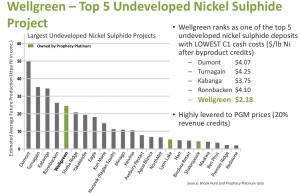 Prophecy's Wellgreen has a very large resource of nickel and Platinum Group Metals with the lowest cash costs compared to the other top 5 undeveloped nickel sulphide projects.  Wellgreen is right near the paved Alaskan Highway.  The nickel content covers the costs and the PGM content provides the upside.  Wellgreen could be one of the lowest operating nickel projects once it comes into production.

Annual platinum production is about 13 million ounces, with only 1 million coming from North America.  Wellgreen could one day provide up to 20% of North American supply. 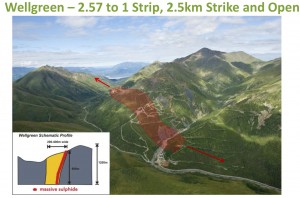 The company assembled a 17.5 km district where there are extensive occurrences with limited drilling.  The existing resource only covers around 2 km of the district.  Over 80% has not yet been explored.  The management team believes that there is additional exploration upside.

Investors should be cautioned that there still needs to be a lot of work on the property as they move into the pre-feasibility study.  The company is making rapid progress and has strengthened its management team this November to move forward to production with the hiring of Greg Johnson as CEO, John Sagman as Chief Operating Officer, Jeff Mason as Chief Financial Officer and Samir Patel as Corporate Secretary.

Prophecy Platinum’s new CEO Greg Johnson was an instrumental force behind Novagold where he took the company from a $50 million market cap to over $2 billion.  Mr. Johnson was a key player in the advancement of the 40 million ounce Donlin Creek gold deposit in Alaska.

In addition, the new COO, Mr. Sagman has thirty years under his belt of designing mines.  Most recently he led the Prefeasibility studies at the Capstone's Minto copper-gold mine. Mr. Sagman knows the terrain as the Minto mine is located approximately 150km northeast from Prophecy's Wellgreen deposit in the Yukon and he knows production as Minto produced 37 million pounds of copper in 2011.  In addition to the Minto Copper Mine, Sagman has built nickel mines and published feasibility studies for Vale Inc, Xstrata and Placer Dome.

This is a major achievement for Prophecy to attract this type of management talent with proven experience.  They now may have the capability to build and successfully operate the next major nickel-PGM in North America.  As the CEO stated in their most recent news release, "...we are putting in place a highly experienced management team to advance the development of the world class Wellgreen PGM-Cu-Ni project in the Yukon.” 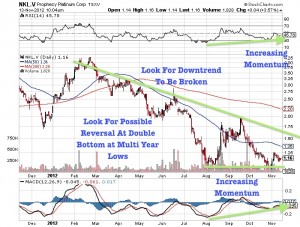 Despite a new managerial team who is highly capable of taking the project into production and a published PEA with a $2.4 billion NPV,  Prophecy Platinum (NKL.V or PNIKF) is trading at multi year lows, below the average prices paid by management, insiders and funds.  We could be forming a major bottom here as the new management team has been assembled to advance this world class asset and take this project forward.

Disclosure: Author or Family of Author May Own Equity Position.  Prophecy Platinum is a Featured Company on http://goldstocktrades.com/blog