Will Japanese Election Spark A Rebound In Uranium?

In early January of 2011, we highlighted a top secret candlelight dinner that was held at the White House where a deal was possibly made that China would raise the Yuan and the U.S. would devalue the dollar.   At that time, we also predicted the China would open banks right here in the United States.  There was no fanfare or mainstream media coverage.

At that time, The World observed the failures of some of the largest financial institutions such as Lehman Brothers, AIG, Washington Mutual and other corporate icons by creating massive bailouts, QE's and running up trillion dollar budgetary deficits due to a decade of being in war in the Middle East.

China is still concerned about inflation and soaring prices due to the intentional debasement of the US currency (UUP) and the artificially lowering of interest rates by the Federal Reserve using tools such as Quantitative Easing or Operation Twist.  Both sides reached a modus vivendi, where the Chinese would allow the appreciation of the Yuan and the devaluation of the dollar in exchange for access to the North American resource market and financial sectors.  Now we see these predictions coming to fruition as CNOOC is taking over Nexen and the Federal Reserve is allowing Chinese Banks to open on U.S. soil.

Please see my January 2011 article on the “Chinamese Twins” to fully understand why the Chinese yuan is continuing to move higher versus the U.S. dollar by clicking here. 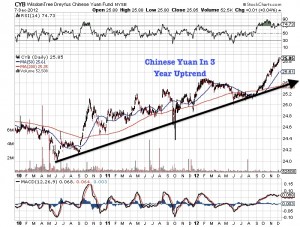 The past three years the Yuan has steadily risen versus the greenback. China is now entering the American financial markets and there are rumors of making the yuan the global reserve currency. Now the Federal Reserve Bank is permitting Chinese Banks to open up right here on U.S. soil.  These Chinese financial institutions have an abundant amount of declining US dollars to fund natural resource projects which are trading at historic low valuations.  The Chinese need to diversify out of its enormous US debt (TLT) and U.S. dollar (UUP) position.  Now may be the time to purchase resource companies whose underlying value is not represented in its price ahead of the Chinese.

One sector where we see a great amount of value is the uranium miners (URA) as The Chinese are going full speed ahead in building next generation nuclear reactors.  The uranium spot price is just over $40, which is near the bottom of its three year range. 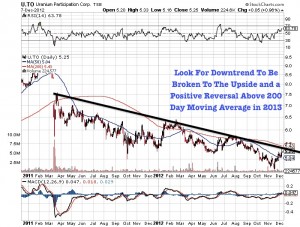 Uranium may represent a bottoming situation.  Look for a reversal in the near term and break above the recent downtrend due to the following reasons.

1)64 nuclear reactors are being built all over the world. A new reactor needs three times the amount of uranium that an operating reactor.

2)The world is already in a supply shortfall.  Mine supply only provides 144 million lbs to a sectors which needs 180 million lbs.  This deficit is being filled by secondary supplies coming from Russia set to end in December 2013.

3)When Russian HEU Deal ends 24 million lbs will need to be made up for or 14% of world's supply.

4)Japan and Germany may start coming back online as electricity costs soar.  Japan is updating 23 reactors.  New elections are coming up on December 16th in Japan with the Pro-Nuclear party in a wide lead.  Part of the parties platform in further monetary easing and promoting the restart of nuclear reactors.

There seems to be a perception that Japan and Germany which has cut back on nuclear following the Fukushima disaster could sell its surplus uranium into the market.  The Russia HEU program where nuclear missiles were converted to nuclear fuel is set to expire by the end of 2013.  This is about 24 million pounds of uranium supply that could be offset by Japan and Germany's excess supply.

However, it is unlikely that the Japanese and Germans will exit nuclear for one reason...soaring electricity costs which are crippling their industries and GDP.

The Japanese have just bought 23 hydrogen re-combiners from Areva to update nuclear reactors with new safety features.  The fact that the Japanese are investing in nuclear shows that they are serious about turning reactors back on.  Japan is headed into an election in December where the opposition party who is pro nuclear is leading the polls.  Will this be the catalyst to spark a rebound in the spot uranium prices?

U3O8 Corp (UWE.TO or UWEFF) is about to publish a Preliminary Economic Assessment (PEA) shortly possibly before the end of the year.  This is a key step for the company as it gives a good value of what the projects are worth to investors.  Some of the large miners have had to delay uranium mines due to the higher cost of production.  U3O8 Corp has a multi-commodity mix at its deposits with vanadium, rare earths and phosphates.  This may be an advantage as U3O8 Corp may be a lower cost uranium producer thanks to the value of the additional byproducts which was recently highlighted in the release of the Berlin Project’s metallurgy.

Recently U3O8 Corp. released the metallurgical flow sheet on its Colombian Berlin Project which was a crucial step for the upcoming Preliminary Economic Assessment as the metallurgy drives the economics.   U3O8 showed that the metallurgical process can extract various commodities such as phosphate, vanadium and rare earths into additional byproducts.  These other commodities could pay for the uranium.  The PEA is scheduled to be delivered by the end of 2012 and should mark a major transition for the company from an explorer into a mine developer.

Richard Spencer, CEO of U3O8 Corp stated, “The flow sheet marks another key achievement by demonstrating how we plan to extract the various commodities from the Berlin ore into saleable products...U3O8 Corp. has made huge strides in advancing the Berlin Project from exploration trenching and resource estimation to development of the entire flow sheet and finalizing the upcoming PEA in just two and a half years. Berlin is fast becoming a company maker that we are showing could be a large deposit and low-cost uranium producer thanks to the value of a suite of recoverable by-products.” 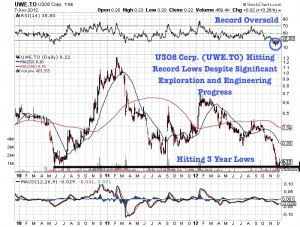 Remember U3O8 Corp is reaching a record oversold level at three year lows.  This may represent a near bottom buying opportunity as the company has made great strides over the past two years which is not reflected by the market yet.

Read the full press release on the metallurgy by clicking here...

Check out my recent interview with the CEO Dr. Richard Spencer discussing potential catalysts in the nuclear sector and how U3O8 Corp has made impressive progress in 2012 by watching the video below.

Disclosure: U3O8 Corp is a sponsor of http://goldstocktrades.com free website.