The “Chianamese Twins” Are Making a Deal

The top officials of the two most powerful nations on earth are to meet today and tomorrow in matters of far-reaching significance. Behind the photo-ops and the speeches there is one basic reality: China and America are joined inseparably at the hip, like conjoined twins. As in all such pairings, each head can have its own separate and distinct personality. The fact remains you can call one capitalism and the other communism, but both heads are mutually dependent on a single life support system. The world financial network provides circulatory nourishment to both heads whose interests are complementary.

Washington needs the cheap dollar (UUP) to pay off colossal debts. China needs to revalue its yuan to counter domestic inflation in such areas as food and basic consumer goods. The Chinese have raised interest rates and bank reserve rules, to little avail. At the same time the Chinese don't want to dry up credit, which would impede their growing economy or slow down exports.

A recent headline in the Wall Street Journal read, "The Bank Of China Moves to Make Yuan a Global Currency." This will come as no surprise to those who read my article in November, in which I spoke about China and Russia beginning to trade in yuan and rubles causing the need for the yuan to be revalued higher.

The Chinese economy is thriving and the country can well afford to revalue the yuan higher. This stronger yuan will make North American resource assets cheaper and put China in the driver’s seat to control many of the large undeveloped assets. At the same time, it's buying gold, silver, and uranium assets hand over fist to hedge itself from a US dollar decline, in which China owns the largest interest.

China wants more gold and silver to support the yuan to ensure that when the yuan becomes the major world currency, it will be more resistant to the swings encountered by fiat currencies. Additionally, it also wants more precious metals to buttress its fiscal balance sheet and what China believes is the eventual replacement of the US dollar as the world’s reserve currency. It is also rapidly developing, modernizing, and increasing its use of uranium, potash, molybdenum, rare earths, coal, and oil and gas.

By revaluing the yuan higher, China will be able to control inflation and rising costs. A higher yuan will also benefit the Chinese investment side, which has already been active making deals in North America. The US dollar will be significantly cheaper for the Chinese, which would allow them to acquire North American assets for pennies on the dollar.

Just recently, the Chinese Investment Corporation, whose focus is to look for investment opportunities abroad, opened its first international branch in Toronto, which is the North American epicenter of resource companies. Its one billion plus people can enjoy more purchasing power through a higher yuan and a higher standard of living with a supply of North American natural resources that could fuel their rapid development.

One of China's goals for the ongoing meetings is to enter more strongly into the heart of capitalism and the North American resource sector. Here the Chinese can get all the gold, silver, and natural resource deals they want. Doors will quietly swing open and everyone will go home happy.

The Chinese will have their desired access to buy gold and natural resource stocks, while the Americans receive a weaker dollar with which to pay off their burgeoning debts. If you're thinking that such a Byzantine arrangement can’t be done, be assured it has all happened before. During the 1980s the USSR sold large amounts of gold secretly in New York. It took three years to become public knowledge.

Another part of this conjoined-twin agreement concerns rare metals, on which China wants to maintain its strategic grip of more than 95% of the world’s supply. I feel the US won't make this an issue. The US will accommodate China in order to persuade it to raise the yuan higher and push the dollar lower. I think this revaluation will be done in a series of two or three steps in 2011, which should eventually move precious metals into new high territories and crush the US dollar. Volatile sell-offs in gold and silver, like I predicted in November and December, which we are currently experiencing now, may present long-term precious metal investors with buying opportunities.

Underneath all of the media hype and adversarial stories between China and America, I read a front page story in the New York Times yesterday called “GE to Share Jet Technology With China in a New Joint Venture.” Expect to hear more deals in 2011 in which the Chinese continue to invest in natural resource assets in North America, while the US continues to search for a way out of the financial crisis.

We may see further bailouts from the federal government as many states are in danger of defaulting. The bankrupt states are already asking Washington for assistance. This devaluation of the dollar that Secretary of the Treasury Tim Geithner and President Barack Obama are asking for is to help the US pay off its debts and be able to raise its debt ceiling with cheap devalued dollars. This should be bullish for precious metal prices where investors will seek shelter from soaring government deficits and a loss of the US dollar as the world reserve currency. 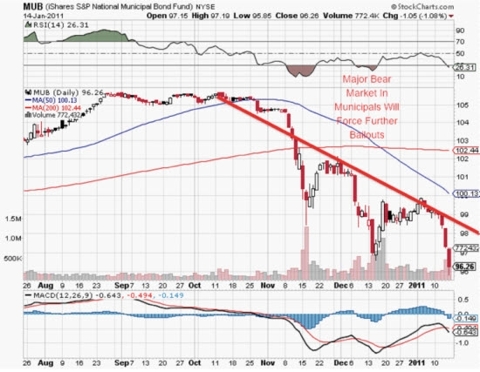