As we predicted, our uranium and rare earth selections are amongst the leaders during this market rebound.  Their underlying fundamentals are strong enough on their own to propel this move.  In addition, the shorts may be running for cover here.  Lastly, the supply demand equation may be taking hold. 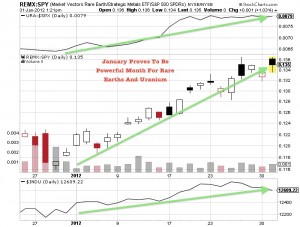 The month of January is a harbinger for what may happen in the year 2012.  This month we have seen both uranium stocks and rare earth stocks outperform the general market despite negative news.  This means the naysayers are having less of an impact as shorts are rapidly covering.

About a year ago we did a series of articles called the “Chinamese Twins”.  This related to a private candlelight dinner held in the White House between the industrial-military leaders of both nations.  (See archives)  The purported arrangements allowed for a strong yuan and a cheap dollar benefitting the interests of both parties at that time.

Fast forward to today, our kaleidoscope reveals a changing situation.  The world economy is affecting previously reached agreements.  The Chinese and the Americans have altered the requirements in the present economic picture.  The Chinese have tried to maintain a strong yuan while the Americans adhered to a cheap dollar.

This brings into focus the specter of the escalation of trade wars with China.  In the 1930’s, it was the Smoot-Hawley Act that exacerbated the Great Depression.  One must believe that the Chinese and the Americans will try to avoid this outcome.

We can only hope that both sides can reach a modus vivendi to avoid a return of the Smoot-Hawley protectionist nightmare which plunged the world into the Great Depression.  Associated with this burgeoning trade war  is the Chinese manipulation of the rare earth quota system of which they are in command.  We recently heard the ruling from the World Trade Organization against China’s export restrictions of critical raw materials.  This may only exacerbate the underlying issue.

Such a trade war goes far beyond economic aspects, but reaches into the very sinews of American national security and defense.  Our phlegmatic Congress should’ve acted long ago to green light and fast-track the development of a domestic source of these critical heavy elements.  Hopefully, they will awaken from their long torpor and rise to the challenges of the times.  Certainly, Alaska has awakened and included Ucore in its 2013 state budget.  Click here to read the press release.

Another company which is witnessing support from European consumers is Tasman Metals (TAS or TSM.V) who controls Europe’s only 43-101 compliant heavy rare earth asset.  These companies are progressing rapidly to produce a preliminary economic assessment in the near future.  Listen to my interview with Mark Saxon, CEO of Tasman.

The kaleidoscope is a fascinating child’s toy consisting of constantly changing designs when held up to the eye.  Today’s market can best be characterized by the potpourri of unpredictable sequences of objects, which fascinates the eye of the observer by constantly changing patterns.  The combinations and permutations of the designs are infinite and subject to unpredictable eventualities.  The marketplace is very much akin to this device with its infinite unpredictability.

Gold Stock Trades views the current marketplace always trying to make some sense out of the melange.  In early October, we called for an unexpectedly vigorous rally which is still in progress.  While there is a pervasive air of pessimism in the marketplace, nevertheless the rally continues.

We feel that this move, particularly in our natural resource sectors, is apt to be a surprise to the naysayers.  In our field of view we observed the record short position in many resource stocks which may be undergoing short covering thereby accelerating the upward moves in a number of our rare earth and uranium mining selections.  Be assured that we are constantly monitoring this situation.  Our projection is based on technical interpretations that indicate a continuation for the S&P500 (SPY) to challenge 52 week highs.  This short term target in the general markets represent a significant milestone in this move.  Should it breakthrough this level, it will have formed a breakout, indicating a continued advance.  One caveat is that sufficient volume must accompany this upward move.

As always we will be monitoring technical developments to determine whether early October’s reversal was the inception of a significant upward move into new highs.  We reiterate that the daily marketplace will do its devious best to confuse and obfuscate the speculator.  The price of lucrative profits is eternal vigilance as we progress along the upwardly rising road of the long term super cycle in precious metals and our natural resource sectors such as rare earths and uranium.