Last week I was interviewed about uranium by The Energy Report and I told them to get ready for doubles and triples in uranium and that we may see a powerful bounce off the bottom in the near term.  Remember this was at a time that the large miners and the banks were bearish forecasting lower price targets.  See the article and charts by clicking here…

Less than one week after that interview was published Japan announces that two reactors are approved to be safe and are able to be turned back on.   This is a psychological game changer as the uranium priced has slid for more than three years over 60% as Japan idled their reactors after the 2011 Fukushima Disaster.

Uranium has hit decade lows due to the closures in Japan.  Many believed Japan would never return to nuclear.  They were wrong.

This approval by the Japanese Nuclear Regulatory Authority signals the fact that major industrial nations require nuclear for cheap and clean energy.  This decision by the Japanese NRA tell us the Japanese economy can no longer rely on expensive liquefied natural gas and renewables.  They must turn to the safer next generation nuclear reactors.

Look for the spot price and the uranium miners to reverse on this fundamental catalyst and the negative sentiment to turn much more positive.  The actions of the major producers and banks led me as a contrarian to become more bullish and forecast a bounce off the bottom.

Many of the current producers have had to cancel or mothball higher cost projects due to the low spot price.   Before the news today many of the banks have reduced long term price outlooks and were bearish on the sector.  The banks and large miners may be wrong about uranium.  The current surplus may turn to a deficit very quickly as Japan turns back on the nuclear reactors.

There may be a rally coming up in the junior uranium stocks.  The majors such as Cameco and Rio may underperform as they deal with the many challenges of high cost mines and delays.  Cigar Lake has once again been pushed back by Cameco (CCJ).  Timelines have once again been delayed.  For years, Cigar Lake was dealing with flooding problems. 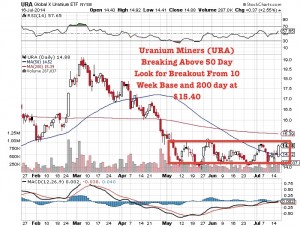 Here is a list of some of my favorite junior miners which I own and are sponsors on my website.

1) Uranerz (URZ) is just beginning low cost in -situ production in the Powder River Basin, Wyoming.  It has processing agreements with Cameco and off takes with some of the largest US utilities.  It just announced a $10 million financing and should pullback providing an additional buying opportunity. 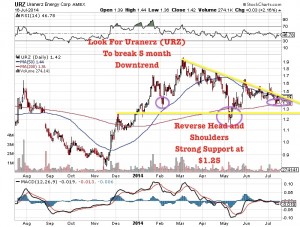 2) Keep an eye on Laramide (LAM.TO) which owns a huge high grade, near surface uranium asset in Australia.  China or Japan could get interested in this project.  Australia had a uranium mining ban which has now been overturned allowing projects like Laramide to possibly be permitted.  This may be one of the best vehicles for North Americans to profit on this change of policy in Australia. 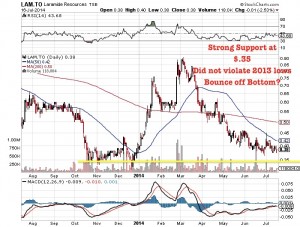 3)This region in Canada called Athabasca has the highest grade uranium discoveries.  Fission which I don't ownmade a big discovery at Patterson Lake South and Denison which I own is finding a monster at Wheeler River.  They may both be good buys but are already richly valued.  Lakeland (LK.V) is a little junior in the Athabasca that has one of the best positions in the Basin with a strong geological team.  It is trading at 50% of its recent financing. 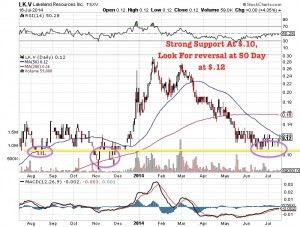 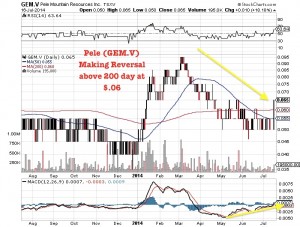 5)Russia signed a deal with Argentina to assist with the construction of two new nuclear reactors in Argentina.  This unknown junior miner U3O8 Corp (UWE.TO) may be on the verge of producing a Preliminary Economic Assessment on a Argentinian Uranium Asset which could be strategic for these nuclear plants. 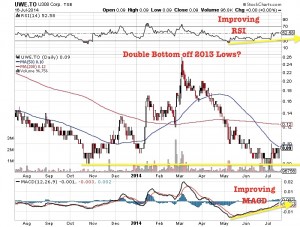 Stay tuned to my premium service for update on these uranium mining companies and others which I believe will be the best opportunities in the coming rebound.

Disclosure: I own these 5 stocks and they are sponsors on my website.

PS I just returned from Colombia and Nevada and will be reporting on these site visits in my premium service.   Make sure to stay tuned as there are amazing opportunities in this market to buy great assets at a major discount.