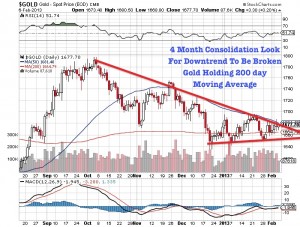 Easy monetary policies with rising balance sheets around the world combined with Central Bank accumulation of gold are beginning to support precious metals prices and the undervalued miners.  China is a big buyer of precious metals as their economy is on pace to overtake the United States as the World’s largest economy.  Not only are the Asians interested in bullion but in early stage exploration opportunities. 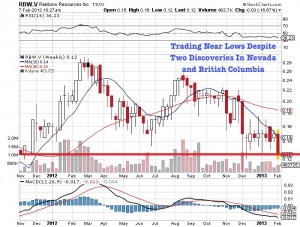 One early stage gold and silver explorer, Rainbow Resources (RBW.V) has recently received positive results from its 100% owned Gold Viking Property in Southeastern British Colombia near the village of Slocan, which showed a discovery of high grade gold and silver near surface. 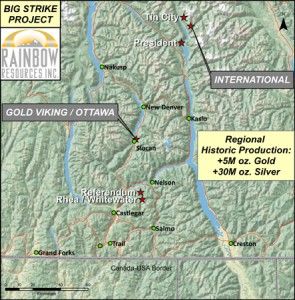 Mining has occurred in Southeastern British Colombia over the past one hundred years and the area has historical high grade production of approximately 5 million ounces of gold and 30 million ounces of silver.

Finding high grade gold and silver on the first round of drilling is truly astonishing.  Rainbow's experienced technical and geological team with over 4 decades of mining experience brings a competitive advantage to this early stage gold and silver explorer who is attempting to make a discovery near historical mines.

The best place to make a new discovery is by looking near an old discovery with tons of historical data.  Gold Viking is adjacent to the Ottawa Mine, Slocan Valley's top silver producer in the 1900's.  Rainbow is looking to follow up on these encouraging results with a second round of drilling at Gold Viking.

The other major project Jewel Ridge is along strike and contiguous to Barrick's prolific Ruby Hill Mine to the north.  Rainbow Resources just announced results from recent drilling which showed high grade silver mineralization that exceeded the companies expectations.

Rainbow believes there is a lot of potential for a major gold and silver resource as Barrick's producing Ruby Hill gold mine borders it to the north and Jewell Ridge may be the continuation of that mineralized trend.  The company has been invited to the world class PDAC Conference in Toronto to present samples from both Jewell Ridge and Gold Viking. 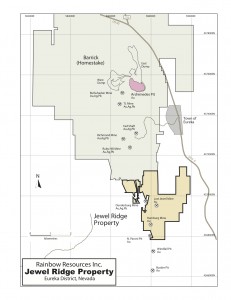 One must remember that this property is located right in the middle of two major multi million ounce deposits in Nevada.  Rainbow believes that there could be a large tonnage deposit at Jewel Ridge as the project has large amounts of historical data.  We are looking forward to assay results which may come out in the next few weeks.

In conclusion, Rainbow has a strong management and technical team which owns approximately 17% of the company.  With around 50 million shares outstanding the capital structure is tight and investors are able to get in near 2012 lows despite two major gold and silver discoveries.  Currently sentiment in the junior mining sector is low and even good news is disregarded.  When this market turns investors will look to see which companies have been active and have made discoveries.  Rainbow may be one that attracts the interest of investors looking to capitalize on the discovery process.

Rainbow has already made a high grade gold and silver discovery in British Colombia and e at Jewel Ridge in Nevada.  Do not forget Rainbow also has graphite claims around the only graphite producer in Western Canada.  The graphite equity market is beginning to see more activity.

Rainbow may bounce off 2012 lows as it has made a significant discovery at Gold Viking and received assays that exceeded the companies expectations in Nevada at Jewel Ridge.  Follow the Rainbow Resources story in 2013 as it attempts to define a major economic precious metals deposit.

Check out my recent interview with Jim Decker VP of Operations for Rainbow Resources (RBW.V or RIINF) where we discuss the goals for the company in 2013.

Disclaimer: Author Owns Rainbow and Rainbow is a sponsor on my free website.