Uranium Price May Spike On Geopolitical Tensions In Africa

Keep a close eye on Al Qaeda in Africa.  France is sending in Special Forces into Niger to protect their uranium sources controlled by state owned Areva.  France is concerned that the fight in neighboring Mali may threaten neighboring Niger which has been a huge producer of uranium for 50 years.

France is dependent on this uranium as nuclear provides over 75% of their electricity.  The threat of Al Qaeda in the region is rising and uranium production is being threatened from terrorist groups.

The terrorist groups already invaded a gas plant in Algeria and France is especially concerned about Niger where AREVA has a huge uranium production base.

These geopolitical concerns could cause a price spike and cause the major uranium producers to acquire uranium assets in friendlier jurisdictions.

Already uranium is in a supply shortfall which could be exacerbated by the ending of the Russian Megatons-Megawatts Program in 2013 which could take 25 million lbs off of the market. 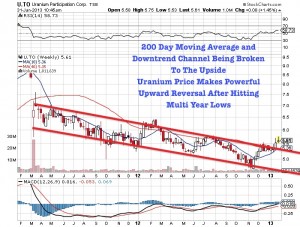 Technically the uranium price is breaking above the 200 day moving average indicating the Post-Fukushima downtrend may be ending which I forecasted several weeks ago.

The study was able to shed light on the potential economics and metallurgical process of the multi commodity project which has uranium, rare earths, vanadium and phosphate.

The PEA shows that the project can be economic with zero cash costs for the uranium as it can be paid for by the additional byproducts such as rare earths, vanadium and phosphate. 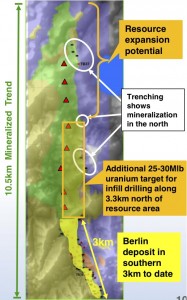 The PEA has an NPV of $181 million at a 10% discount rate. It must be remembered that the PEA only accounts for one third of the mineralized trend.

The company is confident that they can expand the resource possibly three or four times larger than the initial resource which is what the PEA is based on.

So it must be remembered that the recent Berlin PEA is just a starting point for the potential economics of this deposit.

U3O8 Corp. (UWE.TO or UWEFF) has now proven with the publishing of its NI 43-101 PEA that Berlin may be one of the lowest cost uranium producers in the world. 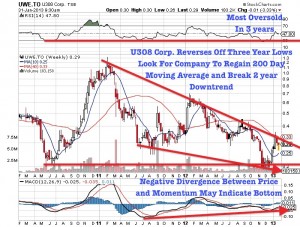 It may become increasingly apparent to the major uranium miners the benefits of the Berlin asset in mining friendly Colombia versus some of the higher cost operations where grades are decreasing, ore is being rapidly depleted or where cash costs are rising rapidly.

U3O8 Corp's Berlin multi commodity resource may be a better alternative to deposits found in Africa which is dealing with increasing geopolitical tensions.

Key milestones in 2013 will be further studies on the metallurgy to improve operating costs.

U3O8 Corp is looking to demonstrate the size potential at Berlin with further exploration. It must be remembered that there could be 60-80 million lbs of uranium at Berlin.

Check out my recent interview with U3O8 Corp. CEO Richard Spencer where we discuss the uniqueness and advantages of this project.

Disclosure: U3O8 Corp is a sponsor on my blog.  Please see my full list of current sponsors and disclaimer by clicking here.