For weeks I have been highlighting that the uranium spot price (URPTF) has been outperforming oil and the S&P500 (SPY) in a major way indicating that there were significant catalysts on the horizon which could boost the uranium miners as well.  This week major news has come across the wire that Canada and India has agreed to a major bilateral agreement over the sale of uranium.

India is moving ahead with nuclear development and needs to source uranium for their reactors.  Australia has been problematic with permitting issues hurting the junior uranium miners attempting to develop projects there.  However, Canada is open for business and optimistic that it can deliver millions of pounds of uranium from their high grade, uranium rich Athabasca district in Saskatchewan. 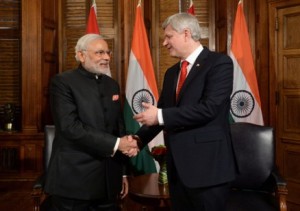 Canada could become the Saudi Arabia of the 21st century as the world turns from dirty coal into clean nuclear power generation.  This India and Canada agreement could mean the green light is on to finance uranium exploration and development.  The pessimism from Fukushima is old news for the nuclear sector and has been replaced with the optimism of major growth from emerging economies such as India and China who are building nuclear reactors at a record pace. 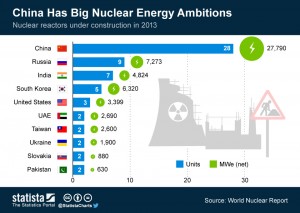 Canadian Prime Minister Stephen Harper who is up for election in 2015 is a great supporter of nuclear energy and expressed his delight to reporters about the deal which has broad popular support both in Canada and India.  India is the second most popular country and they may be at the beginning of a nuclear renaissance.

Similarly, China's stock markets are soaring as investors believe the economy may be turning higher.  They may be on the hunt for acquisitions to secure long term supply as well.  It will be hard to find as many of the marginal producers have already shuttered mines and the low uranium spot price has made it challenging to finance development projects.

There could be a coming spike in the uranium price.  Investors should look at the uranium miners ETF (URA), low cost producers such as Cameco (CCJ) and Uranerz (URZ), which is merging with Energy Fuels (UUUU).

For investors looking for greater leverage they should focus on Fission Uranium (FCU.TO or FCUUF) which is continuing to grow and expand the Patterson Lake Discovery, a once in a generation high grade discovery which has already over 110+ million pounds of uranium.  As soon as it breaks out and continues its upward trend I expect either Cameco, Rio or the Chinese look to chase it. 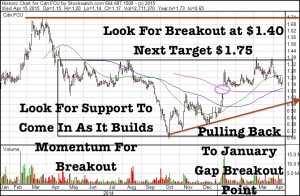 Look for a breakout at $1.40 which should lead to an eventual move to test 2013 highs around $1.75.  Fission recently raised $17.4 million and I believe support and accumulation should begin as it pulls back to the January Gap Breakout Point.

The uranium sector has been beaten to a pulp over the past four years.  Despite the once in a millennium Fukushima disaster which pummeled the nuclear sector, uranium spot price and the uranium mining sector (URA), Fission has been able to outperform and build a market cap of over $460 million CAD.

Fission Uranium (FCU.TO) is continuing to advance one of the greatest uranium discoveries in the Athabasca Basin.  The huge high grade resource of around 110 million lbs with most of the deposit extremely shallow less than 250 m deep should provide huge leverage if the sector begins turning higher and as sentiment changes more positive.

The company recently made an investment in Fission 3.0 (FUU.V) a spinout which holds 18 exploration properties in the Athabasca Basin.  Using a prospect generator model, other junior uranium explorers are partnering with Fission's management to advance these targets.  As the uranium sector turns around I expect Fission Uranium's PLS discovery to be sold to a major such as Cameco, Areva or Rio Tinto and interest could turn to the next big discovery.  Capital will seek out the talented management team which has a track record of building shareholder value.

Disclosure: I am a shareholder of Uranerz, Energy Fuels, Fission Uranium and Fission 3.0.  Fission 3.0 is a website sponsor.  Please do your own due diligence and consult a registered investment adviser before making an investment decision.