In 2014, I highlighted in many reports the increasing capital flowing from the oil and natural gas sector into nuclear power.  Over the past nine months, my prediction that nuclear power will be the leader of the energy sector is coming to fruition as institutional investors flee the dirty fossil fuel industry for clean and cheap nuclear power. 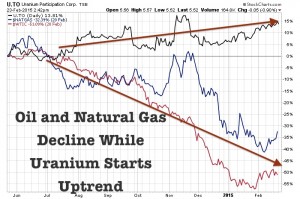 Uranium Participation Corp. (U.TO or URPTF) is up over 15% over the past nine months while oil is down over 50% and natural gas is down by 30%.  This is a great outperformance for the uranium sectors and may be showing investors that nuclear power may be one of the safe havens in the commodity complex.

Attention should be paid to the US which is the largest consumer of clean nuclear energy.  Nuclear reactors are being constructed on US Soil for the first time in more than three decades.  Most of that supply came from Russia over 20 years.  That friendly relationship is ancient history as the West increases economic sanctions on Putin over Crimea. 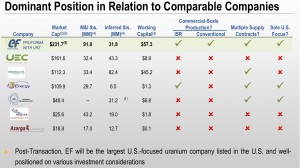 Now Western utilities must search for additional secure supplies emanating from Mother Earth.  Uranerz Energy (URZ) which just announced a merger with cash rich Energy Fuels (UUUU) announced that 19 new wells are in service in the Powder River Basin in Wyoming.  Uranerz began production at Nichols Ranch in April of 2014 and delivered uranium oxide in September.  It could eventually produce up to 770 tonnes of uranium annually.  This low cost production proved to be attractive to Energy Fuels who has a very strong balance sheet and many contracts with utilities.  Energy Fuels has over $57 million in working capital with a sole focus on US uranium production.  The strong balance sheet could place the merged entity onto a new playing field amongst the institutions. 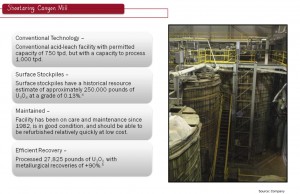 For a more speculative play in the US, keep a close eye on the small cap Anfield Resources (ARY.V or ANLDF) who is in the process of acquiring Uranium One's US Assets.  Some uranium investors may recall that Uranium One was taken out by the Russian Rosatom who are now disposing their US assets for literally pennies on the dollar.  Anfield may soon acquire the Shootaring Canyon Mill and a whole slew of uranium assets and royalties with companies such as Energy Fuels, Azarga and Western Uranium.  In addition, there are surface stockpiles which could represent low cost mill feed sources.  Having near term mill feed, a large uranium base and the Shootaring Canyon Mill one of only three permitted uranium mills in the US, makes Anfield an interesting undiscovered US uranium small cap situation.  See the news release discussing Anfield's portfolio of US uranium assets that they plan to acquire from Uranium One by clicking here... 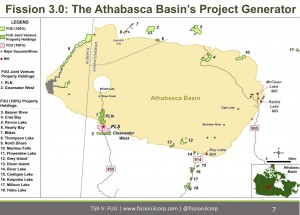 For years I have written about the Patterson Lake South discovery on the Western side of the Athabasca Basin.  This is where Fission Uranium (FCU.TO) discovered this massive 110+ pound uranium resource.  It has a major market cap of around $450 million and early stage investors have already made a fortune.  The management and technical team is the best in the uranium exploration business and I believe that asset will be bought out for a premium.  However, I believe the real opportunity exists at the ground floor of Fission 3.0 (FUU.V or FISOF) which just saw a $3 million influx of cash from its parent company at $.14 cents a share.  News of the deal sent the stock gapping higher 20% but has now closed the gap which may provide smart investors an opportunity to get in at a discount of the recent Private Placement.  I believe that Fission 3.0's management team could be involved with additional discoveries in the basin with the patent pending boulder exploration techniques they have developed.  Fission 3.0 has 16 properties in the high grade Athabasca Basin in Saskatchewan.  One of the properties is Patterson Lake North which is adjacent to the Patterson Lake South Discovery.  Fission 3.0 is the best early stage opportunity in the Athabasca Basin with a great portfolio of projects that has the potential to host a major uranium discovery.  They will follow a prospect generator model and partner with other explorers who will use their money to earn into the projects.  Many of these explorers want to be associated with the Fission team who has a track record of successful discoveries and the capital market know how to fund major exploration programs.