A few days ago I wrote an article entitled "Uranium Spot Price Breaking Out, Junior Uranium Stocks Ready To Bottom?"  In the report I said, "There is a lot of buying in the spot market and it should be soon reflected in the performance of the junior uranium miners (URA)... Look for a breakout."
Now only a week later, the uranium mining etf (URA) is up 11.5% and Uranium Participation Corp (U.TO) up 5% on triple average volume.
Some of our favorite uranium miners are flying such as Uranerz (URZ) up 15%, Pele Mountain (GEM.V) up 14%, U3O8 Corp (UWE.TO) up 33.3% and Laramide (LAM.TO) up 20% and Fission (FCU.TO) up 12%.  It seems as if all the institutions are jumping in after the recent capitulation of some major funds in Toronto.

Uranerz (URZ) is leading the sector powering through the 50 day moving average on huge volume.  The uranium mining ETF (URA), UR Energy (URG), Kivalliq (KIV.V) and Laramide (LMRXF) all appear to be on the verge of breaking out.  The institutions are piling in but have overlooked some smaller cap stories, so there may be some opportunity there for a trade particularly in Anfield (ARY.V) and Pele Mountain (GEM.V).  Volume is huge across the board.
The Republicans had a huge victory taking control of Congress and this could give a boost to nuclear power.  The Democrats blocked funding for Yucca Mountain, a nuclear waste site.  Now the Republicans can push forward a pro nuclear agenda.
This is a huge boom for nuclear utilities such as Exelon (EXC) which is making a new 52 week high breakout today.  The chart looks excellent.  Exelon has an uranium sales contract with one of favorite featured uranium miners Uranerz Energy (URZ) outperforming the uranium equities on my watchlist above.  URZ could be making a double bottom here.
Uranerz just announced that they are making progress on permitting the additional Jane Dough Area south of Nichols Ranch.  Paul Goranson, President and Chief Operating Officer of Uranerz stated, "Now that the Nichols Ranch facility is fully operational, we see the Jane Dough unit as being the next project to be developed. Given that this application is being filed as an amendment to the existing Nichols Ranch ISR Uranium Project license, we expect to see considerable time savings in both the WDEQ and the NRC review and approval process." 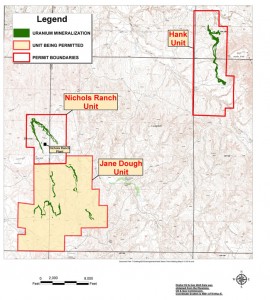 Uranerz began in-situ mining operations on April 15, 2014 in the Powder River Basin, Wyoming.  The management team are well known former Cameco (CCJ) guys and work together with them on the processing.  Cameco is the largest publicly traded uranium miner.
See the news release on URZ permitting by clicking on the following link:
http://www.uranerz.com/s/NewsReleases.asp?ReportID=682010&_Type=News-Releases&_Title=Uranerz-Permit-Application-for-Third-Powder-River-Basin-Mining-Unit-Deemed-...

See my recent interview with Uranerz COO Paul Goranson below.