“We have got to change the dynamic here, in this country, with how we view the importance of minerals to our nation…We can’t move forward until Washington (D.C.) gets out of our way…We don’t want to be sitting in a situation where the Chinese are making all of the decisions as to what we are going to be manufacturing – how, when and where – because they have access to all the critical minerals…We have got them here; we just need the ability to develop them.” -Alaska US Senator Lisa Murkowski

For years I have been writing about the coming US rare earth crisis all over the internet and highlighting the support of an independent US rare earth supply chain.  This past Sunday evening in hit the mainstream media with a 60 Minutes piece on the Chinese monopoly of the rare earths and how the rare earth technology which was developed in the US was sent overseas for just pennies.  This is a bipartisan issue that must be addressed immediately.

Four weeks ago I sent out a piece entitled, "Heavy Rare Earth Prices Moving Higher Since November 2014" predicting that "Increasing interest may return to this sector as heavy rare earth prices continue to gap higher."  See article from February 12, 2015 by clicking here...

For the past forty years many of our best technologies were shipped overseas in the search for cheap labor.  The cost was our intellectual property.  The rare earth market began when the TV entered the American household.  Now the rare earths especially the heavies have seen a huge demand increase in the past few years as the smartphones enter almost every pocket and in new military technologies such as guided missiles.

The Chinese have almost complete control of the rare earth market pricing and the recent decline in price may have been to hurt the new producers such as Molycorp and Lynas who produce mostly the common light rare earths.  However, the more critical heavy rare earth prices most notably dysprosium and terbium have been on the rise for months.  New sources of heavy rare earths right here in the US should gain notoriety.

The Chinese could ratchet the price much higher as they have done in the past in 2010 when tensions with Japan escalated over disputed territories in the South China Seas.  These materials are crucial to some of our most richly valued large cap phone and computer stocks such as Apple (AAPL) and industrial giants like Siemens.

Increasingly these large cap giants with deep pockets should look to fund new projects which could supply them securely for a reasonable price.  However, the mine must have an adequate supply of the most critical rare earths used in permanent magnets most notably dysprosium and terbium. 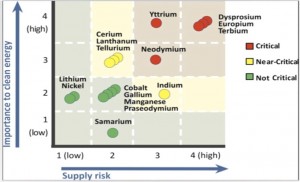 Terbium and dysprosium are two heavy rare earths that are the most critical for our latest defense technologies and the greatest of a supply risk.  This lack of a secure domestic US source for dysprosium is putting our national security at risk.

Senator Murkowski from Alaska now heads the US Senate Committee on Natural Resources and Energy.  She is well aware of this supply issue and has supported legislation aimed at securing a domestic supply of these heavy rare earths and has voiced her support for Ucore’s (UCU.V or UURAF) Heavy Rare Earth Bokan Project numerous times.

The most advanced and highest grade heavy rare earth asset in the US is located near Ketchikan, Alaska and is owned by Ucore Rare Metals (UCU.V or UURAF) who is advancing a pilot plant and bankable feasibility study on Bokan Mountain in Southeast Alaska.  Remember the Alaska Development Agency has pledged to finance the infrastructure costs on the project providing great financial support to an emerging producer. 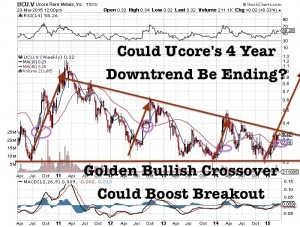 Ucore continues to outperform the busted rare earth sector by a wide margin outpacing former institutional leaders such as Molycorp (MCP) and Lynas (LYSCF).  The recent breakout above the critical 200 day moving average is exciting as that could attract even more investors.

Ucore (UCU.V or UURAF) recently released news that they secured the rights to SuperLig® Molecular Recognition Technology (MRT) which is used to separate the rare earths.  Work is underway for a fully operation Pilot Plant which should be constructed in Houston, Texas.  Even more crucial is that if the Pilot Plant is successful a joint venture will be formed that could be used by other rare earth developers for processing using this technology.