Tensions between Russia and the West continue to push precious metals higher.  Gold climbed back above the critical $1200 mark.  Once again the Greek debacle is coming back to haunt markets as investors fear another decline in the Euro.  The Dow was down over 300 points yesterday as investors are beginning to brace for uncertainty from a declining oil price pushed down to punish Putin and his friends.

As expected the end of tax loss selling should support a rally in the beaten down junior miners.  We could witness a powerful January Effect where the small caps outperform.  A break above $1240 in gold could really ignite renewed buying across the sector. 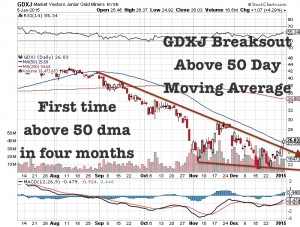 Investors should specifically watch out for breaks of critical moving averages such as the fifty day moving average (50 DMA).  A break above the line indicates a potential change in trend.  The junior gold miners (GDXJ) have broken above the 50 DMA for the first time in four months.  This means the probability of a change of trend has increased.  Confirmation of a major bottom would be a break of November highs at $30.

Now until at least March when PDAC begins in Toronto is a very favorable season to watch the junior mining stocks.  Make sure to sign up for my free 30 day trial by clicking here...

P.S.  I will be speaking at the 20th Annual Vancouver Resource Conference on January 19th, 2015 at 1PM.  The topic will be “Picking The Winners in the

Junior Mining Sector Despite The Worst Bear Market in History”.
Learn more about the event and register by clicking on the following link:
http://cambridgehouse.com/event/33/20th-anniversary-vancouver-resource-investment-conference-2015

P.P.S.  I was recently interviewed by Palisade Radio which can be seen by clicking here…

Takeaways from the interview were:

● Understanding how to measure value as an investor, why it’s crucial to not chase high valuations in the stock market

● The junior mining sector, and why it’s Jeb’s favorite investment

● Jeb’s thoughts on the uranium sector, and why smart money is investing in the “other yellow metal”