For weeks, I have been expecting a major long term bottom in the precious metals after major capitulation.  The liquidation may have occurred this week as investors sold out of panic and fear rather than take a look at the long term fundamentals.  Across the board many of the weak hands had to sell quality assets for pennies on the dollar. 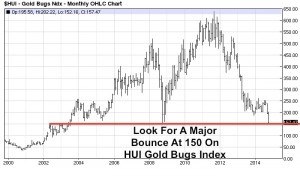 Smart resource investors expecting capitulation have had some of their bids filled at ridiculously low prices.  Fortunes are made by the brave who pick up real assets when the majority is not interested in them.   I expect a major bounce at 2008 credit crisis lows and the 2003 breakout on the HUI Gold Bugs Index at $150. 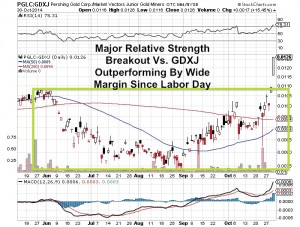 For weeks, I told my premium subscribers I was buying Pershing Gold (PGLC) at major lows at or below $.30.  I believed that the company was due to break its downtrend and 50 day moving average.  Now a few weeks later it appears Pershing has broken above the 50 day moving average and has broken out on a relative strength chart versus the Junior Gold Miner ETF (GDXJ).  See my recent article discussing Pershing by clicking here...

There has been a lot of accumulation both from insiders and smart contrarian investors as Pershing makes major advancements with regard to drilling, financing and hopefully listing on a major exchange by the end of the year.   Look at the chart below from Yahoo Finance showing the major buying by Barry Honig.

Pershing Gold's Relief Canyon asset may be in the front of the M&A queue and according to Steve Alfers the recent permitting news is a “landmark event”.  He said, "For the first time in nearly 25 years, the Relief Canyon Mine has all of the permits needed to begin mining the deposit and to operate the heap leach gold processing facilities...Now that we have all of the permits in place, we are in an ideal position to optimize our mine plan and fine-tune our processing facilities." 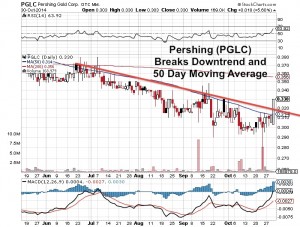 The junior gold miners are all being hit hard this week as investors fear the end of Quantitative  Easing will bring about deflation.  This irrational panic may mark a turning point.  We may see a bounce off these levels after the panic gaps down.

I feel we may be near a major turning point in the entire resource sector and I wanted to get into Pershing Gold (PGLC) a unique story in Nevada that has all the permits and a fully equipped heap leach processing facility.  Pershing  just received all the permits it needs to begin production at Relief Canyon.  In addition, they have over $20 million of cash and are actively drilling hitting impressive results.

Steve Alfers, CEO of Pershing Gold (PGLC) is well known as the former head of US operations for Franco Nevada the famous gold royalty company and the former CEO of New West who sold Long Canyon to Fronteer before being sold to Newmont for billions.  Alfers has a great track record and is an expert in mining law and deal making.

He has big plans for Pershing and has the track record to turn this $100 million company to possibly a $1 billion company.  Steve has investors with deep pockets with lots of cash behind him and could possibly acquire cash starved miners for pennies on the dollar.

In addition to having one of the best CEO’s in the junior mining business, the company has very strong shareholder support from billionaire investor Dr. Phil Frost who sold IVAX for $7.6 billion in 2005 and is in the top 200 of the richest people in America.  In addition, successful businessman Barry Honig sits on the board and is actively buying shares.  Barry has bought millions worth of stock in the market since September 1st according to insider filings which can be found by clicking here.

When you see some of the smartest value investors buying stock in a junior gold miner, it makes one question the record short on the sector.  We may soon see a major short squeeze.

Pershing Gold (PGLC) just announced a financing with some of the most active and smartest US investors and now sits with over $20 million in cash, a fully permitted heap leach facility and an expanding gold resource base in Nevada.  One of the insiders has been buying aggressively in the open markets which is a positive sign for a turn in the company.  I expect Pershing to be uplisted to a major exchange such as the NYSE or Nasdaq in the near term.  With the former Franco Nevada, Chief of US operations as its current CEO the weak junior mining environment could play into the advantage of  cash rich and deep pocketed Pershing to pick up quality mining assets at a bargain to complement near term production at Relief Canyon.

I am excited to see this company break out of its recent downtrend, get uplisted and become recognized by the institutions possibly by the end of 2014.

Disclosure: I am a shareholder and the company is a website sponsor.  Conflicts on interest apply.  Always do your own due diligence.