Chart Shows A Potential Double or Triple in the TSX Venture

Risk taking is a natural part of life, especially in the capitalist system where the greater the risk, the increased potential reward.  The TSX Venture Index which is made of the Canadian start ups in junior mining and high tech is hitting lows not seen since 2002 and the 2008 Credit Crisis.

Despite the record amount of global QE, investors are sitting in US dollars, treasuries and large caps rather than investing in new ideas especially in the resource arena.  Higher risk capital entering start ups especially in junior mining has reached a new low as investors have been seeking liquidity and dividends.

Clearly, the strong global economy purported on CNBC has not yet been reflected on the TSX Venture Exchange yet.  However, that may change over the next 3-5 years and now may be the time to buy up the best resource assets at historic lows.  Over the past decade, The TSX Venture has at least doubled or tripled from these historical low levels where it is currently trading. 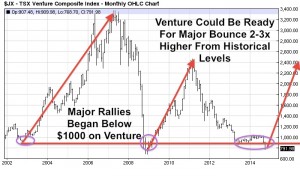 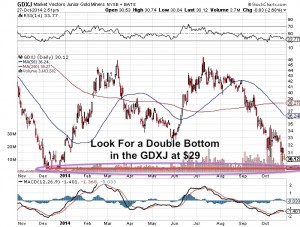 The Junior Gold Miner (GDXJ) ETF appears like it could be approaching a major bottom in the $29 zone and could form a double bottom with the December Low over the next couple of weeks.

I just returned from the New Orleans Conference where I met with management of some exciting gold companies on the verge of major gains as they reach fundamental catalysts.

1)Pershing Gold (PGLC) just announced a financing with some of the most active and smartest US investors and now sits with over $20 million in cash, a fully permitted heap leach facility and an expanding gold resource base in Nevada.  One of the insiders has been buying aggressively in the open markets which is a positive sign for a turn in the company.  I expect Pershing to be uplisted to a major exchange such as the NYSE or Nasdaq in the near term.  With the former Franco Nevada, Chief of US operations as its current CEO the weak junior mining environment could play into the advantage of  cash rich and deep pocketed Pershing to pick up quality mining assets at a bargain to complement near term production at Relief Canyon. 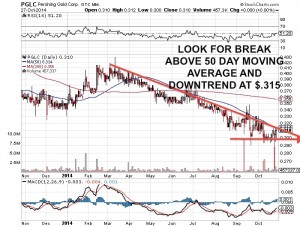 I am excited to see this company break out of its recent downtrend, get uplisted and become recognized by the institutions possibly by the end of 2014.

2)Red Eagle Mining (RD.V or RDEMF) just published a Definitive Feasibility Study showing some of the best economics in the business on their San Ramon Deposit in Colombia.  All that they are waiting for is the final environmental permit which could come soon and really boost the value of this asset.  Red Eagle has some strong shareholder support from Liberty Metals and is one permit away from building one of the world's most economic mines.  Don't think the project is toosmall, there is a lot of room for growth and was drilled in a way to get it into production the most cost effective way.  The CEO Ian Slater did an excellent job to advance this project to get to a construction decision without blowing out its share structure and minimizing dilution. 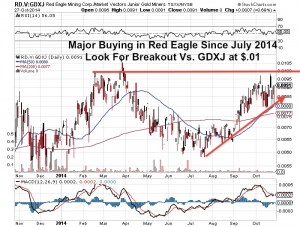 3)Canamex Resources (CSQ.V) is hitting arguably the best drill results in Nevada right now on a regular basis and have attracted investment dollars from two NYSE gold producers such as Hecla and Gold Resource Corp.  There are assays pending from both the Penelas East Discovery and historic resource area.  I first told you about Canamex back in 2013 and it is now up 130% in 2014 as they are making a great discovery in Nevada at their Bruner Project.  Canamex just announced step out drill results at the far northern end of Penelas East over 100 meters away from the nearest neighbor drill result.  They intersected 22.9 meters of 3.29 g/tonne, which means that the project remains wide open to the north.  A second core hole was drilled and intersected the high grade target.  Results should come out in early November. 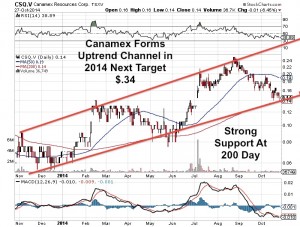 Canamex is pulling back to its 200 day moving average.  It may be a good area of support to add as it is in a strong uptrend.

Disclosure: I own all 3 companies and they are all website sponsors.  Do your own due diligence before and during your investment.