Did Tesla Choose Nevada To Be Close To This Junior Lithium Miner Up 450% in Past Year?

For years I have been bullish on the growth of the lithium-ion battery in its use in smartphones, tablets, laptops and electric vehicles. It is becoming the battery of choice as the consumer looks to power up on the go. Weeks ago I wrote about a game changing M&A event that could spark a huge rally in the lithium and graphite sector.

When Albermarle (ALB) paid $6.2 billion to buy Rockwood (ROC), the world's largest publicly traded lithium producer, I knew it was only a matter of time before our carefully selected junior miners get noticed by the smart money and large institutional funds. 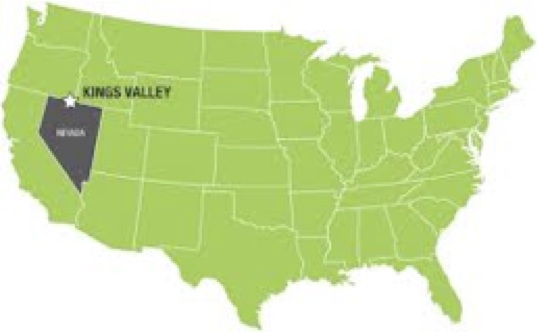 Six weeks earlier, I predicted Tesla would choose Nevada as the state for the major $5 billion battery factory because of the close proximity to Western Lithium's (WLC.TO or WLCDF) Kings Valley Lithium Deposit. This week Tesla and the State of Nevada made major announcements which should continue to spark interest in Western Lithium's large lithium resource base.

Western Lithium is beginning to hit the mainstream headlines, but in 2013 it seemed like I was the only one talking about this company when it was completely ignored. I have learned in the mining business that one must stick to their vision and be patient despite all the naysayers. Eventually, capital flows to unique and strategic assets such as Western Lithium which is up 450% over the past year. 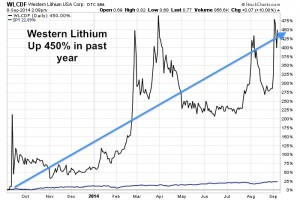 The obvious question asked when seeing a 450% gain like this is when would be a conservative time to say the company has reached fair value and to decrease exposure? I look at recent deals such as Australian Talison which was bought out by the Chinese for $625 million and feel that Western Lithium with a $100 million market cap still has room to grow. Having the lithium in Nevada gives Western Lithium a great premium for its geographical advantage.

Expect further deals to be announced in the Lithium and Graphite sector. Look at the recent news of our Big North Graphite (NRT.V) being acquired by Flinders (FDR.V). Flinders happens to have possibly the best graphite team in the business both from the finance and technical side. Throughout the 100's of graphite juniors, the world's best graphite team found our micro cap Big North Graphite which acquired the past producing El Tejon Mine in Mexico.

Western Lithium (WLC.TO or WLCDF) could be the next acquisition by one of the big boys such as a Rockwood, SQM or FMC. The company should be producing hectorate clays by November 2014. The clays are used in the fracking industry. The clay sales could provide cash flow for the lithium development.

Western Lithium continues to advance the technical work on the Lithium demonstration plant on the Kings Valley deposit clays to show the viability of producing significant amounts of lithium for the US domestic electric car market.

The company believes that planned production could meet the demand of close to 1 million electric cars. Remember Western Lithium owns inferred and historical resources that extend over 20 miles in Nevada.

Jay Chmelauskas, CEO of Western Lithium said.  “We see the potential for Nevada to become a major international hub for lithium production.  Recently announced plans to develop the world’s largest lithium-ion battery manufacturing facility within the State of Nevada, provides possible synergies between our businesses.  The State has an opportunity to capture the innovation and invention that is taking place across the lithium sector, and our demonstration plant is the next step to establish new technology and to create another significant new business in Nevada.” 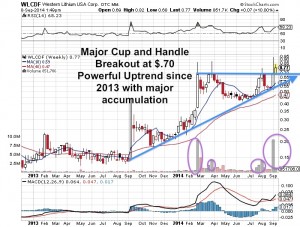 Western Lithium is on the verge of a possible cup and handle breakout.  The uptrend is strong with major accumulation in 2014.  See my recent interview with Western Lithium's CEO Jay Chmelauskas by clicking here...

Disclosure: I am a shareholder of Western Lithium and the company is a website sponsor. Be aware of any conflict of interests. Please do your own due diligence.  This is not a solicitation to buy or sell stock.  For entertainment purposes only.