Lithium and Graphite Sector is Jumpstarting With Investor Interest

Its a very exciting time for the lithium and graphite sector as Tesla announces big plans in the near term.  The announcement of a Tesla Lithium Ion Gigafactory in North America has jumpstarted the junior mining graphite and lithium sector as I discussed in this last article more than a month ago.

Look at Western Lithium, Northern Graphite, Flinders Resources and Big North Graphite which have all recently made major moves.  The lithium and graphite miners are still undervalued and the boom may be just beginning as there could be a major increase in demand for these batteries critical for cars, smartphones, tablets and laptops. The public is not yet aware about the exponential rise in demand for the lithium-ion battery sector which could more than double over the next ten years.

Big North Graphite (NRT.V) has already sold amorphous graphite in Mexico but took a huge leap forward when it acquired the El Tejon Flake Graphite Mine and Mill.   It was a past producer but shut down in 2002 when the Chinese knocked down the price of graphite.

Today Tetra Tech published a report that showed that it would cost between $2.25 and $5 million to refurbish the mill.  The full report can be found at bignorthgraphite.com which shows that the first line could come back into production at a capacity of 250 t/d in 6 months and line 2 could be operational at 500 t/d by 18 months.

Big North's management is motivated to get this asset into production and sell flake graphite.  With some updating and refurbishment, El Tejon could come back into production in a timely manner.  Being a past producer and having an established infrastructure in place is a huge benefit.

This property is the only past producer of flake graphite in Mexico.  It was originally built in 1980 by the Mexican Government.  Please note the Company has not yet completed a  NI 43-101 mining study which means a production decision entails higher economic and technical risks. 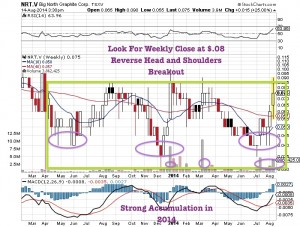 However, Big North has some experienced Directors and some strong shareholder support and Tetra Tech who completed the study is well known all over the world as a top notch independent consultant.  Big North is trading at a fraction to some of their peers in Canada and Sweden.  If management and the Board can execute over the next six months then Big North can catch up and grow to be a major player to supply graphite for the growing battery market in North America.

Disclosure: I am a shareholder of Big North Graphite.