While the media dazzles you with the money being made in high flying overvalued social media stocks, behind the scenes China is buying up North American energy resources and one of the beneficiaries has been Western Canada.  Currently, there is an explosion of economic growth in Western Canada most notably Alberta.  Due to the increased demand for energy coming from Asia, Western Canada may be one of the best economies in the world right now.  Unemployed Americans and Europeans with technical skills are already finding high paying jobs.  Alberta's economy based on oil and gas is one of the strongest with a low unemployment rate and over 3% real GDP growth. 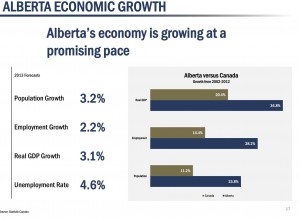 Over the next few years, hundreds of billions of dollars will be invested to build LNG facilities and major pipelines in Western Canada in order to transport petroleum to the emerging economies in Asia.  There are already five major pipeline proposals. 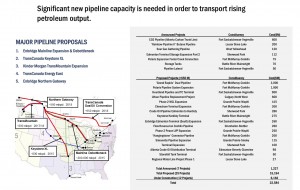 In addition, see all of the proposed LNG facilities and pipelines that should be built over the next decade.

The weak Canadian currency combined with the rising demand for electricity and automobiles in emerging Asian nations could continue to support a major boom for this region.

CNOOC, China's biggest oil and gas producer, paid $15 billion to buy Canada's Nexen in early 2013.  Nexen has given CNOOC control of billions of barrels of Canadian oil sands in Alberta.

Chinese investment in the region is exploding as CNOOC is now proposing the construction of a liquefied natural gas (LNG) plant in British Columbia.  Natural gas is much more expensive in Asia then in North America as demand is soaring.

This terminal would cut down on costs and help CNOOC boost its Canadian oil business which they are investing billions of dollars.  In addition, Exxon Mobil, the largest publicly traded energy company is also looking to build a LNG plant in British Columbia to export gas from Western Canada.

These combined plants could cost tens of billions of dollars over the next decade to build.  Western Canada is beginning to see a boom from LNG and oil sands projects as investment from China into the region is exploding.

I have been looking for undervalued public companies that are taking advantage of this major build out in Western Canada.  I have found one company which should be considered by my subscribers.  Enterprise Group (E.TO or ETOLF) has had a phenomenal year making several strategic acquisitions in the area of construction, infrastructure and energy.  Enterprise bought a tunneling company which clears the way for pipes to run underground highways, trains or bodies of water.  There are great margins in that business as there are very few competitors and increasing demand.

Enterprise has made a major run in 2013, but this may be just the beginning as some of the analysts that follow it says it is way undervalued and have targets of above $2.

Enterprise announced its 3rd quarter results which showed the reason why management acquired these strategic businesses.  The company announced strong revenues, earnings per share and tens of millions of dollars worth of projects awarded with one of North America's largest pipeline company and one of Canada's largest railroad companies.

Enterprise is getting known for the quality of their work.  Calgary Tunnel has been awarded the 2012 Safety Award by the Alberta Builders Association in recognition of the largest employer to achieve zero lost time claims.  Enterprise prides itself on it safety, customer service, and great performance in difficult working conditions.

Enterprise Group (E.TO or ETOLF) announced their intention to become a reporting issuer in the United States, which means that the company may be just beginning to attract a larger audience.  When the company becomes registered with the SEC and reports through EDGAR more US analysts, brokers and financial institutions will become aware and have greater awareness of this unique company benefitting off the energy rebound in Western Canada.

Management and insiders have put their money where their mouth is and currently own around 30% of the shares outstanding.  With a PE of under 9, impressive revenue growth and the companies ability to build a presence in an exciting growth industry in Western Canada, I believe the $2.05 target by M Partners is reasonable in 2014.  This would be about a 166% potential return for current purchasers over the next year.  The company and the business activity in the region is just beginning to get noticed by the investment community. 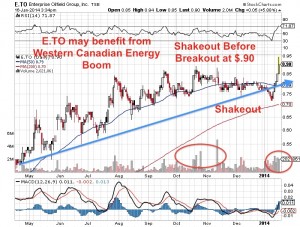 Enterprise is on the verge of its next breakout at $.89 after the closure of its most recent acquisition.  The stock currently sports a return of equity of 39% and revenue of around $30 million.  They want to grow revenue to $150 million annually by the end of 2015.  With the current market cap around $74 million a double over the next 24 months could be considered a conservative target.

Enterprise may be one of the best performers in 2013 and may be just beginning a major growth period in 2014.  Listen to my recent interview with Enterprise Co-Founder Desmond O’Kell by clicking here... We discuss the breakout third quarter and goals for 2014.

Disclosure: Enterprise is a sponsor on my website and I own ETOLF.