For many months, I have alerted you that capital will flow from bonds/equities/fiat currencies into precious metals, commodities and junior mining stocks as we begin to enter the inflationary cycle which historically follows deflations.  Central Banks are fighting economic contractions with quantitative easing which they are reluctant to end.  Our metal and mining sectors have been leading the markets over the past three months.  Most notably the rare earths have been one area seeing major volume and accumulation as well as oil which despite the lack of Western Intervention in Syria remains above $100.    Crude oil has broken above the $100 mark and is on the verge of a major multi-year breakout which could send the price soaring to breakthrough all time highs. 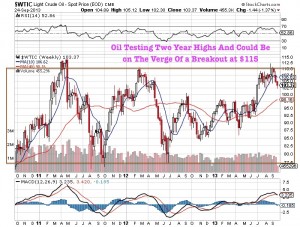 Gold and silver look very strong as the technicals improve daily and as it forms a rising bottom off of June lows.  Don't be unsettled about this recent pullback which I expected at the end ou August.  This may become one of the strongest upturns in the precious metals, energy and mining sector since the beginning of the 2011 deflation.  The chances of total chaos in the Middle East are rising, as the World does not want to get involved with Syria and their major supporter Iran. We are now leaving the responsibility to Russia to watch over the region.

Currencies are declining rapidly most notably in India, Turkey and Brazil.  Hyper-inflation may start rearing its ugly head like I predicted many months ago.  The U.S. dollar is also looking like it is on the brink of a major decline to break 2012 lows as it breaks down from a bearish rising wedge. 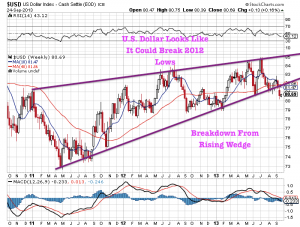 The base building of the past two years could lead to an extended move in the commodities, mining and precious metals sector as it is historically undervalued compared to the overall equity market.  Growth looks like it is expanding in Europe, China and the U.S. from all the easy money policies.

Bonds look ugly and equity investors are becoming increasingly concerned about inflation.  China demand for commodities is rising as their manufacturing numbers increase and they have large bond and dollar positions which are at risk of declining.  I personally have had many Chinese investors ask about North American mining assets. China is one of the world's largest consumer of metals, coal and uranium and they need vehicles to diversify away from the dollar and bonds.

I am not convinced that the situation in the Middle East has been solved.  Violence could escalate in the region.  Notice the recent terrorist attack in Kenya.  There are many forces that could drive oil into new highs.  Momentum players may soon run into the commodity sector.  Hedge Funds who may have been short are now covering and should go long.

That is why I may have been early on looking into the coal sector which has been one of the worst performers during this commodity correction and may actually rebound the fastest if there is a turn in commodities.  Sometimes the area that goes down the most in the previous down cycle, outperforms in the coming upturn.

No sector other than uranium and potash has been so punished by the media as coal has.  Coal stock prices are down since 2011.  Peabody Energy, the largest publicly trading coal company is one of the worst performers in the S&P500, as coal has been lumped in with other dying industries.

However, the reality is coal is not going away so fast.  As the commodities rebound and as demand rises look for coal stocks to recover impressively possibly breaking through the two year downtrend.  A modest economic upturn combined with oil supply risks could really spark a nice rally in this forgotten sector as many producing mines were shut down over the past few years affecting supply. 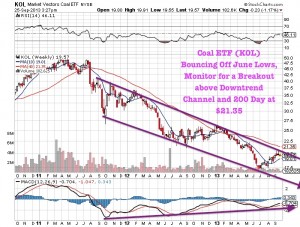 Purportedly, cheap and abundant natural gas would replace coal.  Already natural gas has doubled off $2 lows, proving it is not as stable as many pundits believed.  It is important to note that in emerging markets, natural gas prices are almost seven times higher than in the United States.  In addition, oil is still holding the $100 mark as the markets are still concerned about the Middle East.

Demand for coal is rising globally as emerging markets continue to build infrastructure and need cheap sources of energy.  Over the longer term pricing for coal should rise.  Do not be surprised to start seeing capital reentering the coal sector.

Remember all commodities especially coal are highly cyclical and the best times to buy these stocks are when the public sentiment is negative and the mass psychology is downcast on the space.  When M&A increases and coal stocks are trading at high multiples leading the S&P 500, then it may be a more propitious time to sell.

Coal investors should look for the companies with the higher quality coals that will meet EPA standards with low sulfur and ash content as they receive premium pricing.  I may have been early highlighting this sector a few months ago, but now some major banks are turning bullish on the space as they forecast a shortfall as demand picks up in the fourth quarter of this year.

Look for prices for coal to move higher.  China demand for both thermal and metallurgical coal is picking up and is up considerably from 2012.  Long term demand for coal will rise especially from emerging markets such as India and China according to the U.S. Energy Information Administration.

Don't be surprised to see coal stocks double over the next year as oil and natural gas prices rise to new highs.  Even though Obama pledged to cut greenhouse gas emission and directed the Environmental Protection Agency to create new standards for the coal industry it will take many years to implement as lawsuits combined with political backlash is likely.  Remember there are large populations within the U.S. who make their livelihood off of the coal industry.

Rising electricity from increased oil and gas prices could push utilities and consumers to look to cheaper coal which produces close to 40% of the U.S. power supply.

I believe the coal sector may be reaching a major bottom and coal stocks could make a major rebound as earnings and cash flow improve.  If one wants to speculate on a coal rebound they can buy a Coal ETF (KOL) to diversify their risk or they can stick to some of the larger caps such as Peabody Enegy (BTU) or Consol Energy (CNX) which have dividends.

If you are looking for potential gains and leverage, one of the smaller producers in which I am a shareholder and is a sponsor on my website is Canam Coal (COE.V or COECF).  I visited the properties in April in Alabama. 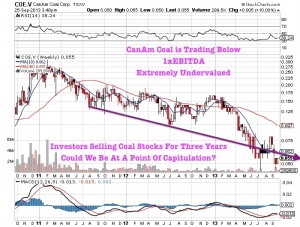 Canam Coal just came out with their second quarter numbers recently which I believe are very significant.  The company has transitioned to a steady state of production which should produce 60 to 80k tons of coal on a monthly basis going into the second half of 2013.

The balance sheet is improving with operating cash flow five times better than the prior year.  Free cash flow is turning positive from negative and should increase over the second half of 2013 into 2014.

All of Canam's new coal mines have opened and are operating near planned efficiency.  This past July was a record month of production as it sold 67,500 tons of coal.  According to the company, they can sustain this rate for the foreseeable future.  No new equipment is needed in the near term which reduces expenditures. 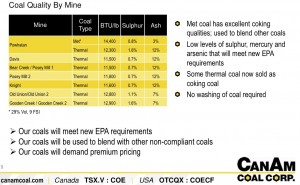 All of CanAm's 2013 production is sold out and a majority of 2014 production has been sold as off-take.  This may be due to CanAm's low sulfur and ash coal profile which receive premium pricing and meet the EPA's standards.  I expect CanAm to generate increasing free cash flow over the coming months and to gain recognition by the investment community.

Listen to my recent interview with CanAm Coal CEO Jos Desmedt by clicking here.   We discuss the coal sector and why CanAm with their high quality coals could be positioned for great growth in the coming quarters.