Are the Uranium, Graphite and Rare Earth Miners Ready To Breakout?

I have been carefully scouring the resource markets for exceptional opportunities over the past few months and indicated numerous times about the potential rebound and breakout in uranium, graphite, PGM's and rare earth mining stocks. At the end of October, I said to watch for a rebound in uranium as major volume accumulated shares of Uranium Participation Corp which has now just broken out into new nine month highs and made a bullish golden crossover of the 50 and 200 day moving average. 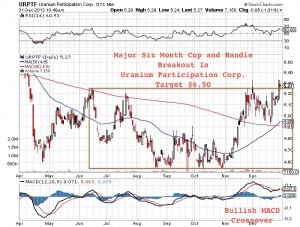 I also told you about increased M&A in the rare earths and graphite sector.  Now Molycorp has just broken out on huge volume as even this giant could be a takeout target of Molymet as it trades below book value.

In addition, I highlighted a few months ago to buy NYSE graphite bellwether Graftech and some of the high quality graphite miners.  I wrote in this article published back in November about getting ready for a rebound in graphite, "I recently highlighted Graftech (GTI) in early October and believed the stock was about to make a major move as it was trading below book value. At that time, Graftech's market cap was below its revenue which signaled an excellent value play. Since that time Graftech has soared over 40% while the S&P500 has gained under 7%...Some of the more advanced junior graphite miners which may benefit from this upturn is Flinders Resources (OTCPK:FLNXF), Focus Graphite (OTCQX:FCSMF) and Northern Graphite (OTCQX:NGPHF)."

All these graphite stocks mentioned above have been breaking out on major volume this week as predicted. The catalyst may have been the Chinese off take announced with Focus Graphite on its Quebec Lac Knife Deposit. This is the first major off-take agreement in the graphite sector and it comes from China the largest exporter of graphite. This indicates to the markets what I have been saying for years that China is looking to import graphite over the longer term and Western graphite assets are in demand.

For a couple of years now, I have been writing about the critical supply of minerals which are crucial for North America's basic industrial manufacturers.  The EU and the US have named graphite a critical material as demand is rising in the use of green energy. 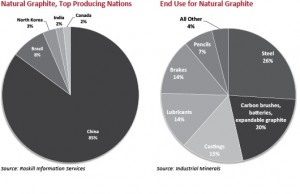 China produces over 70% of the world's graphite and has been tightening exports of the vital mineral for years.  Prices have soared exponentially.  Manufacturers are worried about supply as Li-Ion batteries actually require more graphite than lithium.  Maybe they should be called Li-Graphite Batteries.

There is a race to be able to supply graphite in North America.

I told you to monitor the graphite bellwethers and issued a buy alert on Graftech in late October as I believed it was on the verge of a bullish reversal and I was right. 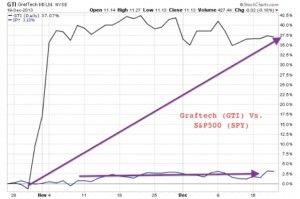 The stock has made a significant rebound posting gains for my subscribers during a tough year in the resource markets.  I also told you about Big North Graphite (NRT.V) before it actually made graphite sales in Mexico in August of 2013.

Big North just announced a Letter of Intent (LOI) to buy a Flake Graphite Mine in Mexico.  According to the Press Release the property is the "only flake graphite mine to have produced in Mexico."  There is a mill there as well.  Big North also announced the addition of Cesar Guajardo to the Board of Directors.  Cesar has over forty years of experience in the industrial minerals business in Mexico specifically all aspects of the graphite business.  According to CEO Spiro Kletas, " Mr. Guajardo brings a wealth of expertise and worldwide contacts in the graphite market to Big North."

Big North (NRT.V) is one of the first movers I know of in the junior graphite industry and they believe this asset has near term production capability as it was a past producer.  This first to production status would give Big North an advantage to possibly secure end user agreements for both their amorphous graphite and large flake graphite to different North American consumers.

Having a secure supply in the near term is critical to domestic industries in Mexico and the United States.  Big North has been one of the few juniors making major advancements during this difficult resource market partially due to some major supporters as there has been major accumulation in 2012 and 2013. 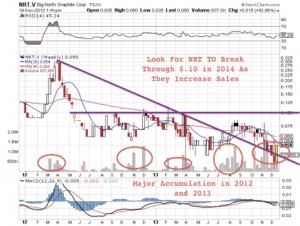 Surprisingly, the stock recently traded around a nickel despite making consecutive month of sales and showing major accumulation over the past few months.  Big volume is entering which may indicate that major investors may be positioning themselves in this situation.  It may be undervalued in the junior space as it is actually making sales and advancing projects which could be the first to production.

Disclosure: I own Big North and they are a sponsor on my website.