For more than a year and a half I have been investing and following the graphite sector, as I believe there is incredible growth in this material over the longer term as it's use in our latest technologies has risen exponentially in the past decade.  Graphite's use is growing in high tech materials used in smartphones, jets, high efficiency lighting and steelmaking. 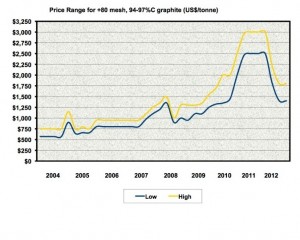 I first highlighted graphite before its major run in 2012, where some of my recommendations quadrupled only to fall back below the original prices.  I may have been early as graphite prices have pulled back.  Nevertheless, the potential for capital gains in graphite is even greater now than ever before.

Take a look at Graftech (GTI), which is one of the world's largest manufacturers and providers of high quality natural and synthetic-graphite products.  The chart appears like it may be on the verge of reversing higher.  This could be due to the steelmakers increasing output as demand is rising for automobiles and construction materials. 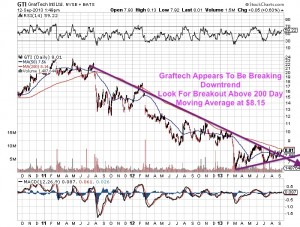 The graphite stocks could not defy gravity in 2012 and 2013 as the weak overall global economy and resource market eventually brought the entire materials sector down, but many are beginning to see signs of a bullish turnaround. We may witness a reversal in the TSX Venture and demand for industrial graphite could explode once again as automobile sales, construction and infrastructure projects begin to pick up.  China is also looking much stronger than many analysts predicted and is breaking into new highs.  Despite the Syrian compromise with Russia oil is stubbornly staying above $105.

Talks of taper are a result of the realization the economy may be moving into an expansionary phase.  This should boost the steelmakers who desperately need graphite which is labeled a critical material in short supply by the U.S., EU and Chinese Governments.  The U.S. is completely reliant on graphite imports for its domestic industries.

Most of the supply comes from China which is a concern for domestic industries as they need secure supplies.  China has already claimed they need the graphite and rare earths for their own industries.  There is a case with China and Western nation at the World Trade Organization over raw material exports and China using their own natural resources to their advantage.

One junior graphite miner that I have recently discovered is Big North Graphite (NRT.V) which just announced its first two sales of graphite after recent successful test mining. This is significant news as the company sold its first shipment of 200 metric tones of amorphous graphite from its Nuevo San Pedro Mine to a willing buyer in August and just announced its second sale of 238 tons.  Management and insiders have skin in the game and control an impressive 25% of the approximately 83.5 million shares outstanding. 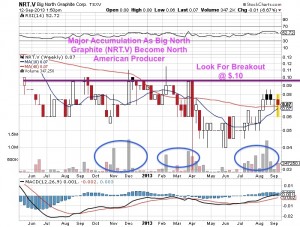 To find a junior graphite miner trading below $.10, making sales which could soon produce revenues and cash flow is truly impressive. Many are unaware of this undervalued situation that could make major gains as the investment community realizes the potential here in producing free cash flow and expanding their graphite production.

Being one of the first publicly traded companies in production of graphite is a huge advantage as there is currently little to no competition. Customers can buy graphite from Big North to diversify out of China for two major reasons, security of supply and security of transportation.

Shipping from China is very expensive, time consuming and there is a risk the Suez Canal or Strait of Hormuz could be closed. This could create a major bottleneck of supply. Plus many companies want a secure supply from a different jurisdiction.
Big North's graphite can be driven into the Southern part of the U.S. within 12 hours at a fraction of the cost.

This is why I am so excited by the potential of a small cap junior acquiring an asset and producing revenue within a 12-18 month timeframe. This rapid advancement to selling graphite within 12 months of acquiring an asset speaks wonders of the management team.

Sales are starting which should help the balance sheet with increasing revenues. This could eventually lead to free positive cash flow and could put Big North in a position to replicate this model by expanding production with additional mines.

Cash flow is critical in any business especially graphite which is a race to the finish line. Big North could one day be a cash flowing bigger Big North possibly within the next few quarters. Graphite demand is increasing and supply could be increasingly constrained from China.  A rare producing graphite company in North America like Big North could gain much more awareness in the coming months especially if the automobile and construction sector continue to trend higher.

I spoke with the Big North CEO Spiro Kletas several weeks ago and we had a discussion about Big North which I would like you to listen to by watching the video below.

Big North wanted to be one of the first junior graphite producers earning revenue and selling graphite. The recent announcements that they sold graphite for two months may demonstrate to the investor that amorphous graphite demand is strong.  Big North Graphite (NRT.V) could soon gain market recognition and see further sales agreements or off-takes. This could cause a breakout above $.10 sooner rather than later. I could see a possible home run if the venture market continues to turn bullish and as investors look for cash flowing juniors in the mining space.

Disclosure: Author is long Big North Graphite and Company is a sponsor on website.