In early 2012, the burgeoning graphite sector gained attention from investors all over the world.  It has recently fallen out of favor due to the global economic uncertainty.  Despite this setback, the fundamentals show that graphite demand is being driven by the increasing use in the latest clean energy technologies such as the Lithium-Ion Battery, Fuel Cells, The Pebble Bed Nuclear Reactors and Vanadium-Redox Batteries critical for green energy, wind turbines and solar cells.  The underlying price of graphite remains high and demand is rising seeking out new supplies. 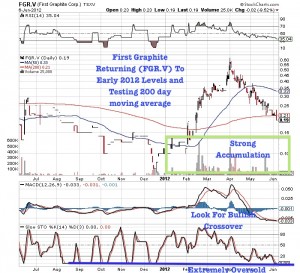 One early stage company we are closely following is First Graphite (FGR.V)  who recently acquired the historic Henry Project in Saskatchewan, which is close to Noble Bay Mining's and Strike Graphite's Deep Bay Projects.
This project has had work done on it for several decades and it is known that there is about 30 meters of graphite content.

However, the graphite was never developed due to cheap Chinese exports and low prices.

The First Graphite team has been diligently working to acquire quality large flake graphite projects with the Zimtu Capital (ZC.V)team.  Zimtu is one of the early pioneers in the graphite space and is way ahead of the curve researching prospective projects for emerging graphite companies.
First Graphite is going to begin a electromagnetic survey that will examine the entire project and update the findings that were done decades ago. The results from this survey should be released soon.  They are doing all the preparations which are needed to begin an exploratory drill program in the third quarter of 2012.

The company feels that the Henry Project could rival nearby Deep Bay West which has a non 43-101 resource of 1.8 million tons with a grade of 10.32%.  First Graphite feels confident that they will bring a major graphite discovery to the market in the near term and believe the Henry Project has significant upside potential.

The Project has two major highways and a railroad within 10 kilometers.  First Graphite has an excellent share structure with less than 20 million shares outstanding and a very strong management team with the financial capacity to aggressively explore these projects and acquire additional advanced graphite projects in Canada that is near existing infrastructure.

Watch my recent interview with management.

The graphite sector appears to be giving investors who missed out on the first run a second chance to acquire cheap shares at  ground floor prices.  There is increasing talk of an additional round of quantitative easing, China has lowered interest rates for the first time in three years, and Europe is about to bailout Greece and Spain.  All these factors will benefit industrial metals especially the ones that are already in a supply shortfall such as large flake, high purity graphite.