Graphite is gaining investor’s interest as it is one of the few sectors in the natural resource space which has been outperforming the S&P 500.  The S&P 500 has been hitting new highs while the Canadian Venture Index is hitting new lows.  In 2012, graphite has been one of the exceptions rising in a down market.  Graphite stocks have hit new highs and have recently pulled back, while gold and silver miners have hit 2 year lows.  This demonstrates excellent relative strength in an overall weak natural resource equity environment.

Why are graphite stocks outperforming?  Global demand for graphite is expected to increase exponentially over the next few years.  Rapid adoption of smart phones, laptops, hybrid-electric cars is fueling the demand for lithium ion batteries.  Each electric and hybrid car requires over forty pounds of graphite.

There are not many graphite mines outside of China.  Large economic deposits are rare and right now most operating mines in North America are small.  We could see the need for 30-40 new graphite mines over the next decade.

Most of the supply comes from China which produces about three quarters of the world’s graphite.  Similar to other strategic industrial metals, China is increasingly cutting back on exports and looking overseas for large flake graphite as they need the material for their own manufacturing sector.  They have added tariffs on graphite exports. For this reason both the European Union and the U.S. have classified graphite as a strategic mineral.

For several weeks we have highlighted Standard Graphite (SGH.V) to outperform some of its more advanced competitors as the company provides excellent leverage to the rising price of graphite as it is focussed on exploration.  Unlike other commodities, graphite exploration is cheap as it shows up easily on electromagnetic surveys due to its properties of being a great electrical and heat conductor.  Most large flake graphite mines show up at surface and does not require capital intensive deep drilling exploration programs.  The timeline to production from discovery is significantly quicker than rare earths, uranium or precious metals.  This offers an excellent advantage to companies looking to acquire and develop potential graphitic properties.

Standard Graphite has 12 graphite projects in Quebec and Ontario.  One of their key players is Antoine Fournier who has over 20 years of graphite exploration experience including being involved in the advanced stage Lac Knife Graphite Discovery.  Another significant appointment was announced recently with the addition of Mr. Gascon who will be specializing in marketing and sales expertise.

Unlike precious and industrial metals, graphite miners must negotiate with industrial end users.  Mr. Gascon was President of Stratmin Graphite.  Stratmin owned one of North America’s only producing graphite mines.

Standard has a very experienced team with specific graphite experience whose goal is to create a producing large flake economic graphite mine.

The graphite boom may be just beginning.   Standard Graphite doubled and has since pulled back to our buypoint.  We wrote in early April after the price shot up that we may witness a healthy consolidation after this powerful upward move.  We have welcomed a healthy pullback for reentry points or for new purchases.

Recently Standard Graphite had excellent results from their properties in Ontario specifically the Little Bryan and Black Donald Properties.  We hope for similar results from Quebec, where it has just been announced that they acquired additional properties.

Standard announced that it has successfully signed a Definitive Agreement for the acquisition of the Mousseau East Deposit. The new property is located within 50 kilometres of Timcal Canada Inc.'s producing Lac-des-Iles Graphite Mine.

Chris Bogart, President and CEO comments: "We are extremely pleased, having achieved this important milestone. This most recent acquisition advances Standard into a different category and brings the Company one step closer to production".

Benoît Gascon, Senior Vice-President, Business Development, further adds: "Given the amount of work done on it by Graphicor, a then graphite producer, and my knowledge of the market and the industry, I have a high level of confidence in its potential to provide graphite products suitable to meet the current and future requirements of the market." 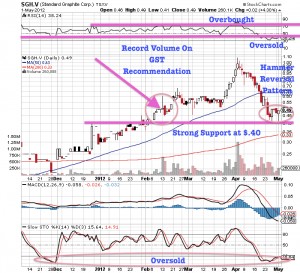 Standard Graphite made a bullish engulfing reversal yesterday on moderate volume.  This was the first bullish day after four consecutive weekly declines.  It has pulled back to our February 13th buy point and showing strong support at $.40.  It is reaching a record oversold position giving investors an opportunity to possibly jump on board an exciting sector just beginning to be understood.

At the end of last month we saw a large increase in investment interest in the graphite space with the largest volume since our 2-13-12 report.  Since that time other newsletter writers have also been highlighting this small sector causing a short term overbought condition.  We saw an accelerated move to $1 on record volume where we began to see some healthy profit taking.  Now we are reaching record oversold positions and witnessing daily hammer reversals indicating that the correction may be over.

Listen to my interview with Chris Bogart, CEO of Standard Graphite discussing recent developments and goals in 2012.

Another interesting graphite company, which has recently come across our radar that we will begin to highlight is First Graphite (FGR.V).  First Graphite recently acquired the historic Henry Project in Saskatchewan, which is close to Noble Bay Mining’s and Strike Graphite’s Deep Bay Projects.

This project has had work done on it for several decades and it is known that there is about 30 meters of graphite content.  However, the graphite was never developed due to cheap Chinese exports and low prices.

We don’t live in the 1970’s anymore and the times have been changing.  Prices for large flake graphite is increasing exponentially and there needs to be additional supply outside of China in the near term.  China has restricted exports and are already in deficit of the large flake graphite, which they hardly produce.

The First Graphite team has been working diligently to acquire quality large flake graphite projects with the Zimtu Capital (ZC.V)team.  Zimtu is one of the early pioneers in the graphite space and are way ahead of the curve researching prospective projects for emerging graphite companies.

First Graphite is going to begin a survey that will examine the entire project and update the findings that were done decades ago.  First Graphite is doing all the preparations which are needed to begin an exploratory drill program in the third quarter of 2012.

The company feels that the Henry Project could rival nearby Deep Bay West which has a non 43-101 resource of 1.8 million tons with a grade of 10.32%.  First Graphite feels confident that they will bring a major graphite discovery to the market in the near term and believe the Henry Project has significant upside potential.

First Graphite’s Henry Project has two major highways and a railroad within 10 kilometers.  First Graphite has an excellent share structure with less than 20 million shares outstanding and a very strong management team with the financial capacity to aggressively explore these projects and acquire additional advanced graphite projects in Canada that is near existing infrastructure.

We observed a very exciting move in graphite in the beginning of the year and over the past few weeks in April the first correction.  Some investors may have felt that they missed the boat on the first run up in prices.  Now with this recent correction we may witness a new wave of participants who have been waiting on the sidelines to jump on board as prices pull back to support.  The decreasing volume in First Graphite appears to show that the profit taking is waning reaching an oversold condition. 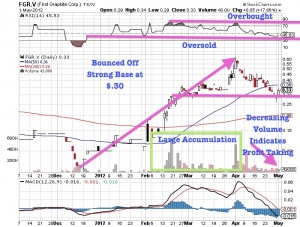 Notice the large volume accumulation in Standard and First Graphite at a time when the Venture is reaching record lows versus the S&P 500.  This may be a signal that the graphite sector is just beginning to take off attracting smart money at an early stage.

Eventually, Standard and First Graphite may draw the interest from end users as they realize the growing importance of graphite for clean energy applications and the hunger for additional supply in the West.  Standard and First Graphite may provide significant leverage to the rising price of graphite through their aggressive exploration programs and project acquisitions.  Stay tuned to my premium updates on developments in the graphite sector.