Vancouver, BC - August 2, 2012 - Standard Graphite Corp. (TSXV: SGH) (the "Company") is pleased to announce that the results from an airborne geophysical survey flown over its Mousseau East property coincide with the outline of the known mineralization. The survey has also identified targets in other sectors of the property where no historical work has been reported.

Airborne magnetic (MAG) and time domain electromagnetic (TDEM) surveys were flown by Prospectair Geosurveys over the Mousseau East property during the month of June to precisely locate the conductors associated with the graphite-bearing units in preparation for the field program (see press release 21 July, 2012). Results clearly outline the main Mousseau East zone where a historical resource has previously been outlined and also traces the along-strike extension towards the west. The extension of the main zone will be targeted for resource expansion during the upcoming diamond drilling program scheduled to commence soon.

During the survey, some conductors were also reported outside of the known mineralized area and its direct extension, notably towards the east of Oat Lake. These conductors are currently being investigated for graphite outcropping by Standard's field team. 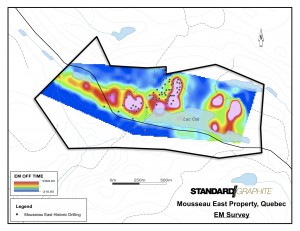 Chris Bogart, President and CEO comments on the progress at Mousseau East: "The geophysics has proven its efficiency at outlining the known graphite zones at our historic Mousseau deposit. We are excited at the prospect of expanding our current historic resource both along-strike and at depth and potentially discovering new zones as suggested by the TDEM survey."

Antoine Fournier P. Geo., manages Standard's exploration and development programs and is the Qualified Person as defined by National Instrument 43-101. He supervised the preparation of the technical information in this release.