Why Graphite Stocks May Continue To Outperform In 2012

Carbon wears many faces.  It ranges in form from precious diamonds such as Elizabeth Taylor’s Hope Diamond to electrolytic anodes found in the new generation of batteries.  The word graphite originates from the Greek meaning to write.

Now we see that graphite isn’t just found in pencils anymore.  Graphite is rapidly earning a new recognition as a component in the latest clean energy technologies such as the Lithium-Ion Battery, Fuel Cells, The Pebble Bed Nuclear Reactors and Vanadium-Redox Batteries critical for green energy, wind turbines and solar cells. 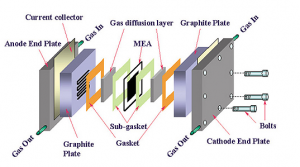 The price has risen from $500 a ton to $2500 a ton for large flake graphite.  The price of graphite has held up over the past few years despite global financial instability.

Growing Disparity Between Supply and Demand

This may be indicating the growing disparity between supply which is dominated by China and demand from Western End-Users.  The rising technological need for this special metal coupled with the lack of new discoveries outside of China is putting upward pressure on prices. 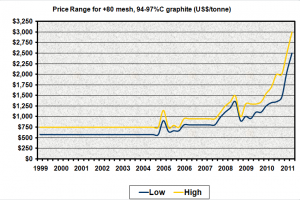 As graphite becomes increasingly important in the new world of technology, the entire sector is beginning to stir especially in energy applications such as fuel cells, lithium ion batteries and nuclear reactors. 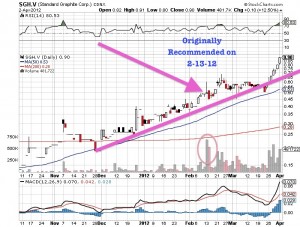 Today Gold Stock Trades focusses on a company we believe will grow increasingly important based on the following considerations: In 2011, it acquired twelve significant graphitic properties in Quebec and Ontario as well as a brand new name-Standard Graphite Corporation(SGH:TSXV).

The historic price range is a low from $.12 to $.89 which is a new high and appears to be in a strong uptrend.  We originally highlighted this company to our premium subscribers on February 13, 2012 when the company traded record volume and when we became "one of the first graphite bugs."

Gold Stock Trades has been attracted to Standard Graphite as these exploratory projects are in areas which contain the large flake, high purity deposits and are strategic in containing the characteristics for a major graphite discovery.

North American exploration for graphite has been shelved for nearly thirty years as the fine hand of China has dominated the supply/demand equation.  There needs to be new deposits discovered which are closer to home.  There is a paucity of companies that have a shot at producing North American graphite.

Standard Graphite may be undervalued as compared to some of their more advanced and more highly priced peers which are trading at much higher multiples.  As a new entrant in this rising sector, Standard Graphite provides leverage to exploration as it only has 22 million shares outstanding.

The company holds another ace up its sleeve in the form of a geologist with an impressive record.  His name is Antoine Fournier who has an impressive history of at least twenty years in discovering graphitic properties.

He was instrumental in discovering the Lac Knife Graphite Deposit which is an integral component of Focus Metals and is richly priced at these levels trading at almost ten times the value of Standard Graphite.

He now brings his vast knowledge in graphite deposits and dossier of other potential assets to SGH where he is major player on the management team.

Here is the kicker: graphite contains electro-magnetic (EM) properties which can be surveyed inexpensively from the air.  Unlike gold and silver exploration, the search for graphite does not involve excessive costs.

Let us now address some of the aforementioned acquired properties.  The first asset on stage is the Black Donald Property which envelopes one of the largest and richest graphite deposits in North America.  Management believes that Black Donald along with other projects could rival the graphite deposits by Northern Graphite and Ontario Graphite.  SGH recently announced excellent EM results from this Black Donald property.

Chris Bogart, President and CEO states: “Standard is excited about ... our excellent EM results. The project is now consolidated and the company is confident that this survey has greatly improved our ability to prioritize targets. We can now start the implementation of the next phase of work, a field reconnaissance program scheduled for April, 2012″. 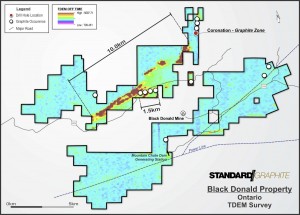 At this very moment, there is an ongoing airborne surveys on their properties in Quebec which soon should be published and according to the company will form the “backbone of the upcoming exploration program” of Standard Graphite.

In Quebec, Standard Graphite owns significant properties, some of which are proximal to proven existing known graphite mines that have strikingly similar geological characteristics.

In conclusion, Standard Graphite may present a ground floor opportunity to capitalize on the increasingly popular area of graphite mining.  There should be a plethora of positive announcements in the upcoming one or two quarters as Standard Graphite becomes a growing player in this rising sector which is hungry for new discoveries.

To learn more about new graphite companies capitalizing on the rebirth of this sector click here... and sign up for my free newsletter.