Could We Be Witnessing The Bottom In Potash Stocks?

Shipping stocks and industrial commodities are rising as China is coming out with manufacturing data that is surprisingly showing growth and rising iron ore imports. The Federal Reserve Bank may make a dovish statement keeping QE to infinity intact for some time until unemployment improves or the inflation rate moves higher at the Fed meeting next week.  Taper may be tabled for the time being.

Low inflation poses a significant risk and The Fed will do whatever they can to devalue the dollar to pay down record debts and to keep pace with declining fiat currencies in emerging economies.  Most notably keep an eye on one of the largest gold consuming countries. India's rupee is breaking into new lows as gold and silver reach record heights.  This continues to prove our thesis that the markets are moving into an expansionary phase that will favor commodities and precious metals.

Gold and silver appear to have broken a major downtrend and the 50 day moving average to the upside.   The 50 day is sloping higher and should provide support providing additional buying opportunities.  I believe gold and silver are ready to reverse higher above the 200 day moving average after being beaten down so much over the past two years.  I am constantly seeing some key gold and silver miners in mining friendly jurisdictions making bullish reversals breaking out above the 200 day and appear to be jumping out of long bases.

For some time I wrote about a potential reversal in junior potash miners as demand continues to rise for a secure supply of fertilizer to boost yields on crops.  Recently, we have witnessed a major increase of investments from India and China to become shareholders in junior miners.   BHP and K+S were set to start building new potash mines.  Then all of a sudden out of nowhere, we get suckered punch.  We see a threat by the Russian cartel to breakup and flood the market with cheap potash.  The short positions exponentially increase and we see banks publish reports calling the end to the potash sector.

This may be an irrational panic in potash stocks that may provide a buying opportunity to long term, contrarian investors.  OAO Uralkali, announced last month that they will boost production to full capacity in an attempt to break away from the cartel.   Uralkali could put pressure on pricing and gain some market share in the short term, but negotiations should be short lived as both sides will not destroy each other.

The major potash miners such as Potash Corp (POT) and Mosaic (MOS) were sold off as investors believed this could impact profits and margins with a major gap lower.  Many of the junior miners were hit incredibly hard as panic selling and capitulation hit the sector.  However, smart money may be adding to their positions and the gap may begin to be closed to the upside. Remember these large potash producers have cash flow and an impressive dividend. 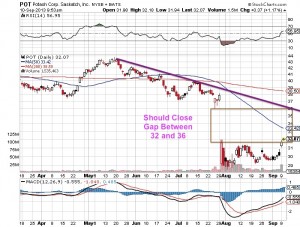 Uralkali’s attempted move to undercut its competitors may be a negotiating tactic or an attempt to prevent other miners from constructing a project.  Remember this is a duopoly and they will do whatever they can to prevent additional players from entering the fray.

I am very careful of planted stories in the media and the shorts who profit on fears from the masses.  We must take a long term and contrarian approach as the herd runs for the exit in this sector which is crucial to the future food supply of emerging nations.

To sell based on Uralkali may be exactly the wrong time to panic and may actually signal a bottom as investors rush to the exit.  Analysts across the board cut their ratings on the potash sector and one bank went as far as expecting a major exit by investors.  However, we may see just the opposite, major buying could come back into this sector.

In my opinion, one statement from one company is not enough to jump ship.  Although this has created uncertainty and ammunition for the shorts, we expected a counter-move by Belarus and the North Americans.

So short term we may have an oversupply where we should see demand increase.  This supply dump could be setting us up for a potential shortfall as production is cutback, demand increases over the next 3-5 years and as inflation threatens to rear its ugly head.

The move by the Russian to break away from Belarus may actually be a contrarian buying opportunity.  Since Uralkali, the Russian potash producer undercut the market and increased production to record levels, Asian and Brazilian demand jumped.

The price has surprisingly stayed above $300 despite the dump of supply and the prediction of sub $300 pricing by some analysts.  This may be signaling the smart money doesn't believe this supply dump by the Russians will be long lived or that there is major pent up demand that will soak up cheap supply.

Belarus has responded to the Russian breakup by arresting key employees of Uralkali as they believe they are trying to corner the Chinese market and what the company has done is criminal.  Some of Uralkali's North American competitors such as Potash Corp, Agrium and Mosaic are not concerned at all about the dispute between the former Soviet producers.

They believe it is just their negotiating style and the price will stay firm as demand increases.  Prices for some of the major North American producers have fallen significantly and this could provide opportunity to those who believe in the long term viability of potash as it is unlikely for Russia and Belarus not to come to an agreement.  This uncertainty may provide an opportunity to long term value investors.

It is important to note that for a few months now I highlighted Passport Potash (PPI.V or PPRTF) as a critical player for the United States and my only junior potash recommendation.  There is a method to my madness.

Passport Potash is critical as a potential domestic supplier to the U.S. which is the largest importer of potash with over ninety percent coming from abroad.  Passport Potash could be one of the lowest cost producers because it is a shallow deposit and a rail line runs right through the property.

Passport Potash may have a significant geographic advantage over others.  Even if Uralkali cuts prices it will have little to no impact on the American Heartland which is a long way from Russia.  Transportation costs are high compared to the product costs in potash.

Passport Potash was down much less than its peers and the majors after this recent development in the potash sector. This news from Uralkali may actually strengthen Passport’s position with domestic end-users who can not afford to transport cheap Russian potash and need a secure supply of domestic potash.

Remember Passport Potash was not scheduled to come into production for another three or four years.  A decline in the potash price may hurt current higher cost producers and developers and may actually benefit lower cost and strategic assets like Passport’s.   There may be a major cutback in production in the short term which could eventually sow the seeds of a supply shortfall in potash as the global economy grows over the long term.  Higher cost juniors could be hurt and may need to mothball their projects. 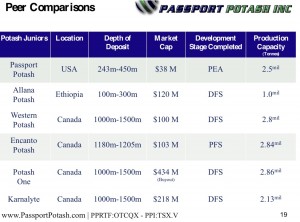 However, as I highlighted in the past, Passport Potash could be one of the lowest cost producers in the industry according to the recent Preliminary Economic Assessment.  Being located in Arizona, with great infrastructure gives Passport a unique advantage to be able to transport affordably its low cost potash.

The Uralkali move may have been a tactic to divert attention away from the North American juniors who were just attracting major interest from the Indians and Chinese who are major importers of potash.  Do not be misdirected by the recent news which may have been exaggerated my the media.

The long term trend higher for potash fertilizers continues and this recent downward price action may be a panicked reaction in which the shorts can profit.  Do not get caught up with the masses and remember the underlying fundamentals that the world will need more food to feed its rising population.  Diets are changing in emerging economies requiring higher protein.  Arable land is decreasing and limited.  Farmers will use increasing amounts of fertilizer over the next decade.

The death of the potash sector that the bears are signaling may be an opportunity for long term, contrarian investors.  Passport Potash (PPI.V or PPRTF) is uniquely positioned as one of the lowest cost potential projects in the Western World. 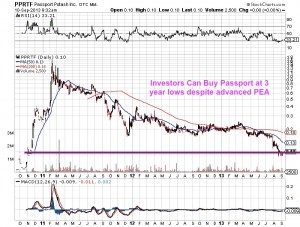 In early March, when I first highlighted the company before the PEA was published it appeared that Passport was bottoming and reversing higher.  Unfortunately, it made a false breakout above the 200 day moving average before reversing lower.  This means the bottoming process may take a few months longer than I expected.  We should remember that the longer the base the more powerful the eventual uptrend.

Passport Potash has an incredibly talented management team who I am impressed with and I continue to be a long term shareholder.   I recently published an interview with David Salisbury, Chairman of Passport Potash and we discussed the recent news by Uralkali and the impact on the potash sector.  Click here to view the interview or see the interview below.

David spent a long time with Rio Tinto.  He specialized in improving the mine operations and keeping costs low for the mining giant.  He has a ton of experience as CEO of Kennecott Minerals and Resolution Copper.

Disclosure: I am a shareholder of Passport Potash and the company is a sponsor of my website.