The miners have been hammered down to historic 1999 lows, while the U.S. banks and U.S. dollar reach new heights.  Many investors may be prematurely assuming that all is well with the global economic picture.  The fine tuning of the economy by the Central Banks and specifically Ben Bernanke appears to have been a major success to the masses. 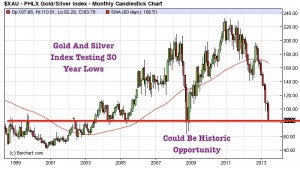 Commodities are cheap, interest rates are historically low and the U.S. housing, greenback and equity markets are near all time highs.  It seems that many of us, underestimated the powers of the Central Banks on the free markets to manufacture a recovery while suppressing commodity prices for the short term.  However, astute long term investors realize that this is the time to acquire real assets for pennies on the dollar.  Every action has an equal and opposite reaction.  Eventually, contrarian value investors will be rewarded.

Don't get confused by the Fed's bafflegab.  One week, Bernanke testifies in Washington saying easy money policies must continue to prop up a weak economy or else we could face a significant threat to this recovery.  The markets rally.  The next week, he says he may taper by 2014.  The markets fall.  The Fed appears to be micro-managing the markets.

Bernanke may have wanted to take a little froth off of the equity markets and prevent oil breaking the $100 mark.  Precious metals are now completely out of favor, which allows Central Bankers to continue devaluing the dollar.  Not allowing the free markets to balance itself out and these constant policy interventions could lead to unknown long term economic consequences.  Eventually, investors could lose confidence in paper assets and get "fed" up.

Remember Bernanke is on his way out and Obama is probably looking for an even more dovish successor.  Bernanke will be known for unleashing quantitative easing to boost housing and equities.

U.S. housing is now hitting multi-year highs.  Many homeowners destroyed their credit by walking away from their homes and capitulated near the lows four years ago.  We have witnessed a major "V" reversal in the housing and financial sector where the real losers were the ones who did not have patience and sold.  Learn from their mistakes in the resource sector, smart money picked up these assets for pennies on the dollar back then and are doing it now in the oversold resource sector.

Right now, we are witnessing a similar shakeout in the mining sector and precious metals. The losers will be those who capitulate and sell their shares to the smart money, which is now entering the precious metals and commodities sector.  Insider buying and major strategic investments by smart money is increasing.

Now the buzzword is tapering.  A few months ago it was fiscal cliff.  Tapering means to decrease gradually.  As interest rates rise from this purported exit, The Central Bank may do a 180 degree turn and continue to print dollars gradually to pay down enormous debts and keep pace with other devaluing currencies like the Yen.

We should begin seeing some bullish reversals in the junior miners as value investors continue to enter the sector.  It increasingly appears that we are near a potential secular bottom.

Don't be manipulated by the mainstream press scaring you with headlines about the economic troubles in China or that mining is dead.  Negative people may tell you that the financing markets have dried up.  That is not true.

Already we have seen major increases of Chinese investment in energy, potash and precious metals.  Here is one example.  This small company looks for opportunities on new and exciting ground and helps create new junior mining opportunities at the early stage.  A couple of their potash holdings just received major financial support from Chinese funds.

This may be indicating that some of the smartest minds are taking advantage of this discount sale in the miners.  Be careful of all the bearish headlines on the miners and follow the money.  There is capital for the right mining projects.  Real assets and commodities are historically the greatest hedges against inflation risk and monetary debasement.

Look to the companies that are attracting serious capital and institutional support.  I recently highlighted a new gold producer in Nevada who has had major value funds buying their stock over the past few months in one of the most difficult junior mining markets.

Investors should look for platinum and palladium projects in safe jurisdictions as the fundamentals are extremely strong with rising industrial demand for these catalysts and declining supply from South Africa.  This supply demand imbalance should impact the price over the long term.

Look for location and the major partners.  This junior miner partnered with Barrick on the southern part of the Cortez Trend just reported very good drill results intersecting good grades of oxide near the surface.  The company discovered a new Northern zone of high grade gold (6.1 meters of 5.62 grams of gold) and extended the central zone 400 meters.  Remember Barrick's Cortez Trend properties are the jewel of the operation with significant lower cash costs.

Watch the uranium space which is gaining a lot of attention as the Russia-US "Megatons to Megawatts" Program expires at the end of 2013.  Remember the U.S. produces around 4 million of the 55 million pounds consumed annually and has depended on these secondary supplies.  Japan is set to turn back on nuclear reactors this summer.  China is building new reactors.

The uranium price appears to be making a double bottom.  Remember the U.S. produces around 4 million of the 55 million pounds consumed annually.    It should be noted smart money is entering the sector in addition to Microsoft's Bill Gates.  Warren Buffet's Berkshire Hathaway took a stake in Chicago Bridge and Iron, which recently took over the Shaw Group, a nuclear services provider.  Could Buffett be signaling an opportunity in the undervalued uranium sector?

Keep a close eye on the near term uranium producers in Wyoming which appear to be turning the corner higher.  This junior uranium miner just announced that they should receive $20 million from the State of Wyoming to fund the start of production in the Powder River Basin.  Cameco just started additional production at their North Butte ISR mine which is very close to this junior.  Mark my words the Powder River Basin in Wyoming is a strategic area for the future of uranium production in the United States.

The new resource update this junior miner published showed a major increase in uranium and rare earth resources which boosts shareholder exposure to clean energy metals. Countries around the world are fighting air pollution.  The world we live in today is looking to reduce air emissions and the carbon footprint.  This could be a key project for Canada.

In conclusion, turn off the negative news that is broadcasted to misdirect and confuse investors.  Follow the capital to quality situations like these few examples which are building value during challenging times.  It is during these difficult times in the resource sector when the greatest opportunities are discovered.  Remember American Barrick Resources started off as a 16,000 ounce producer in the 80's down market in gold and grew to be Barrick Gold Corp, the largest gold producer in the world.